A Tour of Bilbo 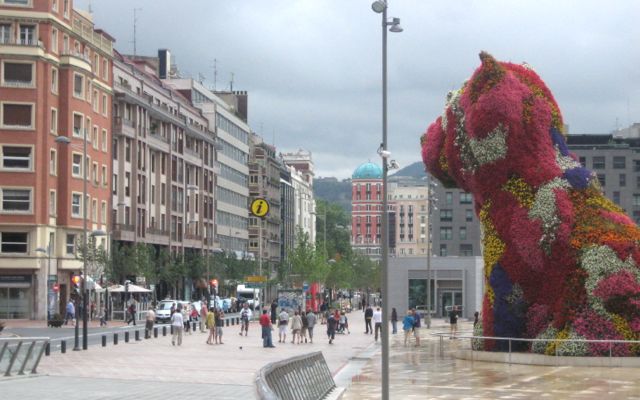 The flower puppy welcomes visitors to the Guggenheim Museum.

This video, produced by Vueling Airlines, shares some of the best spots of Bilbo in this video: the Guggenheim Museum, the beautiful scenery along the Nervion River, the Casco Viejo (old town) and the Mallona stairs. Bilbo, the Basque version of Bilbao, is the largest city in the Basque Country.

Bilbo is the capital of the Basque province of Bizkaia. It has a population of about 350,000, but increases to 1 million if the greater urban area is included. It is the largest city in the Basque Country. It was once a very industrial city with a polluted river, but this formerly gritty port city has undergone a major renovation, spearheaded by the construction of the Guggenheim Museum in 1997. Vueling connects Bilbo to cities throughout Europe, such as London and Paris.

During the 19th and early 20th century, it was the second most important industrial city in Spain, after Barcelona. Its salience began with the discovery of iron the the mountains around Bilbo and the exportation of the iron to other countries through the port. With its current renaissance, Bilbao has maintained its influence, now as a hip, trendy spot to visit.