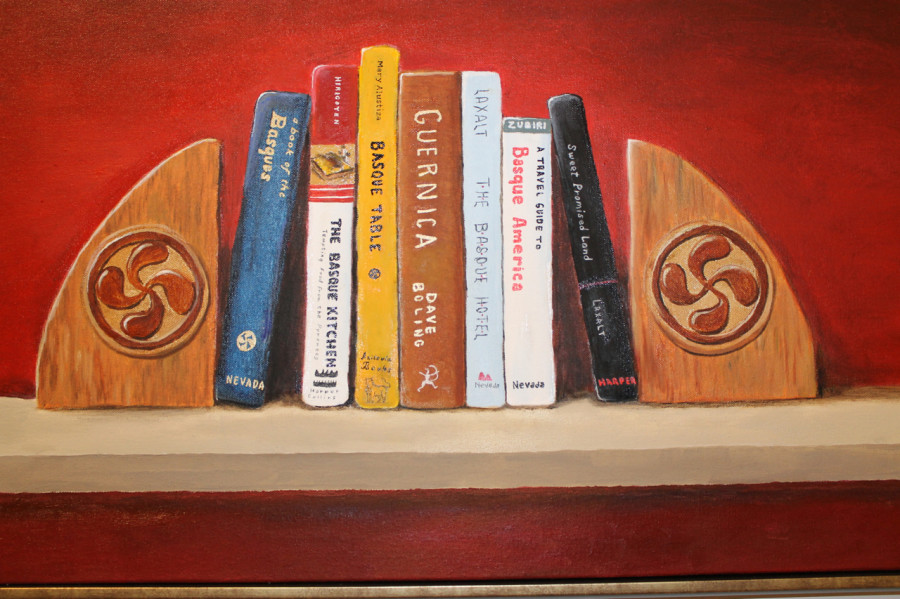 Basque-American artist Bob Ithurralde has an impressive collection of books about the Basque people and their culture in the library of his Salt Lake City home. But for this painting, which was part of an exhibit at the Northeastern Nevada Museum, he chose to paint seven of his favorite books on a shelf: one for each of the seven provinces that make up the Basque Country.

He also chose the seven titles because of their artistic value —- the color of the cover or the lettering on the spine, Ithurralde said.

“After you’ve read those seven books,” he said in a interview with Euskal Kazeta, “you’ll know something about the Basque people.”

**Disclosure: links below are affiliate links which means at no additional costs to you, we earn a commission if you click through and make a purchase. These are all products that we recommend.

Here’s an overview of the seven books, which you may want to add to your personal collection:

“A Book of the Basques” by Rodney Gallop

This book was the first significant literary documentary of the Basques written in English and it remained the most comprehensive work in English up through the 1970s. Up until that time, scholarly treatises on the Basques were mostly in French and Spanish. Keep in mind that the book only reflects on the Basque culture up through 1930, which was when Gallop published the book. Gallop was a Brit who came to live in the French Basque Country, married and settled there. The scholar discusses the origins of the Basque, as they were known at that time, and paints an accurate picture of the Basque character. As a folklorist, Gallop dedicates chapters to folk songs, the tradition of pastorales, the language and literature. Gallop has an easily readable style and captured a great deal of the essence of the Basques, which makes his book a highly enjoyable addition to a Bascophile’s library, even today. Click here to buy it from Amazon: A Book of the Basques (The Basque series)

“Those who come into contact with the Basques today have to put up with a good deal from their independence and obstinacy. When a Basque has made up his mind about a matter, threats will avail nothing and persuasion extremely little.” Rodney Gallop

“The Basque Kitchen” by Gerald Hirigoyen

This is probably the best Basque cookbook in English. Chef Hirigoyen owns the highly-regarded Piperade restaurant in San Francisco and has owned a few others. He is well-known for adhering to traditional Basque cuisine in his kitchen, but being innovative at the same time, which is reflected in his cookbook. The recipes span the gamut of cuisine, from appetizers to poultry, meat and fish dishes, to desserts. He uses a great deal of fresh fruits and vegetables. Hirigoyen has a copy of Ithurralde’s painting in the lobby of his restaurant. He quotes an old Basque saying in his book:  To know how to eat is to know enough. To buy the book from Amazon: The Basque Kitchen: Tempting Food from the Pyrenees, click here.

“The Basque Table” by Mary Alustiza

This cookbook is written by a daughter-in-law of Fermin and Agustina Alustiza, an immigrant couple who built and ran the Alustiza’s California Hotel in Stockton, initially with partner Saturino Garamendi, from 1924 to the 1980s. Read the history of the hotel here. Alustiza provides some wonderful history about the Alustiza family, plus background on the Basque culture. However, most of the book is dedicated to the “Treasured Recipes of the Alustiza Family,” which reflects many of the dishes that were served in the boardinghouse, which Basques referred to as a “hotel.” Many of them are “comfort food” fare and fairly easy to cook. I’ve made many dishes from this book, often finding all of the necessary items in my pantry. To buy the book from Amazon, click here: The Basque Table: A Cookbook.

“Guernica” is a well-written, realistic but fictional story of one extended family and their neighbors tragically affected by Germany’s bombing of the Basque town of Gernika. Boling slowly builds towards the main event, developing realistic characters that the reader cares about with great intrigue so that the reader is fully involved in the story by the time the bombing occurs. The novel published in 2008, the first by the Washington State novelist, does a great job reflecting historical details and also makes this a book that is hard to put down. Enjoy British actor Cumberbatch Benedict’s review of the novel “Guernica” on Youtube. He says “the book at its heart is a love story, not just romantic love, but love of family, love of tradition and love of a way of life.”

To buy this book from Amazon Guernica: A Novel, click here

“The Basque Hotel” by Robert Laxalt

The Basque Hotel is a semi-autobiographical collection of stories that reflect Laxalt’s youth, spent in his parents’ hotel in Carson City, with its collection of local characters, then later the family’s transition to life in a house. The stories, each with its  own message about  growing up, convey some of the classic Basque traits — pride, stubbornness  and dedication to hard work.
The main character Pete goes on a harrowing trek to the mountains to bring back a Christmas tree, survives a serious  bout of scarlet fever and experiences his first sexual experience in this sweet tale of a Basque-American childhood. Click here to purchase the book from Amazon.  Published by University of Nevada Press (Basque Series) 1993.

Naturally, I was thrilled that Ithurralde chose my book as one of the “favorites” of his Basque library. I may be biased, but I honestly believe that everyone in the United States who is interested in the Basque culture should own this book. It provides a grand overview of all the significant Basque communities in this country, with the history of each one included, including some that have faded away, such as Jordan Valley, Oregon and Shoshone, Idaho. All the important events and places to visit in existing communities such as Bakersfield, Boise and San Francisco are explained, making it easy for visitors to figure out what to do there. I talked to over 500 people in the course of my research, so that the information is real and personal, not just researched from books.The local restaurants, the annual festivals and any other sites worth visiting are included. The book reflects on early families in each community, the local clubs and how they started, plus the current activities. Click here to buy “Travel Guide to Basque America” from Amazon. University of Nevada Press (Basque Series) 2006.

Although this important book was first published back in 1957, it continues to fulfill its promise as a timeless classic on immigration. The late Robert Laxalt was the most prominent Basque-American author and he went on to write several more books, but for me, none had the strength and impact of his first book. This autobiographical story of his  immigrant father’s first trip back to his homeland left an imprint on me that I never forgot. Laxalt accompanied his father on that trip and his descriptions of the visits to the family farmhouse and with his relatives will be extremely familiar to any Basque son or daughter who has made that trip to their parents’ homeland. Laxalt, a journalist, had previously only written magazine articles and according to Professor William Douglass’s preface, had a hard time turning his remembrances into a book-length treatise. However, the end result was obviously sufficient. In order to write this review, I decided to reread the book, to see if my recollection of it was still valid. It was. Laxalt’s description of his father’s personality, so steeped in Basque culture, plus his realistic dialogue, make this an enjoyable read for anyone, even today. To go to Amazon to buy it, click here. University of Nevada Press (Basque Series) 1957.

“Laxalt speaks not only for the Basques, but for the Italians and Yugoslaves, for the Swedes and the Irish, the Portuguese and the Greeks — all our second-generation citizens. Rarely have they had a more eloquent spokesman.” Miami Herald

Ithurralde’s paintings were featured at the Northeastern Nevada Museum in 2012, in conjunction with the National Basque Festival in Elko. They were later exhibited at a local library in the Salt Lake City area where he lives. He continues to paint and is currently working on a “Basque Gothic” version of the painting American Gothic, with a Basque couple wearing traditional work clothes and holding a pitchfork. Ithurralde is an active member of the Basque Club of Utah. 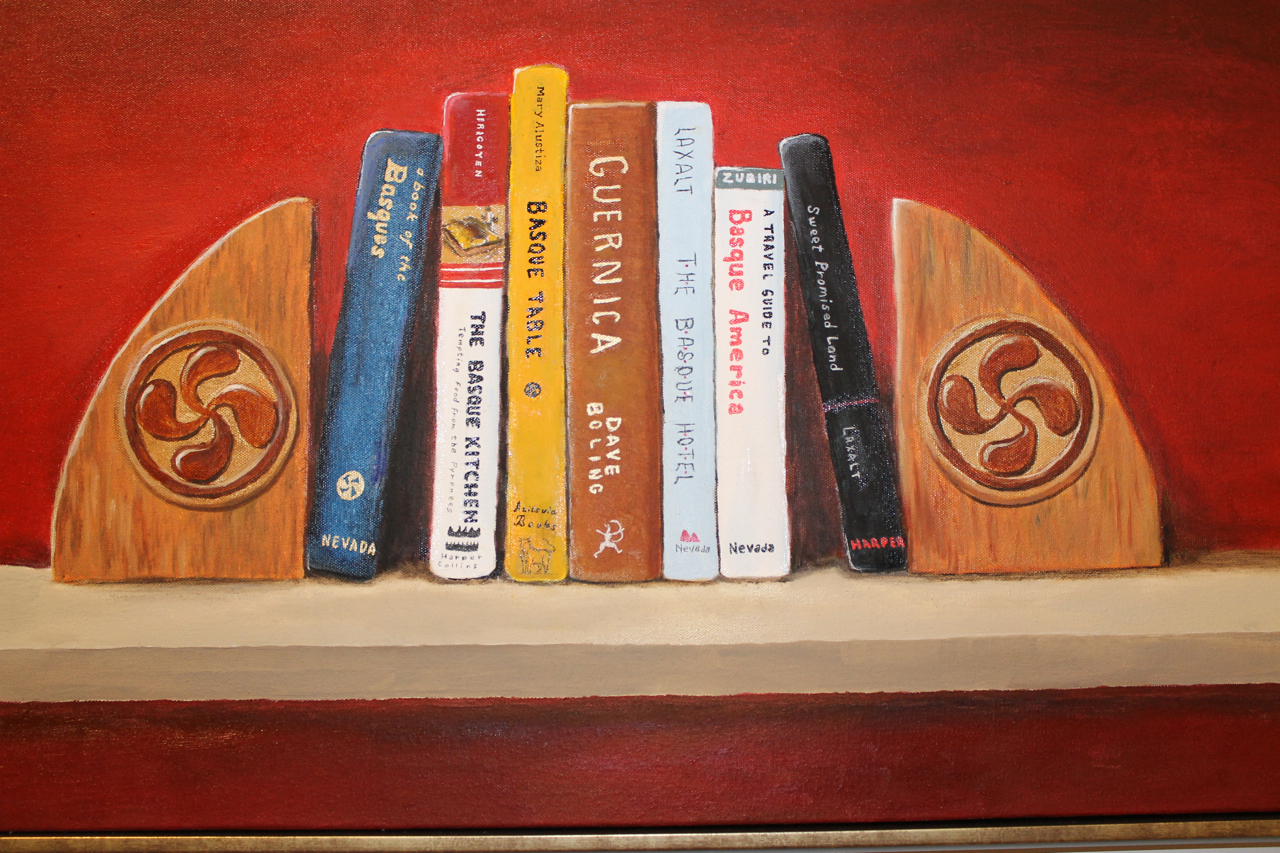