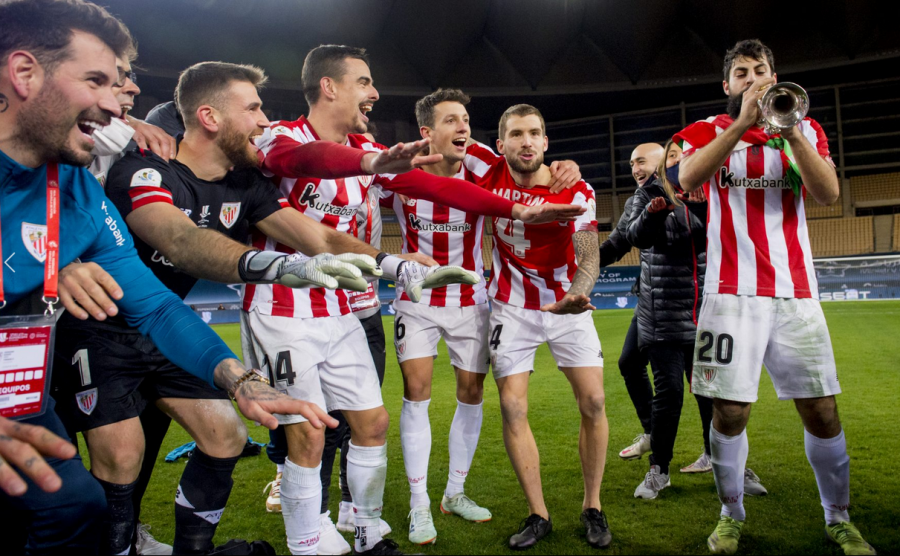 The Basque soccer team Athletic Bilbao is having a superb season. The team, which signs only Basque Country players, won the Supercopa de España against Barcelona Jan. 17. Athletic is also heading to two finals in the Copa del Rey (The King’s Cup). The first is on Saturday April 3, against Donosti’s Real Sociedad, a game that was postponed from the 2020 season due to the Coronavirus, and then the second on Saturday, April 17 against Barcelona for the 2021 finals. Both games will be played in Seville.

The April 3 game between Athletic Bilbao and Real Sociedad will be the first time the two top  teams in the Basque Country meet for Copa del Rey since 1910.

During the Supercopa game against Barcelona in January, Athletic won 3-2 during overtime. Barça captain Lionel Messi was sent off due to a red card for the first time in his Barça career.

Athletic qualified for the 2021 Copa finals on March 4 when it beat Levante 2-1. This will be the ninth time it goes against Barcelona in the Copa finals. The last time Athletic won the Copa del Rey finals was 37 years ago, in 1984, although they have been to the finals four times since then, the last time in 2015.

“This is one of the most emotional seasons of the last few years,” said Iker Goñi, a director with Athletic in an interview with Euskal Kazeta. “The biggest disappointment is that the fans won’t be able to enjoy it in the stands and if there’s a victory, we won’t be able to celebrate it together in the streets easily,” due to Covid restrictions.

The 121-year-old club is unique among Spain’s teams because it requires all members of the team to be from the Basque Country or have trained with a Basque soccer team during their youth. The Basque Country has several teams, including Real Sociedad, SD Eibar, Deportivo Alaves and Osasuna (Iruñea-Pamplona). None of the others have such a rule, although they do recruit heavily from the Basque region. Real Sociedad did have a Basque-only rule, but ended it in 1989. Real Sociedad, Eibar and Alaves are currently part of the first tier of La Liga. Alaves moved up in 2016 and Eibar in 2014.

Goñi attributes the team’s current success to several factors. “We have a lot of great players who are committed to winning and believe they have the ability to do it,” he said. He also points to the direction by the technical staff, including new coach Marcelino and the previous coach Gaizka Garitano, who led the team to last year’s Copa del Rey finals and the Supercopa final in January.

One of the team’s best players in recent years, Aritz Aduriz, retired last May after two stints with Athletic, the most recent which lasted eight years. The striker led them to their last Supercopa win in 2015.

When asked how the players feel about representing the Basque team Athletic Bilbao, Goñi cited the words of Aduriz during his interview upon retiring from Athletic:
“A thousand times I prefer to fight for this and indeed, a thousand times I prefer to lose for this rather than for something that I don’t believe in. I am convinced that Athletic is much more than a soccer team and more of an institution, and it shows every day by its supporters. From my point of view, there’s no greater fan base in the world, a fan base that supports and loves its team so much.”

The two finals can be seen on ESPN and ESPN Deportes.

Athletic’s California fan club @AthleticClubCal is currently planning a Basque Futbol Derby get-together for the April 3 games at the Basque Cultural Center (599 Railroad Ave., South San Francisco) at 11 a.m. for $10. See our events page for more info. The New York Basque Club announced on its Facebook page that it was hosting a viewing party at the Euzko Etxea at 3 p.m. Saturday, April 3 (307 Eckford St., Brooklyn).