Jean Flesher's band at Bakersfield festival 2016, before they became Amerikanuak

Accordionist Jean Flesher has been playing dance music at Basque festivals and parties for nearly 30 years. During that time, he developed relationships with several Basque musicians and would call on them to play at different celebrations.

Known as the Jean Flesher Orchestra, the members changed from event to event – depending on who was available, or who lived closest to the party. But regardless of who else was playing, Flesher and his accordion were the heart of the group.

Last year, the current band members decided to produce a CD of their favorite songs. 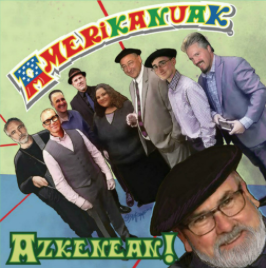 “Rene (Caballero) had wanted to record an album for such a long time,” said Flesher, referring to the drummer he first started playing with in 1989. Caballero was battling cancer. “It became apparent that the time had come,” said trumpet player Pierre Igoa.

For the CD, the group felt it was the appropriate time to establish a new name. “We wanted a name that reflected all of us,” Flesher said. The group decided on “Amerikanuak” — or “the Americans” in the Basque language Euskera. “Our music is not 100 percent Basque and it’s not 100 percent American,” he said.

The album, titled “Azkenean,” which translates to “Finally” in Euskera, was released at a party this past September at Noriega’s Hotel in Bakersfield

The album includes Caballero and Christian Iribarren, who were Flesher’s original band. They are accompanied by other musicians who have been playing with Flesher for many years. Igoa and Michelle Iturriria, both of Bakersfield, sing and play trumpet. J.P. Etchechury of Fresno plays the drums. Daniel Iribarren plays bass guitar and John Ehlis plays mandolin. Iribarren  plays keyboard and xirula. Flesher’s son, Jean Jules Flesher, at 18, is the youngest member of the band and plays pandero, castanets, maracas and congas.

Flesher, who lived in California before moving back to his hometown of Salt Lake City, Utah, has logged thousands of miles driving to play at the many Basque events. His wife and children usually make the trips with him. The distance between the musicians  means they only rehearse before each gig.

Amerikanuak is currently gathered in the San Francisco Bay Area for their second official concert — the New Year’s Eve party at the Basque Cultural Center. Tickets to the annual dinner and dance are sold out.

The album includes many songs Amerikanuak’s fans will recognize, such as “Hey Baby, Que Paso,” “Xalbadorren Heriotzean,” and “Andre Madalen.” The songs are in English, Basque and Spanish. “They’re the songs people have loved through the years,” Igoa said.

Robert Iriartborde, a music producer and engineer who owns Scenic Audio, offered to produce the album for the group. Iriartborde, a longtime friend of Flesher, also played drums with him on a handful of occasions.

Most of Amerikanuak’s music was recorded live in Iriartborde’s Redwood City studio within a few days in late 2016. Then Iriartborde did the mixing on his own. “I knew what kind of sound Jean was looking for,” said Iriartborde.

The toughest part of making the album was bringing in band members afterwards, to fine tune the tracks, he said, because they live in different places.

Despite his many years in the music industry, Iriartborde said this was the first Basque album he has produced.

The album was finally finished in summer 2017. Caballero was unable to make the September release party in Bakersfield because of  cancer-related complications. He passed away two weeks later. He was 46.

Amerikanuak decided it will donate all the profits from the CD to the Aita Tillous Fund, named after the Basque priest who served the Basque community for many years. The fund, overseen by the North American Basque Organizations, helps young Basques to attend the Basque culture and music camp Udaleku. “This wasn’t going to be about us making money,” Flesher said the band members concluded. It was about putting the songs down for posterity, for their kids.

The album is available for sale as a CD on the Amerikanuak website, where you can hear a bit of the songs. A digital downloadable version is available on CDbaby. com. The CDs will also be available on the summer Basque picnic circuit, through Basque Imports, and also at all of Amerikanuak’s shows. Recently, Chicago Music Magazine selected Amerikanuak as a band to watch for 2018.

Amerikanuak already has many appearances lined up for 2018. They’ll be playing at the National Cowboy Poetry Gathering in Elko at the end of January,  at the Basque Cultural Center anniversary party in February, at the Fresno picnic the first weekend of May, at the Bakersfield picnic on Memorial Day weekend and at the NABO convention in Winnumucca in mid-July. See Euskal Kazeta’s calendar for more information on the events. You can also follow the Amerikanuak Facebook page for the latest information.