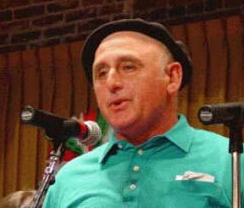 The following event was cancelled due to the Coronavirus19 pandemic.

Five U.S-based bertsolaris – singers of bertsos or verses– are going to be honored on Saturday, March 14 at the Basque Cultural Center in South San Francisco in a special tribute sponsored by the North American Basque Organizations (NABO). Two well-known bertsolaris from the Basque Country will also be performing at the Bertsolari Special Tribute Omenaldi Berezia.

Gratien Alfaro, Jesus Arriada, Johnny Curutchet, Martin Goicoechea and Jesus Goñi all live in the United States and have performed at Basque celebrations for many years. They will be accompanied by bertsolaris Sebastian Lizaso, a well-known champion from Azpeitia, and Aitor Mendiluze, a bertso teacher and also Basque Country champion.

The event, which is free, will include real-time on-screen English translation of the improvised verses, to make it accessible to non-Euskera speakers. The event is the 10-year anniversary of a similar event held at the cultural center on March 13, 2010, which commemorated the founding of the San Francisco Basque Club in 1960.

The 90-minute performance will start at 4 p.m. Cocktails will be served at 6 p.m. and dinner follows. Tickets to the dinner are $50 and should be ordered ahead. Send your RSVP to Kate Camino by March 5 at info@nabasque.eus or call her at (775) 241-3752. The Basque Cultural Center is located at 599 Railroad Ave., South San Francisco.

Basque accordionist Mercedes Mendive of Elko, Nev. will be playing after the bertso performance.

Four of the U.S. bertsolaris – Arriada, Curutchet, Goicoechea and Goñi — were honored in 2003 by the National Endowment for the Arts for their achievements in maintaining this revered form of artistic expression. They performed in Washington D.C. as part of the celebration.

The Basque competitors gather at festivals or among friends to face off in improvised lyrical duels. The singers are given a topic, which can be anything from immigrating to the U.S. to love or culture. One by one, the singers belt out their spontaneous poetry, usually sung to a simple folk melody. Their ability to pinpoint essential truths about life often move audiences to tears and laughter.

This poetical musical art is known as bertsolaritza in Euskera, the Basque language. The bertsos, as the compositions are known, are sung by a bertsolari. It’s a tradition dating back hundreds of years to the villages and hamlets of the Basque Country. In recent years, bertsolaritza has experienced a resurgence in the Basque Country, evidenced by the thousands of Basques who attend public competitions which lead up to the National Bertzolaris Championship, held every four years. The next championship is scheduled for next year, 2021.  Filmmaker Asier Altuna made a documentary “Bertsolaritza” in 2011 about the art.

The goal of the March 14 event is to recognize the bertsolaris who have sung at many Basque events such as Kantari Eguna (Day of the Singer) and the annual NABO convention “year in and year out,” said NABO president Philippe Acheritogaray. Arriada retired as a bertsolari several years ago, but he will be at the event. The other four will perform, which Acheritogaray noted is very rare. Usually just one or two of them will perform at an event.

“We’ve been lucky to have these 3, 4 bertsolaris for the last 30, 40 years,” said Acheritogaray. Lack of immigration from the Basque Country since the 60s means fewer Euskera-speakers will be around to perform the poetic art in the U.S.

Having the screen translation of the singing was an important component of planning the event, noted Acheritogaray. They are even bringing a bertsolari singer and scholar, Xabier Paya, to lead the translation team. Translation is even helpful for Euskera speakers, who may not always understand, due to a singer’s dialect or their poetic use of words.

A spotlight on bertsolari Martin Goicoechea

Bertsolaritza tribute to Father Tillous, the Basque priest who served the U.S. for many years.

US bertsolaris performing in New York with translation

An excellent English description of the art of bertsolaritza.

Bertso introduction to the 2016 Smithsonian Folklife Festival with English translation

In the Basque Country, an organization Bertsozale Elkartea was organized to maintain the art and the national championship. For the history of the championships, read this page.