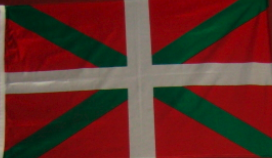 The Basque flag is a symbol of pride for many Basques

More and more often, Basque-American parents are choosing names for their babies that reflect their unique ethnicity. Among the more popular Basque names for boys are Xabier, Aitor and Mikel and for girls, some of the top choices are Amaia, Maialen and Maite.

This popularity has led Amazon to sell an e-book with over 60 pages of Basque names, which include the meaning of the names.

The names are in Euskera, the language of the Basque Country in France and Spain. The language dates back to prehistoric times and has no known linguistic relatives.

To research your family name, see our page with links to official records in the Basque Country.

Aitor – name of a legendary ancestor of the Basques; possible reference to good father (aita)

Ander – Basque form of Andrew, which refers to man, or manly.

Andoni, Antton – Basque version of Anthony, which originally was a Roman family name

Iñigo, Iñaki – Iñigo and Iñaki, a version of Iñigo, come from San Ignacio of Loyola, whose given name was Iñigo. Iñigo is also the name of the first king of Pamplona

Koldo – Basque version of Louis, the French form of Ludovicus.

Arantxa – nickname for Arantzazu, reference to the town with a sanctuary of the Virgin Mary. Also refers to arantza, thornberry

Maialen – Basque version of Magdalene, a reference to Mary Magdalene

Check out this popular Basque
hoodie from Amazon