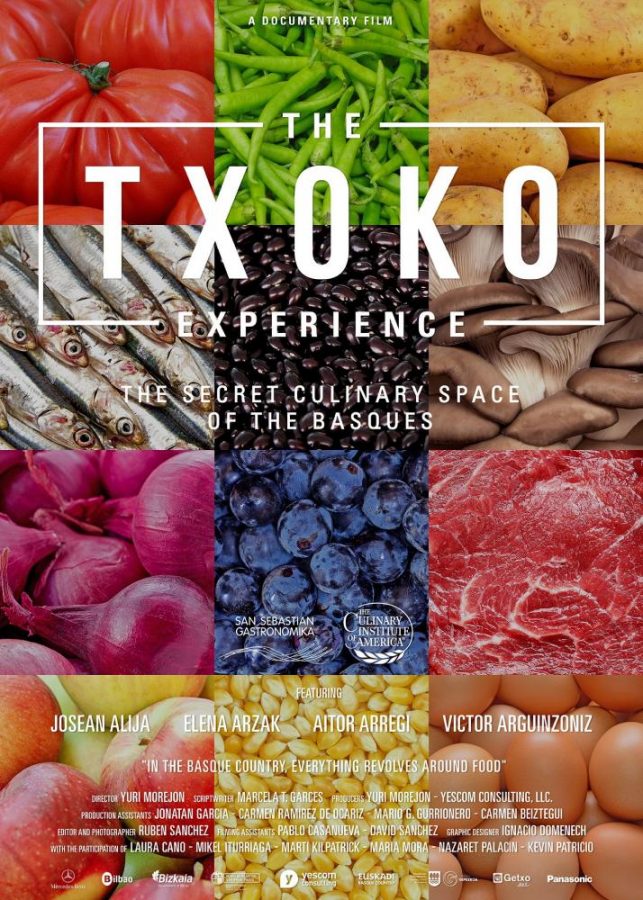 Movie poster for The Txoko Experience

This month, Yuri Morejon’s documentary film “The Txoko Experience” provides a unique take on the Basque Country’s private gastronomic societies, or “txokos.” It focuses on the celebrated environment where traditional and innovative meals are created. “The Txoko Experience” will be shown for free next Wednesday, Oct. 18, at the Culinary Institute of America in Hyde Park, New York. It debuted in Donostia, Gipuzkoa on Oct. 9.

Morejon, a political scientist from Bizkaia who lives in New York, directed this film. It is the very first gastronomic documentary in English spotlighting the txokos. With a cinematographic finish, the documentary shows the inner workings of restaurants owned by Elena Arzak, Victor Arguinzoniz, Josean Alija, and Aitor Arregi. The chefs in essence narrate the story of the txokos, with their emphasis on fresh local products.

At 42-years-old, Elena Arzak was named top female chef in the World’s Best 50 Restaurants list, along with her restaurant “Arzak” being one of the top ten places to eat anywhere.

“The award is – though she won’t say it – recognition of a step out from under the shadow cast by the colossus of Basque cooking that is Juan Mari Arzak,” reported The Guardian. Her father was once the most important chef in Spain, where he revolutionized the “new Basque cuisine,” or nueva cocina vasca. Elena mainly discovered her gastronomic style in food markets in San Sebastián. She found that modern food needed some of the traditional ingredients chefs used in the 90s. At Arzak in Donostia, they make sure to stick with their roots and keep the Basque culture alive within the cuisine.

Victor Arguinzoniz is also shown in this documentary with his self-taught cooking in his grilling restaurant Asador Etxebarri in Atxondo, Bizkaia. He says that when people eat at his restaurant they are eating “puro producto,” or pristine ingredients.

Arguinzoniz’ cuisine is ingredient-driven, made without any type of liquid nitrogen or hydrocolloids. One of his inventions in the kitchen includes a form of grilling that is capable of highlighting the natural taste of hyper-delicate foods. Arguinzoniz began his career serving traditional Basque grill-house dishes, but wished to take it up a notch. He created a mesh-like stainless steel saucepan that would make it possible to grill delicacies. This led him to designing a whole new set of equipment in order to make his culinary dream possible.

The Guggenheim Museum in Bilbao holds Nerua, a restaurant run by chef Jose Alija. Alija began cooking at the ripe age of 17 and has been able to develop a name for himself. Although his style is avant-garde, he likes to stick to tradition.

The foods Alija uses in his dishes is important to him, so keeping a strong relationship with his suppliers is key. His signature dish is white onion, cod and green pepper sauce, which was featured at the Maritime Museum for his use of cod, a Bilbao favorite. In 2009, he was also acknowledged as the Best International Chef by Identità Golose.

“Pedro, my father set up a culinary and economic revolution,” says Arregi in an interview with Mundo Deportivo. Although his father passed away, he says that Pedro is always present in Elkano.

The screening on Wednesday, Oct. 18 will take place at 7 p.m. at The Culinary Institute of America, 1946 Campus Dr. in Hyde Park.

Future plans for the documentary “The Txoko Experience” have not been released. See the film’s Facebook page to keep up with the latest news.