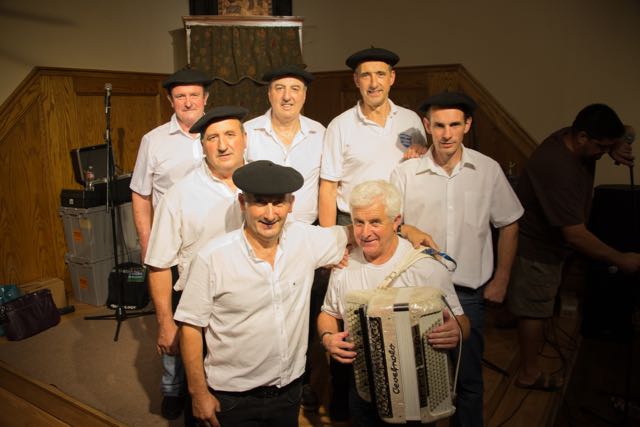 All photos by Linda Iriart

Visitors to the Chino Basque Festival this year enjoyed music and singing from several entertainers from the Basque Country.

The singers Menditarrak performed Saturday night, Sept. 3, at the Chino Basque Club. This group comes from the small town of Banka, in Nafarroa Beherea. Many California Basques come from the valley that includes Banka and were especially happy to hear the musicians. The group performed many traditional Basque songs.

An accordionist and guitar player accompanied the singers, who moved the crowd with several songs, in particular “Oi Ama Eskual Herria.”

Also on Saturday, two bertsolariak performed – one of them a 13-year-old boy whose father is a well-known bertsolari in the Basque Country. Aner Eguzkitze can’t compete yet in official competitions where singers create on-the-spot verses (bertsoak) on different topics because of his young age, but he is practicing his craft in anticipation.

Staying with the Bidart family in Chino for three weeks to practice his English, Eguzkitze wowed the crowd as he improvised alongside Jesus Goñi, a longtime bertsolari from Reno, Nev. Eguzkitze said he has been fascinated with bertzolaritza since he was five years old, watching his father, Xabier Eguzkitze, perform.

“I would watch him and I was interested,” he said, adding that he is the only one of the three Eguzkitze sons to follow in his father’s footsteps.

Accordionist Jean Louis Bergara and his drummer Beñat Chaubadindeguy played to a dancing crowd both Saturday and Sunday nights. Bergara, from the town of Larresoro, is a crowd favorite, since he knows many of the traditional songs that dancers enjoy like Mutxikoa and Ryan’s Polka. He visits often to play for different Basque-American parties.

On Sunday, the Chino Basque Club celebrated its 49th annual festival at the Chino Fairgrounds, starting a well-attended mass in the morning with Besta Berri characters in traditional costumes, plus the klika.

At the festival, the Menditarrak singers stood in the middle of Brinderson Hall for an impromptu performance as festivalgoers ate dinner.

Food is a highlight at the Chino picnic. Members tend the large barbecue twice a day so that festival-goers can enjoy steak and mashed potatoes for lunch, and then barbecued lamb and lamb stew for dinner. The Chino Basque Club prides itself on serving two barbecued meals during its festival. Then, in the evening, fresh homemade sausage sandwiches are also served.

Four different dance groups, that include dancers from the ages of 3 to 30, performed for the crowd in the afternoon.

To see the words of “Oi Ama Eskual Herria,” see this version of the song with Benito Lertxundi