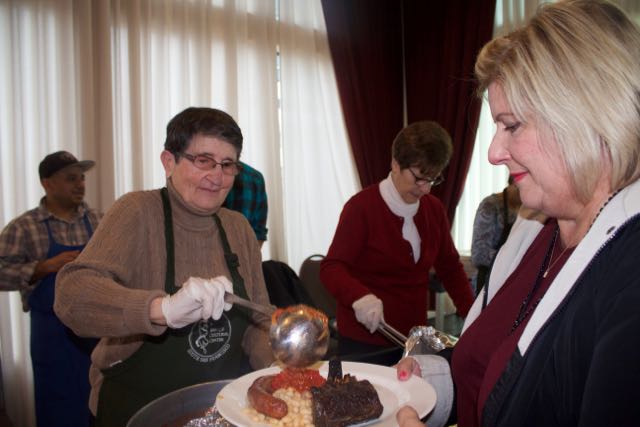 Rack of lamb, sausage and beans were on the menu Sunday.

The 35th anniversary of the Basque Cultural Center in South San Francisco was celebrated this weekend with handball games, a barbecue steak dinner and a rack of lamb lunch on Sunday. A few members braved stormy Northern California conditions to meet friends and family for the annual February event, and the wet winter weather may have kept some away.

Ketxo, a band from the Basque Country, serenaded the crowd during Saturday’s dinner, walking around the many tables set up in the kantxa. They later played dance music in the main hall, while a crowd of young Basques filled the dance floor with their high energy all evening.

“It’s hard to believe that it’s been 35 years and that the traditions are still being kept,” said Cultural Center board president Gracian Goyhenetche, who noted that he has been on the board of directors since 1979, when construction on the center first began.

On Sunday, the celebration included the presentation of three Bizi Emankorra awards. Goyhenetche said he was especially pleased to hand out the awards because he has worked closely over the years with the three honorees: Louis Marticorena, who was the restaurant manager for many years; Jeanne Mazaris, the longtime director of the Elgarrekin Choir and Angel Arriada, who was chairman of the center’s handball and pilota goma committee for many years.

The Basque Cultural Center opened on February 14, 1982 when Bay Area Basques decided they needed a permanent place to carry on their traditions, particularly handball. The center includes a large handball court, a banquet hall that is extremely popular for weddings, plus a highly rated restaurant and a Basque library upstairs.

Finding a location for the center and then building it was a long process that was not without controversy. (Read “Building a Dream” by Jean Gorostiague, first president of the Basque Cultural Center Board of Directors. Also, read the story of “a kantxa,” told by Ana Iriartborde.) Fortunately, Gorostiague and other members of the early construction team had the foresight to build a restaurant as part of the plan. Initially, the idea was to provide income to pay back all the loans that were offered by members to build the center. Today, the restaurant and the catering in the banquet hall provide plenty of income, but also expose the Bay Area public to the Basque culture and also keep a permanent staff on the premises that allows players to access the handball court when desired.