Dancers from California Perform in the Basque Country 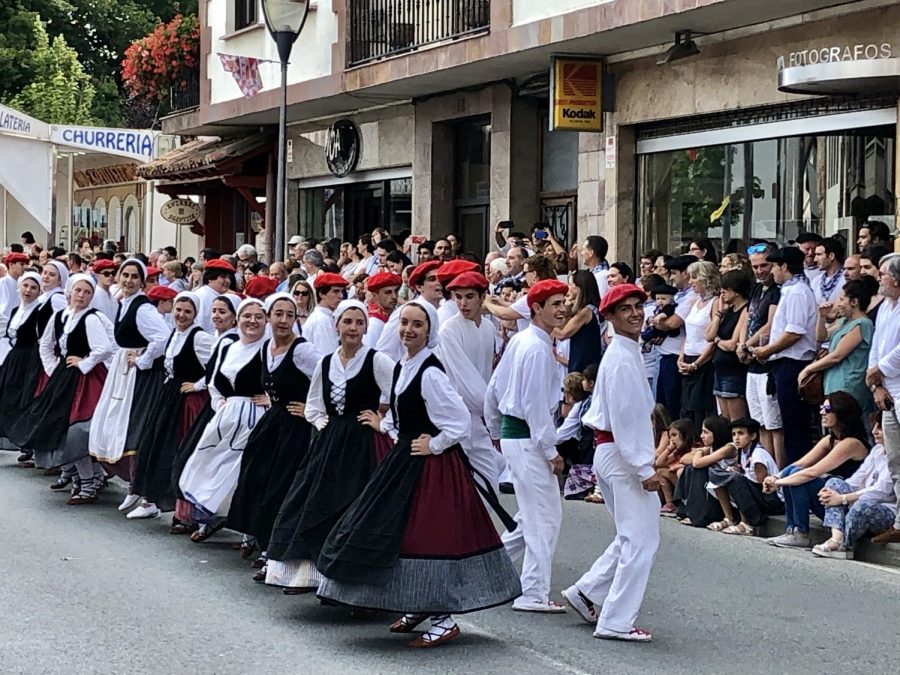 The California dancers traveled to the Basque Country to perform in the Baztan parade.

The original plan was modest: Bring at least eight dancers from California to the Basque Country to perform for the festival of the Baztan Valley – Baztandarren Biltzarra. But what transpired was far more successful than anyone could have imagined. Ultimately, 42 dancers from five different California Basque clubs participated in the annual parade and festivities on July 21 in the town of Elizondo in the province of Nafarroa.

“It exceeded our expectations,” said Maite Maisterrena, one of the organizers of the group. “I think everyone, including us, was surprised that there were so many of us.” They called themselves Kaliforniako Euskal Etxeak (California Basque clubs). Dancers ages 13 to 25 from the clubs of San Francisco, Bakersfield, Chino, Fresno and Rocklin participated.

Coordinating the details for such a big group was complicated. The majority — 25 — of the dancers were from San Francisco. So they used that group’s costumes and the other girls tried to match them. Boys wore the traditional white shirt and pants and red beret and waist sash, although some miscommunication led to a few green sashes, and “we just had to go with it,” laughed Maisterrena during an interview with Euskal Kazeta. Only three musicians were part of their group, so they asked for help from some local musicians.

The parade, which attracts dance groups from all over the Basque Country, lasted about two hours. The Kaliforniako group danced Bolant Dantza, Pasacalle and Dantza Luze and other dances.

“It was very touching for me to see them participate,” Idoya Urruty said of her 16-year-old daughter Naia and 14-year-old son Iban, both of whom dance for the San Francisco club. “Especially since both my parents are from Baztan and I spent many summers there as a teen.“

Along the route, spectators clapped and encouraged the performers with shouts of “Ongi Etorri” (welcome). The  parade traditionally includes carrozas (floats) made by people from the 15 towns in the Baztan Valley. The floats are elaborate representations that include live enactments of traditional Basque farm life. After the parade, people joined in the town square for mutildantzak, big circle dances that are traditional in the Baztan region. Then the participants and their families enjoyed a picnic lunch while listening to singers and presentations. That evening a dance on the handball court was lively, continuing until 5 a.m. with at least three different bands. That dance was a fun highlight for the youngsters.

Baztandarra Biltzarra lasts only one day, but the atmosphere in Elizondo on Saturday night, the night before, was festive. The bars were full, people were eating out in restaurants and bands were wandering through the streets playing their music.

“You couldn’t go anywhere without running into people you knew,” said Maisterrena. About 130 people from California made the trip.

The idea to participate in the festival developed last year, said Maisterrena, when she, Urruty and other mothers were chatting at the Gardnerville picnic, nostalgically remembering their younger days when they would visit the Basque Country in the summer and attend town festivals and often meet up with friends from the U.S. who were also there. They wanted to repeat the experience for their own children.

Inquiries led them to the Baztan festival, which was open to dance groups from anywhere and had an application for potential participants. Urruty applied  and they found out in October that they had been accepted. They  opened it up to dance groups from any California club because otherwise they thought they might not get enough dancers.

“We were very excited to be able to participate and once word got out to  the various clubs, our numbers kept growing,” Urruty told Euskal Kazeta. The distances between the dance groups made practice difficult, but San Francisco dance leader Valerie Arrechea scheduled three practices in the months before the festival, including one at the NABO festival in Bakersfield. Families also had to make their own hotel and flight arrangements, although many stayed at the same hotel.

The festival was a trip down memory lane for some of the parents who had participated in a similar performance at the Baztandarran Biltzarra 25 years earlier, including Arrechea, Rosemarie Caballero and Urruty, who played the accordion in 1993 and played for the dancers again this year.

In a speech during lunch, Urruty relayed to the audience that during that 1993 trip it had been the children of Basque sheepherders that performed and now it was the grandchildren of those sheepherders who had come back.

Most Basque immigrants in California came from the provinces of Baxe Nafarroa on the French side of the Basque Country and the adjoining province of Nafarroa in Spain, where the Baztan Valley is located. The valley includes the towns of Elizondo, Lekaroz, Azpilkueta, Erratzu, Amaiur, Oronoz, Berroeta, Elbete, Irurita, Arraioz, Arizkun, Aniz, Ziga, Gartzain and Almandoz. The dialect of the Basque language Euskera that is spoken on both sides of the border is very similar.

Watch this well-done video of the parade floats.

This is a 1 1/2-hour video of the entire parade. The California group performs at 7:38.