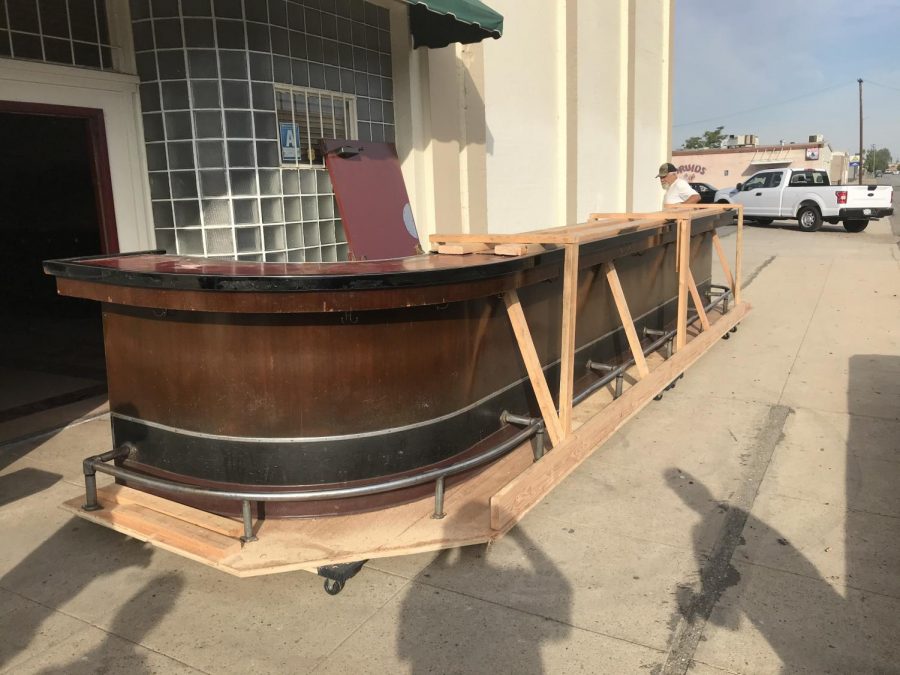 Outside Noriega's, the bar is prepared for moving to the Kern County Museum.

The Kern County Museum in Bakersfield is currently working on two Basque exhibits at its Pioneer Village setting. The staff is currently setting up the wooden back bar and bar moved from the recently closed Noriega Hotel in its Trolley Car Station and is also trying to recreate a real bakery in its French Bakery building.

The museum, which includes 16 acres of historic buildings, is one of the largest museums in California, according to museum director Mike McCoy. He was hired as the director three years ago and has said he wants to improve the museum’s representation of Bakersfield’s Basque community.

When the Noriega Hotel – the 1893 boardinghouse-turned-restaurant — prepared to close last month, several donors made contributions that allowed the Kern County Museum to buy the historic bar and back bar, which was originally brought from Fresno in 1940. With the help of volunteers and a crane, the museum moved the wooden bar to its location at 3801 Chester Ave.

Noriega’s owners received several offers from people interested in the bar and McCoy was happy it went to the museum so it could continue to be part of the community. He told Euskal Kazeta that he has a photo of himself at the bar when he was two years old and his family had strong connections to the Elizalde family that owned the Noriega. Read about the closing of Noriega’s.

“If you had to put the bar some place, this was the perfect place,” he noted. McCoy said he expects the bar to be ready for use by Sept. 1.

The bar was placed in the Trolley Car Station, a large bright yellow hall which can be rented for wedding receptions and parties. “A trolley car that used to run in front of the hotel is in the station,” said McCoy.

The museum also owns the French Bakery building, a precursor to the Pyrenees French Bakery, that was built in 1912. It’s part of Pioneer Village — an outdoor area of 60 historic buildings. The former bakery has been used as a museum dress shop for many years, but McCoy is spearheading a plan to turn it back into a bakery, with bakery ovens and racks. He needs to raise $20,000 for the project.

The museum acquired the bakery building in 1961, along with the bakery racks and safe that were part of the original bakery. McCoy wants to recreate the interior bakery from the 1910-1912 era, complete with baskets and bread.

McCoy has been the director of the museum for three years. He is a retired school superintendent and has a background in fundraising and historic building renovation. He grew up in Bakersfield and has “a lot of Basque friends.”

The museum is accepting donations for the bakery project. Anyone wishing to send donations to the museum should specify on the check if they want the money to go to the French Bakery project.

The museum also has another Basque highlight that is worth seeing during a visit – the former neon sign that hung outside Amestoy’s Bar, which is now in the museum’s Neon Courtyard. The Amestoy family was a well-known Basque family in Bakersfield, which also ran Noriega’s for a short time and the Amestoy Hotel before opening the bar. Read Bakersfield Californian’s story about the sign, whose restoration was paid for by donors. The bar, which stood on River Boulevard in East Bakersfield neighborhood for 70 years, finally closed down in 2019.

To read more about the Basques in Bakerfield, here are some links to books from Amazon: