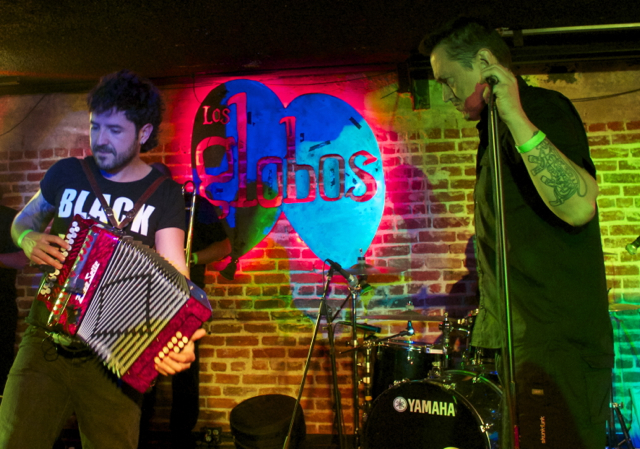 Fermin Muguruza is one of the few Basque Country musicians with a worldwide following. As a result of taking his rock music abroad for 30 years, he’s accumulated a substantial fan base.

Currently in the middle of his latest tour No More Tour 2013, Muguruza is scheduled to play in several cities on practically every continent. He’s already hit many European and Latin American capitals. With his eight-member band, known as Fermin Muguruza Kontrakantxa, the politically radical musician played June 12 in Los Angeles and June 13 in New York City, where he is also presenting a screening of his documentary music film “Zuloak.”

Muguruza, from Irun, Gipuzkoa, has  20 albums under his belt. He has sustained the popularity for his changing punk, rap, reggae, hard rock music style despite singing only in Basque. Indeed, Muguruza said his touring is a way to show his peers that a musician from the Basque Country can tour globally despite performing in the minority language. As an analogy, he noted that as a youngster, he loved music in English despite not speaking the language.

“I didn’t need to understand the language to know what they wanted to tell me,” he told Euskal Kazeta in an interview in Spanish before his Los Angeles concert. Although he admitted that he sang in Spanish with his first band Kortatu in the 1980s, he made a promise to himself that when he learned Euskera, “I would sing in Euskera.” Promoting the Basque language is just one of the political stances that he advocates for fiercely in his role as an international musician, among them human rights and social justice. His music is a vehicle for his message.

Throughout his 30-year career, Muguruza has worn his leftist political views on his sleeve. Lyrics of his songs take the side of the oppressed and many liberal causes, including independence for his homeland. He does not shy away from controversy. Indeed, he seeks attention for his many causes through the places where he plays — i.e. Palestine — to statements he makes during his show, such as criticizing the recent killing of an anti-fascist teenage protestor in Paris, and by the sign he displays during his concert demanding that Basque political prisoners in Spain be brought back to the Basque Country.

As a result of his exposure to and interest in the many places and musicians he’s interacted with, his music and the bands he’s played with, including Negu Gorriak and Dut, has changed through the years. He’s integrated hip hop and reggae into his repertoire. One of his most popular albums is Euskal Herriko Jamaika Clash.

Why this ambitious five-month tour now? Muguruza, who turned 50 this year, said it was time to tour after six years of working mostly in film. Muguruza has spent much of the last few years working on the production end of the business, including some film documentaries about Arab dance. He  also produced a film last year about a punk rock band, “Zuloak,” which he is also promoting during this tour.

Although he’s spent more time recently as a filmmaker, he points out that the work has focused on music, integrating his interests. But after a seven-year break from touring, he felt it was time to go back. He has a younger audience now that has been listening to his music, “and I wanted to greet these youth.”

Asked about whether he has done any sightseeing while on tour, he replied “we’re working. A tour is not a vacation.” However, he added, he enjoys what he’s doing, because being a touring musician is “maybe the best job you could have.”

Guitarrist Oskar Benas, who’s been playing 15 years with Muguruza, agrees. “I love to play and travel,” he said. “What a treat.”

Coming up on the No More Tour 2013 schedule: Montreal, Canada, Sydney, Australia and Tokyo, Japan, along with more stops in European cities.

Before the L.A. concert at the Silverlake club, during sound testing and scheduling discussions, numerous local friends approach to give Muguruza a hug. He is playing with the Mexican punk band Tijuana No, whose second album he produced.

The mixed audience, with quite a few Mexican-American followers of Tijuana No, responded enthusiastically to Muguruza’s music, joining in on the repetitive hooks. A sensitive performer, Muguruza spoke to the crowd in Spanish. “No cruzaron la frontera, la frontera les cruzó,” he announced to resounding applause.

When the Basque band finally left the stage, the crowd called him back for “otra, otra,” and the band gave them two more songs. The band ended its repertoire with its popular “Sarri, Sarri.” The song, quintessentially Muguruza, is originally a cover of the music of the Jamaican Toots & the Maytals’ song “Chatty Chatty,” but with a Basque twist. Written when Muguruza was with his original band Kortatu, the Basque version tells the story of two Basque political prisoners who escaped, and the controversial song has prompted boycotts of Muguruza’s music through the years. Nevertheless, his rejection of his detractors is clear, as he energetically led the bouncing crowd in the infectious chorus “Sarri, sarri, sarri sarri, sarri.”