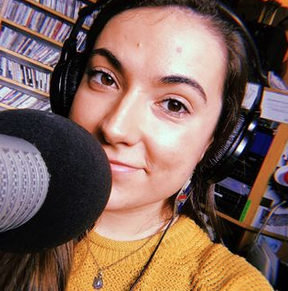 Madalen Bieter Lete is the Basque voice on the radio. The Boise native runs a weekly Basque music radio program, Taupada Irratia, at the University of Montana’s radio station in Missoula. She created the radio program at Boise State in 2017 and now has recreated a similar program at KBGA College Radio after enrolling at the university for graduate school.

The radio program, presented in the Basque language of Euskera, showcases a variety of Basque music. “All the music is from Basque artists or related to the Basque diaspora,” explained Bieter. It’s online, which means anyone anywhere can listen to it. It’s currently scheduled on Fridays from 12 to 2 p.m., Mountain time.

“I know there’s an audience out there, but because I can’t see them, it takes out a level of self consciousness,” said Bieter about her role as a deejay. She said her song selection represents a wide variety of music, from the latest popular hits in the Basque Country to traditional accordion and tambourine duos.

Bieter is a native Euskera speaker. Euskera was her first language. Her mother is from Renteria, Gipuzkoa, and her father, who is born in the U.S., learned Euskera with his family in a year-long study abroad program.

“I visited my mom’s side of the family and kept it up to talk to my grandparents and my cousins,” Bieter said. She also reinforced her language skills by attending a Basque immersion boarding scbool program, known as a barnetegi, for a three-week stint and day classes at an euskaltegi.

Bieter enjoys sharing Basque music, which is her core connection to her Basque culture. She promotes her program through her Instagram taupa.da and the Facebook page Taupada Irratia.
Bieter, who pursued a Basque Studies minor at Boise State, learned of an open slot at the campus radio station and created Boiseko Taupada in fall 2017. Bieter said her mother, Nere Lete, encouraged her to start the radio program. Lete is a professor at Boise State University, where she teaches Euskera and heads the Basque Studies program.

Bieter graduated from Boise State in 2017. When she graduated, a group of graduate students from the Basque Country took over Boise State’s Taupada program for a year, and then her mother, Lete, and Asst. Prof. Ziortza Gandarias, who both teach in Boise State’s Basque program, continued it for another year. The Boise program doesn’t have a current time slot on the radio, so it is only on Facebook right now, but they are hoping to get a slot for the fall semester.

Bieter is carrying on a Boise Basque radio tradition that was started many years ago by Espe Alegria. “I tried to use her as inspiration to get a show up and running,” she said. Alegria ran a one-hour weekly radio program in Euskera called “Voice of the Basques” in the Boise area from 1951 to 1981 and Bieter notes that she often announced personal messages, like birthday greetings. One goal of Alegria’s radio program was to ease the loneliness of the Basque sheepherders who led solitary existences out on the range with the sheep and spoke little English. Alegria, who also worked as a translator and provided support services for immigrants, helped preserve the use of Euskera in Boise and the surrounding Treasure Valley.

One day, Bieter recalled, the Boise State radio broadcasting system went down. “The only way you could listen didn’t work,” remembers Bieter. “I was freaking out.” So Bieter decided to experiment with a live Facebook stream instead. She was pleasantly surprised to see that the show was decently popular. Several people watched during real time, and the Facebook video later got 1,200 views. So she continued the live Facebook presentations, and the weekly live stream attracted regular listeners. She said the majority of her personal network is Boise and Basque Country-based, but she’s also seen people from around the globe. Listeners can currently tune in locally via the radio dial at 89.9 FM, online at the radio station’s website or at the Taupada Irratia live stream on Facebook, where “you can watch my silly dance moves.”

During the Covid pandemic, the Missoula university’s radio station temporarily closed down. Bieter, who moved back home to Idaho for part of the time, did not want to simply cancel her program. She’s thankful the team at the radio station was committed to helping its deejays host their programs remotely. “They’re still on the hook for the radio programming,” she noted, and they supported her as she figured out how to run the program from her computer. She’s back at the station now, but must still wear a mask. “I hope to have fewer challenges in the future,” Bieter said.

The Taupada program also has a Spotify account, with several Basque music playlists. Look them up under Taupada Irratia. The playlists show the development of the program. Bieter’s learned a lot about Basque music and her tastes have changed since she became a deejay. “I’m definitely playing more different music than I did at the beginning.”