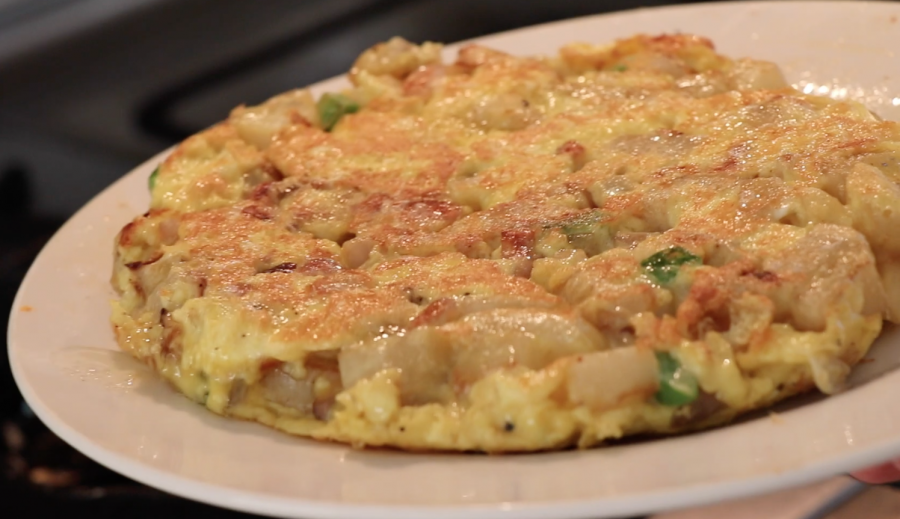 Tortilla de patatas or potato omelet is a common dish throughout the Basque Country, although it is more often eaten in Hegoalde (the Spanish side) and is sometimes referred to as “tortilla Española” (Spanish omelet). You will find it in almost every bar, served on a slice of baguette as a pintxo. It’s often eaten on a small baguette as a morning sandwich.

Tortilla de patatas is healthy, having plenty of protein due to the egg. The addition of potatoes are an easy way to stretch the eggs and create an inexpensive meal.

According to Wikipedia, the origin of the potato omelet may be Basque.

Potatoes are not native to the Basque Country. They were brought to Spain and England from Peru, by early sailors to the New World during the 1500s. They quickly became a staple in Europe.

According to Wikipedia, the origin of the tortilla de patatas is attributed to the Basque because the first written reference to the tortilla is found in a document from the Basque province of Nafarroa, in the form of an anonymous contribution known as “memoriales de ratonera.” The local citizens were invited to write notes to the civic leaders and deposit them in any mailbox (known as the “ratonera” or mousehole) whenever the court met. The note from 1817 explains the sparse conditions of the farmers in Nafarroa, contrasted with the residents of Irunea-Pamplona (the capital) and la Ribera (in southern Nafarroa). The note refers to how little food the farmers had, then describes “…two to three eggs in tortilla for 5 or 6 [people] as our women do know how to make it big and thick with fewer eggs, mixing potatoes, breadcrumbs or whatever.” So the point of the potatoes was to extend the dish, not using as many eggs and providing more servings.

A different story of its origin, also from Wikipedia, claims that during the siege of Bilbao, Carlist general Tomás de Zumalacárregui invented the “tortilla de patatas” as an easy, fast and nutritious dish to satisfy the scarcities of the Carlist army. Although it remains unknown whether this is true, it appears the tortilla started to spread during Spain’s Carlist Wars (1833-1849).

Instructions
In Spain, they will cut the potato in half or fourths the long way, then cut into thin slices. I prefer diced, as in home fries, but the cut of the potatoes is really up to you.

Put a healthy amount of olive oil in your frying pan, enough to create a layer for the potatoes to cook in, and wait until the oil gets hot. Add the onion, garlic, bell pepper and potato. Press into a single layer, stirring occasionally. They should cook at a medium flame until the potatoes are fairly soft.

While the potatoes are cooking, break your eggs in a bowl and whisk together. Add salt and pepper.

Once the potato is slightly soft, drain a bit of the oil out of the pan. Or if it’s easier, pour the potatoes into a colander (allowing the oil to drip into a pot for later use), then put them into the bowl with your eggs. This is often how it’s done in Spain, where they use 2-3 cups of oil to cook the potato.

Pour the egg mixture into the frying pan. Immediately stir the eggs and potatoes briefly. This helps keep the egg from sticking to the pan when you flip it.

When the eggs are mostly cooked, place a plate over your pan. Turn off the fire and turn the pan over, holding the plate against the pan. Hopefully, the omelet comes out in one piece, but don’t fret if it doesn’t. Put another tablespoonful or two of oil in the pan and give it a half a minute to heat up. Then slide the omelet back in the pan, runny side down. Now it only needs a couple of minutes. Again, turn off the flame and place your plate over the pan and flip it over for the final presentation.

My dad knew the perfect point of cooked egg and he often threw a small version of this omelet into the air to flip it. Perhaps that is part of my infatuation with this classic dish. I have tried to air flip it, but not very successfully. If you do want to try this, make sure you try it with a very small omelet.

Tortilla de patatas is great served for dinner with a loaf of French bread and a fresh salad.

Our Basque parents, being immigrants to the U.S., had their trials and tribulations as they adapted to life in a country where they didn’t speak the language. My dad enjoyed telling the story of his brother, Jean Pierre, during one of his first visits to a restaurant in the U.S. He looked at the menu and didn’t recognize anything, until he saw the familiar word “tortilla,” so he ordered it. His knowledge of the tortilla was the version from Spain, which is an omelet and he knew he would enjoy an omelet. What he got was a Mexican tortilla – a flat corn tortilla. They must have had a good laugh over that one.