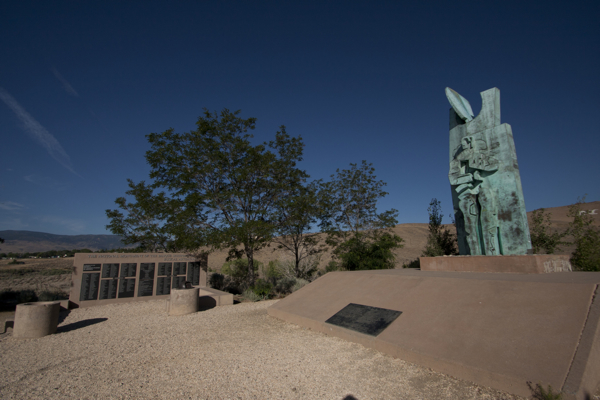 The Sheepherder Monument has been restored in time for the Reno Basque festival. Photo: Jillian Stenzel.

Bronze plaques stolen in 2011 from the National Monument to the Basque Sheepherder in Reno have been replaced with more durable steel ones.

The theft of the five original plaques, which took place in early January 2011, shocked members of the Basque community. The plaques were engraved with the names of hundreds of sheepherders and were anchored next to the towering statue called “Bakardade,” or Solitude, which is the centerpiece of the monument erected in 1989.

Police said they suspected that thieves removed the bronze tablets with a pry bar and sold them to recyclers. No arrests were made. The new plaques are anchored more solidly and are made of steel, which is less valuable to potential thieves, according to officials involved in the effort.

The cost of replacing the plaques was covered by the insurance carrier for the Washoe County Regional Parks system, which oversees San Rafael Park where the monument is located.

Park officials received a list of hundreds of names inscribed on the original plaques from University of Nevada Reno Professor Carmelo Urza, author of “Solitude,” a book about the monument that contains the names.

“The plaques are beautiful,” Urza said, “and the site once again provides a permanent tribute to the story of Basque emigration to the United States.”

The 22-foot statue, which overlooks the monument on a scrubby hillside, was created by acclaimed Basque artist Nestor Basterretxea. The abstract work of art features a shepherd carrying a lamb over his shoulders under a full moon. The monument was built to represent not only the sheepherder but his descendants in the American West and Basques everywhere.

The abstract design of the statue initially sparked a controversy when it was first proposed. But it came to be accepted as a fitting memorial to the enterprising nature of the Basque herders who roamed the West with their flocks of sheep. About half of the $350,000 for the project came in checks from across the U.S. from Basque Americans who requested their fathers and grandfathers’ names be inscribed.

In August 2009, as the monument neared its 20th anniversary, Euskal Kazeta reported that vandals had scarred the statue with graffiti and that interactive signs designed to guide visitors through the site had been marred by vandals or weather. The report noted that the monument’s isolated location made it a relatively easy target for crime and vandalism.

After the plaques were stolen, Euskal Kazeta followed the replacement efforts with several articles. Andy Mink, a district manager for the park system, acknowledged in previous interviews with Euskal Kazeta that the process to replace the plaques was not moving as quickly as he would have liked.

Mink said this week that he and Urza worked with New Jersey-based NW Sign Industries over a period of months to correct misspelled names and blank spaces before the new plaques went up.

“It was a long time coming,” Mink said, “but it was a good opportunity to get names corrected. Hopefully it’ll stay up for a long time now.”

Urza said the timing of the new plaques is ideal, noting that the Reno Basque Club will hold its annual picnic on Saturday, July 21. Visitors to the event can check out the restored monument. The turnoff to the monument is located north of McCarran Blvd. on North Virginia St. in Reno.

In recent months, other descendants of Basque immigrants have asked about adding the names of their relatives to the plaques. NW Sign Industries is helping with the creation of an additional plaque for those who wish to add their names or to honor those of their loved ones.

Anyone seeking information about adding a name to the new plaque is asked to contact leanne@usac.unr.edu.

Bertsolari Johnny Curutchet visited the monument soon after the plaques were restored and sang a bertso, recorded by J.P. Barthe.