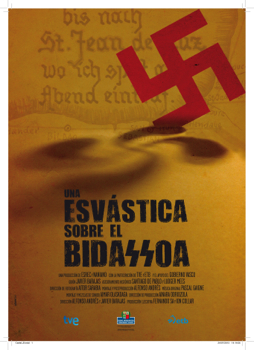 A World War 11 documentary that premiered at the 2013 San Sebastian Film Festival explores the interest of top Nazi officials in the unique Basque culture and its mysterious origins. The film, “Basque Swastika,” will be shown at the Basque Cultural Center on Friday, March 6. (It was originally set for April 10.)

“The Basque Swastika” relies on rare archival footage, historic documents and eyewitness accounts to feature an interesting look at Basque resistance and cooperation with the Nazi occupiers.

The film is part of the San Francisco Basque Film Series, which also includes “Jostunak” on April 10 and “Señales de Vida” on May 1. The films are shown at the Basque Cultural Center at 7:30 p.m. and are free. The center is located at 599 Railroad Ave. in South San Francisco.

The 80-minute film was directed by Alfonso Andrés, whose career began at Teledonostia and has worked on several film projects, and Javier Barajas.  Barajas has written screenplays for documentaries including  “Los Vascos y la Segunda Guerra Mundial” and “La Joya del Cantábrico.”

After Adolph Hitler’s military defeated France in 1940, German scouting troops arrived at the Bidasoa River near Hendaye. This paved the way for the arrival of Nazi forces that occupied parts of the Basque Country until 1944, according to the film.  Among those who visited the Basque Country was Heinrich Himmler, head of the Gestapo and one of the most powerful figures in Germany.

Among the footage used by Andrés and Barajas is a short Nazi propaganda film titled “”Im lande der Basken,” or “In the Land of the Basques.”  It was produced by noted German director Herbert Brieger, whose son is featured in “The Basque Swastika.”

Other compelling footage shows German planes crashing at the beach at Donostia, or San Sebastian, and Nazi soldiers enjoying rest and relaxation on the sand at Biarritz.

Even though the Basques opposed Spanish dictator Francisco Franco, who was supported by Hitler, several commentators in the documentary say that the Nazis viewed the Basques as one of Europe’s  “purer” races.  The Basques were neither French nor Spanish, which in the view of some Nazis meant that they were not tainted by  impurities of other cultures, according to the film.

Critics who saw The Basque Swastika at the festival, such as this writer from The Hollywood Reporter, described it as eye-opening and well-received by audience members.

View the trailer for The Basque Swastika: