New York Basques started a club in 1913 and have managed to keep it going for over 100 years. 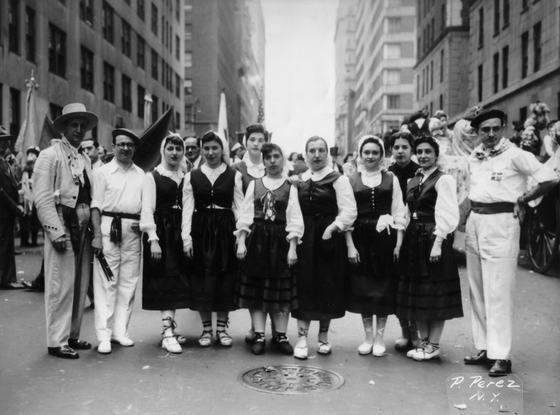 The New York Basque Club will celebrate its centennial anniversary this month with a week’s worth of events and festivities, including an appearance by the Basque President.

“I think there’s going to be something for everybody to enjoy,” said New York Basque Club president Aitzol Azurtza. The celebration begins the evening of Monday, Oct. 7, with talks on languages and communities at the City University of New York on Fifth Avenue. The following day, a smaller discussion will take place at the Eusko Etxea about the relationship between the Basque Country and Germany. Then, on Oct. 9, author Mark Kurlansky will speak, followed by a piano concert in honor of the late Mikel Laboa at the John Jay College of Criminal Justice Black Box Theater.

On Oct. 10 and 11, several notable Basque scholars will hold roundtable discussions on the history of Basques in New York at Columbia University and at the Euzko-Etxea of New York in Brooklyn. Friday evening ends at the Euzko-Etxea with a concert by Kalakan.

Saturday is a also a full day with the tri-annual meeting of the North American Basque Organizations in the morning, dance and singing performances at East River State Park in the afternoon, and a prepaid dinner for 75 at the Eusko-Etxea. The president of the Basque government in Spain, Iñigo Urkullu Renteria, will arrive in the afternoon and is expected to attend the park event, said Azurtza.

Sunday, Oct. 13, will begin with a morning mass at St. Patrick’s Cathedral, followed by Basque dances and a picnic in the afternoon. President Urkullu will be participating in Sunday’s events. The main centennial gala will take place in the evening and feature music from Kalakan of the Basque Country, Amuma Says No from Boise, and soprano Amaia Arberas. President Urkullu will be speaking to the guests, and the Basque club will be presenting him with a plaque. This is also a prepaid event for ticket holders only.

Finally, on Oct. 14, a Basque group is expected to participate in the city’s Columbus Day Parade.

History of the Eusko Etxea of New York

Euzko Etxea of New York was founded by 13 Basque men in 1913 and today is aiming to be an inclusive, modern cultural center, according to their website.

The first Basques began arriving in New York in the late 1800s. Some came to work  as ship men in New York’s busy harbors. Some came with the plan to head west on a train, but never left this cosmopolitan city. For a more in-depth history of the Basques in New York, click here.

A group of Basque men began meeting regularly at a house on Water Street in lower Manhattan in 1905 with the intention of starting an organization. Professor Emilia Doyaga investigated and reported on the early history of this group. They became official in 1913 as the Centro Vasco-Americano, and their charter was written by a young Italian-American lawyer, Fiorello La Guardia, who later became the mayor of New York. The original purpose of the organization was to serve as a mutual aid group that would help members financially when they lost their jobs, got sick or a family member died. The hard-working immigrants rarely made use of  that aid.

In 1928, the group bought a building at 48 Cherry St. for its social gatherings, referring to it as Centro Vasco. But during World War II, the government bought the buildings on Cherry Street and tore them down to build housing projects.

In the ensuing years, the group moved from one building to another, renting space for their gatherings. Eventually the tight-knit group scattered. The group went through different incarnations. A woman’s group was started because Centro Vasco-Americano was for men only, and a youth group, Juventud, was created to learn and perform the traditional dances, but they got together at different locations, disconnected from the organization, which by then was just a small group of older immigrants who gathered to play cards.

Father Jose Mari Larrañaga attempted to provide some unity during the 1960s, and the organization was revitalized. He headed up an annual Aberri Eguna (Day of the Basque Homeland) celebration, which grew bigger every year. The mass and luncheon were held at St. James’ Church and hall, located at 23 Oliver St. near the old Cherry Street neighborhood. This Aberri Eguna celebration continues today.

Finally, in 1973, the group bought a building at 307 Eckford St. in Brooklyn, New York, where they are still located today. In 1980, the group’s name was changed to Eusko-Etxea of New York. The club’s building is old, but over the years the organization has made numerous improvements and frequently rents out the second floor hall.

Today, the Basque-American members are dispersed throughout the five boroughs of the city. The club currently has over 100 members, said Azurtza, noting that several of them, including himself, are from the Basque Country. They are trying to organize more frequent events in order to attract a larger audience.

Azurtza became president of the club in January and noted that planning the celebration required lot of work this year. Recent renovations to the building have been carried out in anticipation of the centennial celebration.