Basques play significant role in Trailing of the Sheep Festival 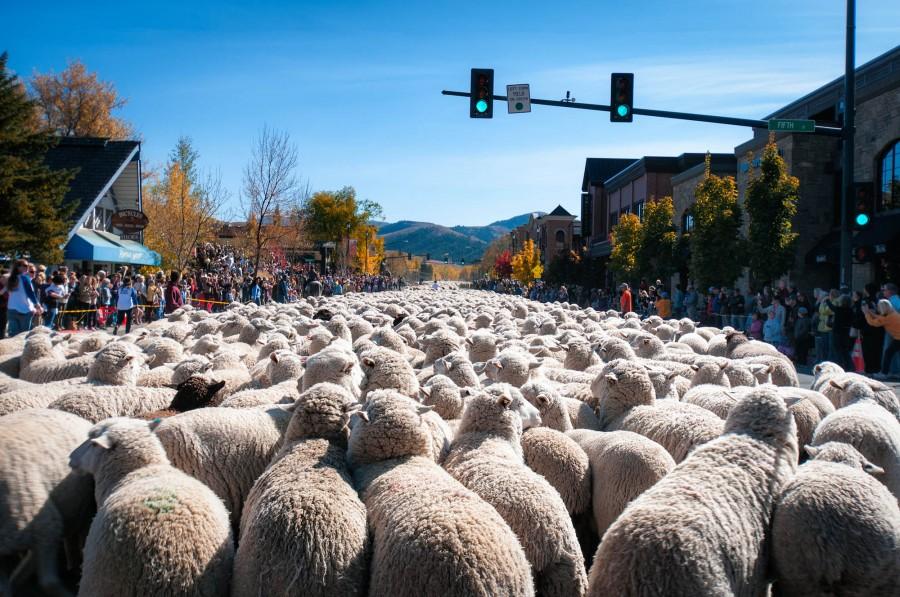 Sheep are trailed down Main Street in Ketchum during the festival.

The 18th Trailing of the Sheep Festival will honor old generations of ranchers.

The towns of Ketchum and Hailey, Idaho will host the 18th annual Trailing of the Sheep Festival Oct. 9 – 12. This event aims at honoring the men and women involved in Idaho sheep ranching “in response to the rapid loss of farms and ranches,” in the words of the organizers. Basque ranchers have been part of the landscape for decades.

The Oinkari Dancers will be part of the Folklife Fair which runs 10 a.m. to 4 p.m. Saturday and part of the Sunday sheep parade.

On the last day of the festival, the traditional sheep parade will be held: A trailing of over 1,500 sheep down Ketchum’s Main Street, as part of their annual migration to winter pastures.

“I’m very excited,” said Mary Austin Crofts, Executive Director of this festival. “It’s going to be a success. The Trailing of the Sheep Festival grew so much because it’s real. People come from all over the place because you cannot see anything like this anywhere else. This is real.”

Crofts’ words might sound excessive, but they aren’t. In fact, this unique festival, first organized in 1996, gathered around 19,000 people on previous occasions, received the Governor’s Award for Cultural Heritage, and was included in the top ten fall festivals of the world by MSN Travel.

Each year the organization celebrates a different aspect of sheep ranching, ranging from the Wonders of Wool to the Women on the West and from the Songs and Stories of Sheepherding to Sustainability. This year, the festival will celebrate the Old Generations of sheep ranchers − “They were the first ones coming to this land, and that’s why we are here,” stated Crofts. As for the next two years, they’re planning to honor the Current and the Younger Generations, respectively.

There is something for everyone in the family to enjoy at this festival: A story telling night, a folklife fair, knitting and weaving classes, activities for kids, sheepdog trials, conferences and talks, exhibitions, and photography and cooking workshops, to name a few.

Among the culinary events there is also room for vegetarians. As Crofts explained, “we want to welcome everybody. Lamb is also wool, not just the meat. We usually have one or two vegetarian classes but this year we have five. It’s very popular.”

In spite of the fact that nowadays there are not as many Basque sheepherders as there used to be some 50 years ago, Basques have always had a place in this kind of festival. Basque culture “has left an indelible imprint on the West,” reads the festival’s website. With that in mind, Kent and Cathy McAdoo will give a photograph-illustrated talk about their experience of living, for 13 months, with Basque herders in the early 1970s.

Talks and conferences are part of the festival because it is also about “educating people,” declared Crofts. “When people understand each other, they are more tolerant. Without understanding there is always conflict, no compassion.”

In springtime, flocks migrate north from southern Idaho to higher fields, through Bellevue, Hailey, Ketchum, Galena, and the Sawtooth Mountains. And in fall, the sheepherders retrace this trail, southbound, to the desert. It is then when the Trailing of the Sheep Festival is celebrated.