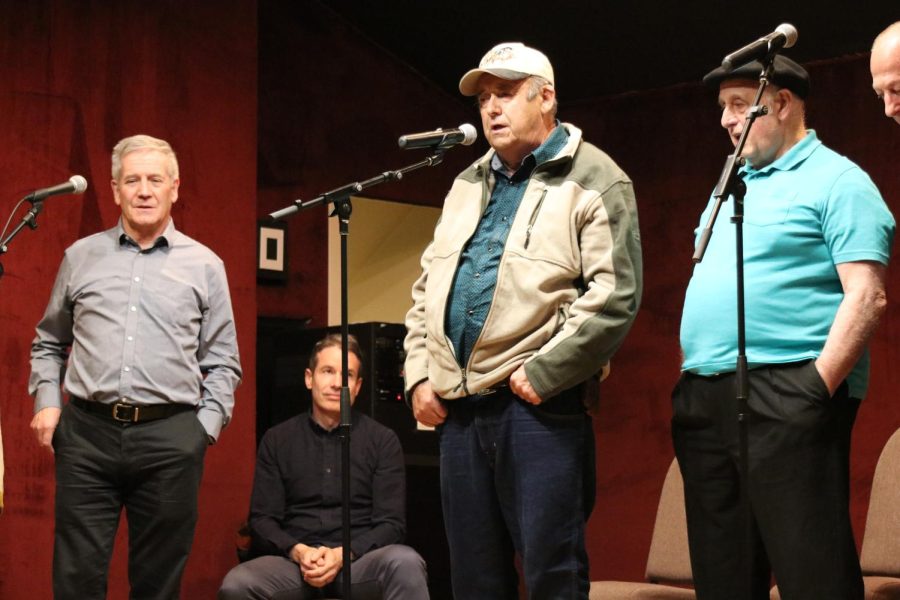 The five Basque poet-singers, who stood before the crowd at the bertsolari celebration in South San Francisco, were asked to impersonate different characters including a car salesman, restaurant critic and jai alai player.

Judging by the approval of the audience, the bertsolaris’ efforts to spontaneously come up with rhyming verses in Euskara were clearly successful. You could call it “Basque performance art.”

Listeners clapped and chuckled throughout the Bertsolari Special Tribute March 12. The celebration of five U.S. bertsolaris– including two champions from the Basque Country– attracted a crowd of about 125 people to the Basque Cultural Center.

The five honored men were Johnny Curutchet, Martin Goicoechea, Jesus Goñi, Jesus Arriada and Gratien Alfaro, who have performed bertsos at numerous Basque events in the U.S. over the years. They received glass microphone mementos from Philippe Acheritogaray, president of the North American Basque Organizations, which sponsored the event.  Arriada and Alfaro did not perform, both having retired from singing.

Bertsolaris Sebastian Lizaso and Aitor Mendiluze traveled from the Basque Country to participate. Both have been champions there where the art of bertsolaritza is supported in the form of regional competitions.

Author and scholar Joxe Mallea-Olaetxe, who introduced the U.S. bertsolaris, joked that several of them had passed through the “San Francisco school” of bertsolaritza. Most started performing in the Basque Country before they immigrated to the U.S. The art of bertsolaritza — creating impromptu verses on the spot when given a topic — has gained popularity over the years, particularly in the Basque Country, where every four years a championship is held that attracts up to 15,000 people.

The crowd at the Basque Cultural Center leaned toward the older side, with most being immigrants from the Basque Country, since listeners needed to be Euskara speakers for full enjoyment of the performance. Although when Mallea asked the audience if anyone was interested in being a bertsolari, one youngster piped up with his answer: “I do,” which elicited some chuckles.

Todd Azurtza of Boise gave the bertsolaris a wide range of topics, with everything from immigrating to the U.S. and obtaining the American Dream to selling a car and reviewing a restaurant. The bertsolaris made jokes and heartfelt comments about their topics.

“We did our best with our sport, but we no longer have opportunities,” sang Lizaso, representing a jai alai player in the U.S. “However, we shouldn’t leave the country. Frontons are closed, but dreams are still open.”

A translation team, Valerie Arrechea, Xabier Berrueta and Basque Country bertsolari Xabi Paya, typed quickly as the poets sang to provide English translation of the verses on a big screen, so those who didn’t speak Basque could follow along.

After the presentation, accordionist Mercedes Mendive of Elko, Nev. entertained the crowd while they ate dinner.

Because of the pandemic, the event was postponed from its original date set for 2020, which was the 10-year anniversary of a similar tribute. Acheritogaray shared the fact that San Francisco Basque Club has a historical link to bertsolaritza. Two bertsolaris from the Basque Country, Xalbador and Mattin, toured the U.S. Basque communities in 1960. They were performing at a French gardeners’ festival in the Bay Area when their microphone was cut. Some Basques got angry and that very same evening at a restaurant in San Francisco decided to create their own club. The photos of these two well-known bertsolaris hang at the Basque Cultural Center in remembrance.