The Oinkari dancers have perhaps done more than any Basque-American group to promote Basque culture in the United States. 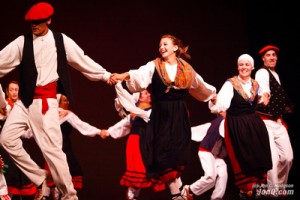 For 50 years, the Oinkaris have been dancing at festivals and world fairs, even the Capitol building in Washington DC, building goodwill and attracting attention with their twirls and jumps in their traditional white, red and black costumes.

Jaialdi 2010 was the perfect occasion to celebrate their 50th anniversary. On July 28, 140 of them gathered in front of the Basque Museum boarding house to enjoy a brunch together and talk about old times. 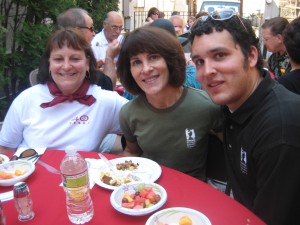 Robbie Jausoro Gary remembers dancing at the New York World’s Fair and in the Capital Rotunda in 1964, when she was only 14. “We started raising money a year in advance,” she said. In fact, yesterday’s reunion included an attempt to recreate a photograph of the entire group that traveled east on that trip. Nearly 30 members of that group gathered for the photograph.

“We loved it,” said Debbie Navarro Smith. “We got to travel and meet a lot of different people. It was a lot of fun.”

Several Oinkaris went on to lead other
dance groups, like Delphina Urresti, who started a group in Salt Lake City, Utah, and John Ysursa, who directs the Chino group.

“Oinkaris have roots in other groups all over the west,” said James Sangroniz, who learned to dance in Salt Lake City, but then joined Oinkaris when he got a job in Boise.

Al Erquiaga, one of the founding members who organized the party, said they had a mailing list of about 800 ex-Oinkaris and many more wanted to come, but they could only fit so many on the museum lawn. The party included young and old.

“Our kids have been in Oinkaris and now our grandkids are in it,” said Toni Achabal, whose grandson Robert Norton recently began dancing in the group.

The group began in 1960, after seven Boise Basques traveled to the Basque Country and were taken under the wing of a young dance group in San Sebastian named Oinkari. When they left, the dancers asked them to start a dance group in the U.S. and name it after them. The Boise youth were enthusiastic, but they became serious when they received an invitation to dance at the 1962 World’s Fair in Spokane, Wash. 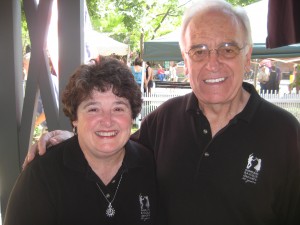 Some of the early Oinkaris, like Juliana Jausoro Aldape and Al Erquiaga, at the reunion.

The reputation of the group grew with the years, as did Idaho press’ love affair with the dancers. Photographs of the Oinkaris were splashed across newspaper pages almost every time they danced at a public event. Idaho learned of the Basques through their dancers.

Today, many former Oinkaris are part of the strong Boise Basque community and they are a close knit group.

“All my best friends are from Oinkari,” said Ana Overgaard, who drove 1 ½ hours back and forth from Weiser every Sunday through four years of high school to be an Oinkari. She danced several times during the Jaialdi festival.

“It’s different from the younger kids’ group,” said Mikel Sangroniz, 15, who was at the reunion with his father, James Sangroniz, an ex-Oinkari. “You have to work a lot harder and you have a reputation to live up to.” 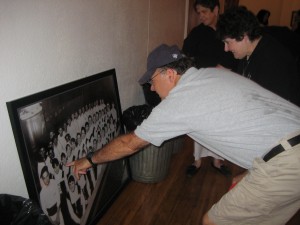 Ex-Oinkaris remember their trip to New York in 1964. 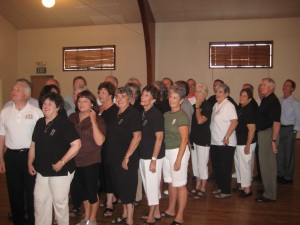 Ex-Oinkaris try to recreate the group photo of the 1964 New York trip.

The Oinkari dancers perform at the Idaho Expo.