The venerable Oinkari Basque Dancers are hoping to re-unite current and former members for a special performance during the huge Jaialdi 2010 international Basque festival in Boise next July. 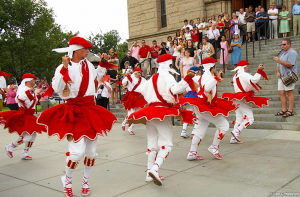 The performance, likely to be the biggest gathering of Basque dancers ever in the U.S. for a single show, is expected to take place Saturday afternoon on July 31 at the sprawling Expo Idaho center, the main venue for the festival, said Al Erquiaga, one of the group’s founders.

“We’re trying to get as many of the Oinkari dancers here as we can,” Erquiaga told Euskal Kazeta in a recent interview.

(Updated information: Erquiada said the reunion has been canceled due to all the activities — some at the same time — during the huge Jaialdi festival. “There’s just too much going on,” he said.)

He said the group has about 740 alumni — all of whom are invited to participate in the unprecedented gathering. “We’re looking forward to performing,” Erquiaga added.

The Jaialdi festival will be held from July 28 to Aug. 1, 2010. About 25,000 festival-goers from Basque communities in the United States, Latin America and the Basque Country are expected to descend on Boise for the week-long celebration of all things Basque. Festival organizers have created a Twitter account, Facebook page and web site for the event. (For links to festival venues, restaurants, hotels and information on group rates, check out Euskal Kazeta’s interactive Jaialdi map.)

December 2010 will mark the 50th anniversary of the Oinkari Dancers’ first performance, which was at the annual Sheepherder’s Ball. Since then, numerous performances by the group have helped spread awareness about Basque dancing across the United States. The group has danced at the World Fair in New York in 1964 and in Spokane, Washington, in 1974. Members also participated in a prestigious folk dancing event at the Kennedy Center for the Performing Arts in Washington D.C. in 2004 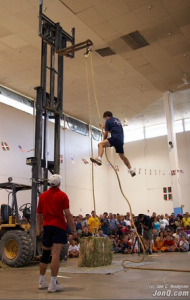 The public attention and interest in Basque dancing that Oinkari helped spark also has spread to other Basque communities across the West. Alumni who moved elsewhere have become involved with Basque dance groups at their local clubs.

The seed for the group was planted during the summer of 1960, when Erquiaga and several others from Boise visited the Basque Country. While in San Sebastian, they met members from that city’s Oinkari dance group, who taught the Boise visitors a number of dances and took them to festivals, Erquiaga recalled.

As Erquiaga and the others prepared to return to the U.S., the San Sebastian dancers made a request to their Boise friends: “The best you thing you can do is go home, start a dance group and call it Oinkari,” Erquiaga recounted. “And that’s what we did.”

He said the group held an event in July to kick off the year-long celebration of its 50th anniversary. The party, attended by about 260 people, was at Boise’s Falcon Crest Golf Club, whose owner and wife danced with the group.

Oinkari alumni interested in dancing in the Jaialdi performance can check out the alumni section on the group’s web page. Interested former dancers can also e-mail Erquiaga at averquiaga@hotmail.com.

See the new blog about the Oinkari Dancers by EITB News.