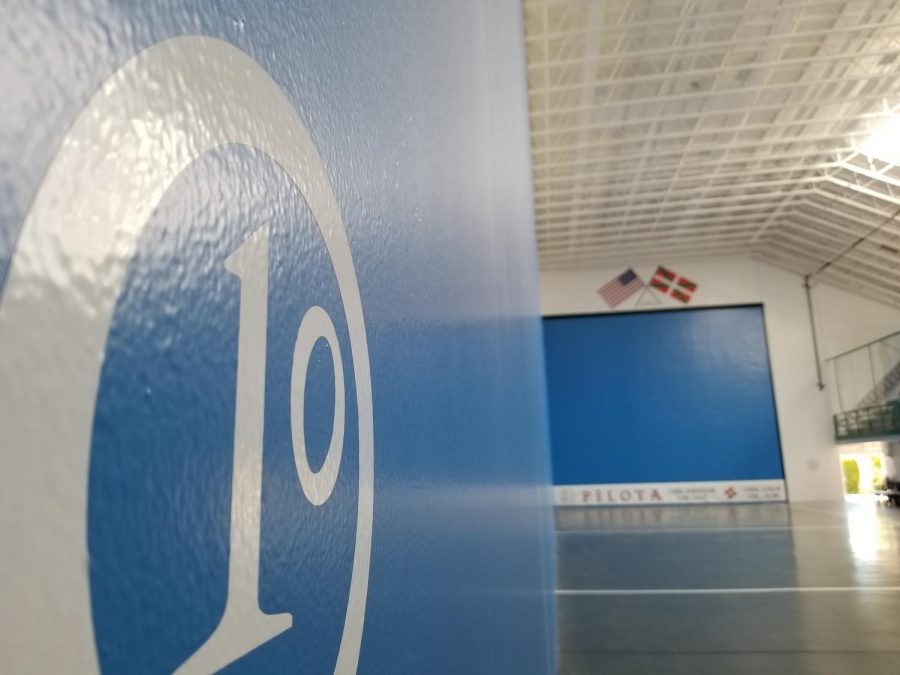 Xabier Berrueta remembers where he was when he got his brother’s text last October. He was in the town of Oloron-Sainte-Marie, France, watching the World Cup championship of Trinquet. His brother Aitor told him the board of the Basque Cultural Center (BCC) in South San Francisco had given approval to paint the kantxa, or the pelota court.

Berrueta, president of the United States Federation of Pelota, was inspired. The pelota aficionado is always looking for opportunities to promote the different forms of the fast-paced sport.

If Oloron, a small town of 11,000 in the Bearn region, can host a world cup of pelota, why can’t the San Francisco community host an international pelota tournament?, Berrueta recalls thinking.

Berrueta later asked Roberto Elias, architect for the Federación Internacional de Pelota Vasca, to assess the Basque Cultural Center’s court to see if it was qualified to host a world cup event. Elias visited the center in February during its annual anniversary celebration and his report was promising. One of his primary suggestions was that the court be painted forest green or blue, a current requirement for international tournaments.

The left-wall court was painted a shade of electric blue in late June and July. Photos of the newly painted court were posted on the center’s Facebook page, prompting many positive comments from the members.

“It’s wow. It’s bold,” says Tony Huarte, a veteran of international pilota competitions and pilota chairperson for the North American Basque Organizations. He is also a member of the BCC board.

The blue is a big change from the beige color of the last few years. This is only the third time the court has been painted since it was built in 1982.

Huarte, who has played handball in numerous championships in Europe, Latin America and the United States over the years, has experience with courts painted forest-green. That is the color of most courts in the Basque Country, he noted. The frequent cloudy weather in South San Francisco affects the light that comes in through the windows, he explained, and the dark green color, even with the lights on, would be too dark for the BCC court. So the BCC board opted for the lighter blue.

Several other requirements would be necessary to qualify the court for an international event. The fault line at the front of the court was moved a few centimeters during the painting, Berrueta said. Other changes are likely to happen bit by bit. Hosting a world cup is only conceptual right now, he noted.

Huarte expressed enthusiasm for one day hosting an international tournament.

“I think people would like to come to San Francisco to play,” Huarte said. Perhaps a smaller event, such as an under-22 championship, could work for them.

Basque Pelota Dates Back to the Gold Rush Days

The court is currently closed, due to the current state and county coronavirus regulations that prohibit the opening of indoor sport facilities. The BCC board took advantage of the inactivity at the center to complete the painting and also do some remodeling, changing the carpeting in the lobby and meeting room to tile. Usually, because the building is so busy with restaurant patrons, handball practice, celebrations and other activities, repairs have to be squeezed in.

The court at the Basque Cultural Center is the only operating indoor pilota court in California. Several versions of pilota can be played there, including handball, paleta cuero, pala corta, paleta goma, and 36-meter cesta punta, said Berrueta, one of the foremost authorities on pelota in the U.S.

Two small international events have been held at the center, noted Berrueta. The first was the Mini-Mundial of Pilota Mano in 1983, in which six players from six countries squared off on the kantxa. In 2007, the World Pilota Council held an international championship at the BCC court. Athletes from seven countries battled it out in heated competition. Teams came from the Basque Country, Mexico, Argentina, Bolivia, Chile, Venezuela, in addition to the United States, which was represented by players from the Basque Cultural Center.