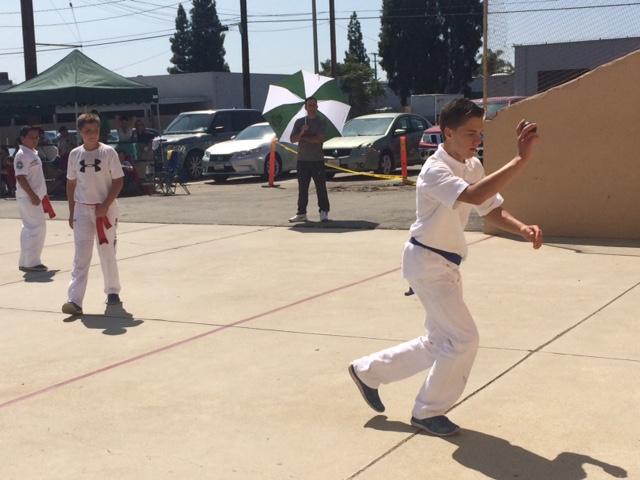 The Centro Basco restaurant in Chino, Calif. celebrated its 75th anniversary with a festive party that attracted several hundred people.

Youth from Chino and Bakersfield smacked the ball in the afternoon heat at the Centro Basco’s historic handball court, as part of the Sept. 5 celebration. Handball games continued into the evening with adult players from San Francisco, Chino and Mexico. In the evening, a Basque Country band, Holako, played for a big dancing crowd. The party on Saturday preceded the traditional annual Chino Basque Festival on Sunday.

For many years, the Basque restaurant was also a boardinghouse for young men from the Basque Country who worked in the local dairies and as sheepherders. It has been a cornerstone of the Chino Basque community and continues to serve its food family style, including soup, and platters of salad and other side dishes to share, which developed from the boardinghouse-style meals.

Centro Basco, at 13432 Central Ave., returned to old-day celebrations for its anniversary. The restaurant put up a big tarp and most of the anniversary celebrants ate outside. People recalled parties many years ago, before the Chino Basque picnic started, when the restaurant hosted similar big outdoor dinners under a grape arbor that grew over the cemented lot between the restaurant and the small motel next door. Many wedding and birthday celebrations have taken place at the restaurant over the years. During the party, diners viewed slides of many guests and parties through the years.

On Sunday, the Basque festival moves to the fairgrounds on Central and Edison Avenues, with activities all day long. But on Labor Day Monday, the party returns to Centro Basco, where the restaurant serves a popular Basque breakfast of lukinka, bacon, fried eggs and french fries. More handball games are likely. The breakfast tradition started to send out-of-town festival-goers on their way.