Irati Forest, Izpegi Pass, and the Stag Beetle in the Ferns 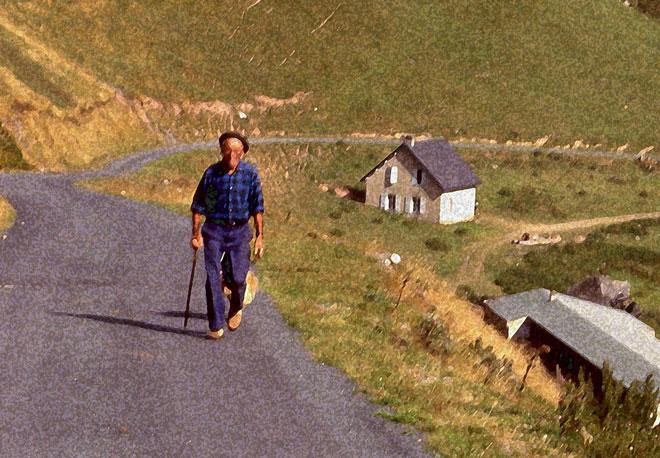 I was almost 9 years old. We were flying on Air France flight 669 to France. When I say “we,” I mean my parents and my 10-year-old brother Philippe.

My brother and I were boys to the max.  Let’s just say my mother had her hands full.  She often called out to us repeatedly “Philippe et Pierre, Philippe et Pierre!”  If it wasn’t one, it was the other.  We were always cooking up an adventure or some scheme to break up the boredom of life.  Add to the recipe a trip to the Basque Country in the southwest of France where my family originated and that would spell… unforgettable memories.  If you can’t imagine what lies ahead, let me paint you a picture. 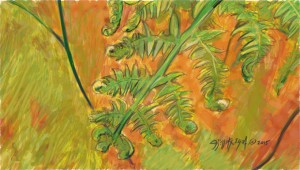 I’m convinced that boys of our age should be kept busy – a way to stay out of trouble.  However a trip to the “old country” does not make for an itinerary that suits two disinterested boys hungry for adventure.  A typical day on our vacation, in the town of Baigorry, often consisted of at least two or more trips to visit unknown family members or to the houses of family friends.  The houses were mostly farms located far from what we considered civilization.  Far from excitement.  To boot, there were no children to play with.  Our family would head out in the morning, often visiting several farmhouses during the day.

On one particular day we visited the farmhouse homestead of my mother’s childhood friend.  Once you passed the collective smells of the front of the house – a concoction of chicken and cow manure – we were invited into a house fragrant with cured ham, salt and the often too familiar country mildew.  The adults sat and talked, my brother and I mostly tried to listen, with an elderly women and her nearly-fifty-year-old unmarried son.  We were confined to a dark dining area, watching the indoor flies make constant circles in the middle of the room while the rest of the fly family members looked for a way out of this hell hole, bouncing off the window glass.  They too wanted out!  We endured this for no more than an hour until we managed to create a diversion.  What usually worked was to ask “to use the bathroom” or to simply let your body fall limp as it slipped uncontrollably under the table.  I then motioned to my brother that there was an escape route out of this prison on earth.

We broke outside to freedom through the door we had entered or through the large double-barn-doors right off the foyer or main entrance of the etxea (house). Once free, my brother and I scanned the horizon, taking in the air of “liberté,” understanding the French saying “…Egalité, Fraternité.”  My brother noticed something up ahead, to the right of the pathway.  Nestled together were five tree trunks with the largest and tallest one in the middle.  As the ring leader, my older brother made a motion pointing to the wood pile.  I quickly followed.  As we approached we saw freshly chopped wood – normal enough.  However there were unidentified objects on top of the large stumps.  Upon  closer examination and to our surprise, we discovered they were ducks of all varieties and colors, peacefully sleeping atop the tree trunks.  To our astonishment, they did not flinch or get startled as my brother got closer and closer.  I even took to talking like Donald Duck – one of my many impersonations – thinking that the fowl would wonder, “what have these American boys brought with them from the U.S.?”

Now my brother and I were peering over the ducks.  They weren’t sleeping.  They were dead, the product of a recent hunting trip.

So what does one do with a dead duck?  Well, you butcher it of course.  How convenient for us there was an ax on top of the wood pile.  My brother went for the ax and just as fast, took to working on what appeared to be a Mallard duck.  He quickly severed the head, a good first step.  But what followed was a butchery of that beautiful bird.  It lay there mutilated.  My brother looked over at me for approval.  I shook my head in disgust. 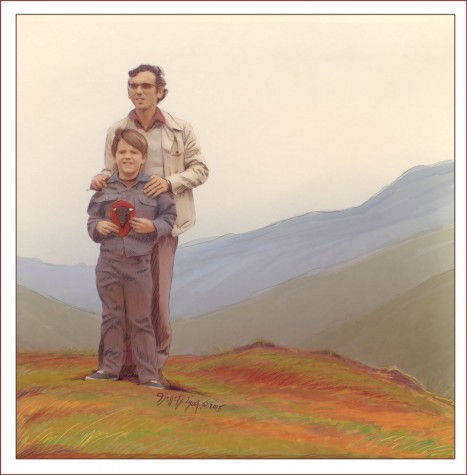 On another day, my aunt’s husband, my uncle, Otto Philippe,  offered to take us for a day trip to visit the local forest.  culminating with climbing a large mountain pass toward Spain.  Otto Philippe (not to be confused with my brother) was smart-looking man who wore nearly frameless eyeglasses.  I thought he had a large head for his skinny neck and body which convinced me that his cranium must contain much intelligence.  He was almost alien-like in appearance, save for his dark hair and matching 5-o’clock shadow.  Otto had been raised by his great-aunt after his Spanish-Basque mother left him with her to care for him.  He never knew his father.  After a short time with him and contrary to his appearance, I knew he was not sent to earth to report back to the mothership.  He was a witty well-balanced person, who had been blessed with a great upbringing.  In addition to that, he understood what it was like to be a boy who longed for an excursion, albeit a Basque one.

My brother and I got into Otto’s four-door Citröen.  As the car followed the winding roads, we watched Eskual Herria pass framed by the car’s dashboard and windows.  Our first stop was the Forêt d’Iraty.

The smell of ferns permeated the forest air. A varied-green-colored vegetation that resembles tall shag carpet was scattered from pine tree to random oak tree, providing a thick tapestry across the amber and rusted decomposed forest floor. Deep greens were dimly lit except for the periodic ray of sunlight that made its way past the canopy overhead.

What fun it was to explore the forest.  It was the first time I had encountered ferns.  Their smell, at times woodsy, tickled my senses as they were velvety to the touch.  I loved to get close to them, examining the way they grew.  The branches unfurled like a New Year’s Eve party favor starting off as pale green balls called fronds covered by rust-colored fur.  They would unravel into these large configurations of small leaves shedding their rusty hair.  There was something mathematical about the placement of their leaves, how they were arranged.  Little did I know at the time I was experiencing geometry in its natural form.  If I didn’t know better, I would have sworn ferns were from another planet! As I learned later, Ferns have existed on our planet for over 360 million years.

We stopped at a restaurant for a quick bite to eat which means at least an hour and a half.  Afterwards, we quickly took to the forest to explore more of what it had to offer.

Before leaving the forest cathedral, I happened upon a large insect that I never had seen except for in natural history books.  It was a stag beetle.  It was larger than my 9-year-old palm measuring about 5 inches long.  This dark-brown insect featured these large pincher-like claws that grew out of its head.  The male sported the largest claws and they seemed almost too large for its body size.  They were articulated, moving side-to-side with special hooks on the end, able to pick up other insects or to duel with their opponents.  I was utterly fascinated.  I decided at that moment I would take it with me — at least back to show my parents and whoever was interested in meeting it.  Stag beetles aren’t particularly fast and so catching one was easy.  You just have to manage to keep clear of the one-inch claws.  Otto Philippe allowed me to place this new pet in a paper cup.  The cup was equipped with holes that would provide the proper ventilation.

We finished our day trip with a drive and short climb to Col d’Ispéguy.  What’s a trip to the summit near the French-Spanish border without a stop at the “venta” or border-store?  Here people buy duty-free products that you would only find deep in Nafarroa, Bizkaia, Gipuzkoa or Alaba.  Let’s not forget the commemorative purchases for youngsters.  Our uncle bought us each a souvenir bull’s head mounted on a red-velvet covered plaque.  Before you jump to conclusions, these were 1/20th-scale toros’ heads, small enough to hold in one hand! 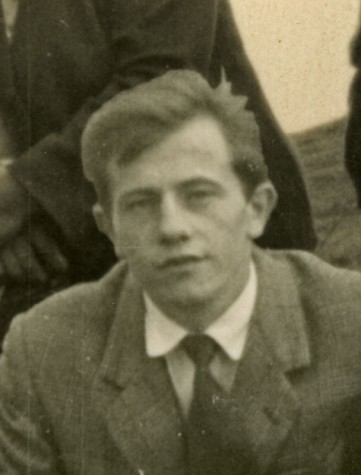 I couldn’t help but feel that Otto was filling in for another uncle, my mother’s brother, Otto Jean-Charles.  Tragically the year before, Otto Jean-Charles had lost his life in a car accident.  Jean-Charles was an adventurous young man.  He and his older brother André were known for their own escapades in Saint-Étienne-de-Baïgorry.  When Otto Jean-Charles passed away, he left behind a beautiful wife and three equally lovely girls.  The loss his family — his wife, his children, my grandparents, my mother, her siblings – felt and feel today was not lost on me.  I had known him when I was younger and missed the times I could have shared with him.  I felt that during that day’s trip, Otto Jean-Charles was strangely with the three of us – Otto Philippe, my brother and me.  Catching the stag beetle was a connection of sorts to my uncle Otto Jean-Charles who I was told enjoyed insects too.  I imagined that Otto Jean-Charles would have celebrated this adventurous day.  Who knows – he might have been the first to see and want to collect this beautiful insect.

This past summer I spoke to Otto Jean-Charles’ widow Josie at her daughter Laurence’s 50th birthday party in Sarlat, France.  Ttantta Josie remembered the two rambunctious American boys that visited that summer in 1972 and how I had caught the stag beetle.  She reminded me (as I remembered too well) that “boys will be boys.” I had tormented her daughters as well as other girl and boy cousins, using the stag beetle to terrorize them.  It was all in good fun she recalled.  I agreed.

As the birthday party continued through the evening I found myself thinking of Otto Jean-Charles, missing him.  I wondered how things might have been if he had not lost his life 44 years earlier.  I listened to the band — the lively trumpet player, the light and happy tone of the drummer’s voice, and the warm touch the accordionist brought to the gathering of friends and family.   I listened to Otto André sing “Boga Boga” in his beautiful-tenor voice and imagined his younger brother Otto Jean-Charles singing alongside him.  As I looked above to the star-lit sky, I wondered still if he wasn’t there somehow among us.

During a short musical break, Laurence’s theater friends livened up the party with a little entertainment of their own.  Laurence enjoyed the theatrical sketches.  Partygoers participated in games and a live auction.  To my surprise, and yet not too much, the person at the microphone was distracted by something that fell from the sky.  It had been attracted by the light emanating from the party.  It flew past the band stand and landed on the dance floor.  It was a dark-brown object that looked like a bat flying at night.  The person on the microphone announced to everyone “oh we have a visitor from afar.”  He stepped off the band stand with the cordless microphone still in his hand he bent down to retrieve the unidentified flying object (UFO?).  As he raised it in the air to show everyone, it moved in between his fingers. 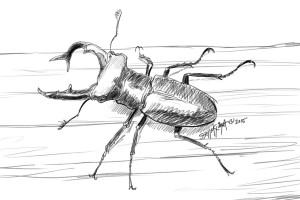 He announced to all, “I don’t know what this is but it should be released to return to where it came from!”  He walked past the party lights, beyond the partygoers under tents and released the creature in a dark field.

It was not a bat that I saw.  It was no UFO nor stranger to the party.  It was a special stag beetle that had returned to check on His family.