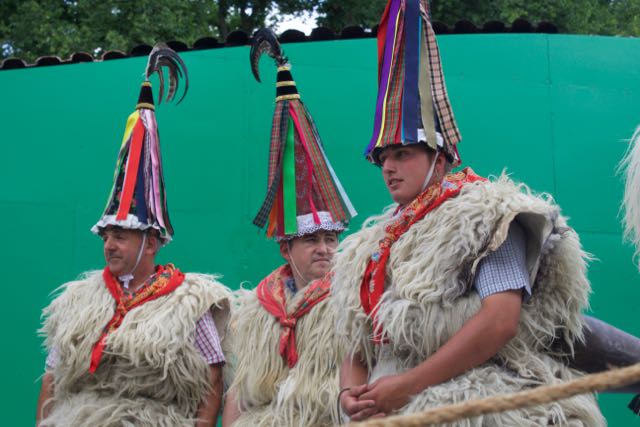 The Joaldunak of Ituren present their tradition at the Smithsonian Folklife Festival.

Among the unique groups participating in 2016 Smithsonian Folklife Festival in Washington D.C. are the Iturengo Joaldunak — essentially, the bell wearers of Ituren, a small town in Nafarroa. They made quite a scene as they marched down the National Mall wearing thick sheepskins and tall colorful hats, clanging the large cowbells tied to their backs.

This tradition is so old that members of the group say they don’t know when it started.

“In the olden times, it served to scare away the bad spirits and the witches,” said Jose Martin Bereau. Legend also has it that they also would join the sheep at the end of the summer, when they were brought down from the mountains, to scare away the wolves.

The men traditionally march on the two days after the last Sunday of January. Two adjoining towns, Ituren and Zubieta, in the province of Navarra, share the tradition, and on the Monday the group from Zubieta marches to Ituren, joined along the way by the Ituren group, and the following day, the Ituren group marches to Zubieta. The Joaldunak, who can number up to 60 people, are announcing the arrival of Pre-Lenten celebration of Carnaval.

The Joalduna characters have become so popular that many Basque towns now ask them to participate in their town festivals.

Javier Bereau, director of the group, began wearing the bells when he was 4 and now he is 63. Many of the other members also started the tradition when they were very young. “They live for this,” said emcee Unai Nafarrete during a festival presentation.

On June 30, at the Smithsonian Festival, the group gave a demonstration of the elaborate process of putting on the costume, which includes an decorative lady’s slip and a tall hat with colorful ribbons, “just for fun.” The cowbells are tied on with a heavy rope, to keep them at the right height on their lower back, so that they clang loudly as they march. Bureau grimaced and gave out a yell and a laugh as his comrades pulled the rope tight over his sheepskin costume.

The Joaldunak also carry horses’ tails, each with a handle that is decorated specifically for the owner. The horses’ tail is supposed to help keep the land fertile. They swing them as they march, to help the Joaldunak keep time.

The bells weigh over 30 pounds and are specially ordered from the French town of Nay.

The tradition has always been carried out by men, but women are starting to join in, they said, and they don’t change any of the requirements for the women. Most of the participants learned the march by watching their parents and grandparents do it.

Several members of the group said it was their first time in the United States and they were thoroughly enjoying the festival. With so many Basques and familiar cultural traditions around them, “we feel like we’re at home,” said Jose Martin Bereau.