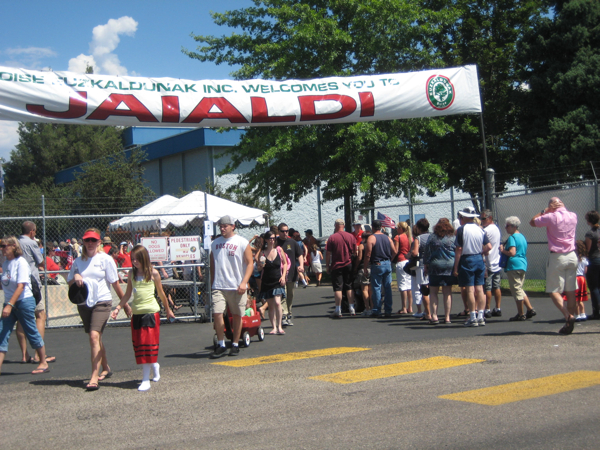 Jaialdi is held every 5 years in Boise. Photo: Euskal Kazeta

Organizers for the Jaialdi 2015 festival recently selected musical groups from the Basque Country to perform at the massive international cultural event in Boise next year.

The festival, scheduled to run from July 28 to Aug. 2, 2015, is held every five years in Boise and typically attracts thousands of people who partake in an extravaganza of all things Basque.

Officials at Boise State University’s Basque Studies Program have also made preliminary plans for their 2015 Jaialdi Symposium, which precedes the festival with academic presentations.

Festival organizers have announced the four international groups that will perform at Jaialdi, each of them selected to provide festival-goers with a unique opportunity to experience different aspects of Basque culture. The groups are  Luhartz, a popular band from Durango in Bizkaia; ” Ortzadar, a dance group that hails from Pamplona in Navarra; The Crazy Wheels Band from Soraluze in Gipuzkoa; and Irrintzi Erraldoi Konpartsa Kultur Elkartea, a gallery of giants from Orio in Gipuzkoa.

Vendors and others interesting in selling items at Jaialdi can submit applications online at the Jaialdi 2015 website. Event organizers have also created a Jaialdi 2015 Facebook page.

The Jaialdi 2015 Symposium is scheduled to run for two days at the Boise State campus beginning on Monday July 27. The proposed theme is  “Joan-Etorri,” or Going forth and coming back, organizers say.

Symposium organizers point out that 2015 will mark the 40th anniversary of two key events in the U.S. Basque community: The start of the Boise State Basque Studies Abroad program and the publication of the ground-breaking book Amerikanuak by William A. Douglass and Jon Bilbao.

Organizers say the two events provide a launching point for topics such as Basque identity and immigration and also underscore “the back and forth of the Basque experience.”