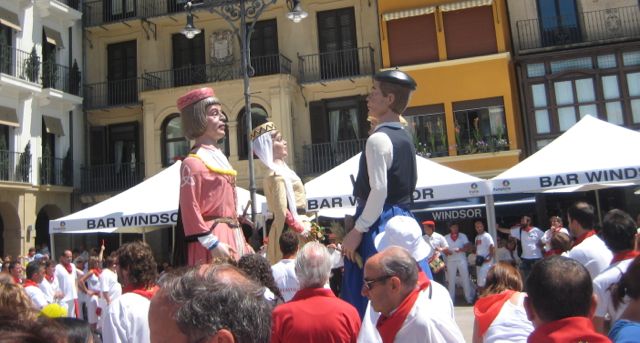 Gigantes and cabezudos — Giants and Big-Heads — are a common sight at festivals in Spain — and Boise’s Jaialdi will have its first Giants during this year’s festivities.

“We’ve never had them before,” said Amy Hormaechea Wray, one of the co-chairs of Jaialdi 2015. This big festival, which comes only once every five years, is the U.S.’ biggest celebration of all things Basque. The festival runs from Tuesday, July 28 to Sunday, August 2.

The days will be filled with exhibitions of Basque athletic and cultural traditions such as folk dancing, wood chopping and weight-lifting. The weekday events take place on the Basque block, the 600 block of Grove Street, while the busier weekend festival days move to Expo Idaho, the former fairgrounds. A big sporting event takes place Thursday night at the Century Link Arena, and on Friday night, Basque music and dance performances are highlighted at a Festa’ra show at the Morrison Center. See more schedule details here. The businesses on the Basque block, such as the Basque Museum, Bar Gernika, Leku Ona restaurant, the Basque Market and the Basque Center will all be hosting events and adding to the festivities.

While many activities are similar to the 2010 festival, the international performers are new. The colorful and mythical giant figures with heads made of paper mache (Irrintzi Erraldoi Konpartsa), will have scheduled performances but they will also roam the festival. The other performers include Luhartz, a band that has played frequently at California festivals, as well as the Basque rock band Crazy Wheels Band, and Ortzadar, a dance group from Pamplona, Nafarroa. Amuma Says No, the popular Boise band that plays Basque, country and rock music, will be making appearances throughout the week.

Some of the food favorites scheduled to be for sale include croketas (a breaded cream-and-meat-filled appetizer), solomo (marinated pork loin) sandwiches and kalimotxos (coke and wine),.

If you haven’t attended before, the time to start planning your visit is now. Hotels are already starting to fill up, said Wray. The Jaialdi website offers suggestions for local hotels. The websiteJaialdi.com already has lots of information about the festival and is being updated as the event gets closer.

Organizers are expecting the biggest crowd yet for this year’s Jaialdi.

“There’s been a lot of buzz about it,” said Wray. She notes that they don’t have a very accurate figure of last festival’s attendance — about 30,000 to 40,000 people. But the figures are “fairly anecdotal,” said Wray. They have put some methods in place to hopefully get a more precise figure this year.

Four co-chairs are in charge of the huge event. In addition to Wray, the organization of the festival is led by Jeremy Malone, Ana Mendiola and Rod Wray. Malone was very involved in the last two Jaialdis, so they are counting on him to see the big picture, said Wray. Wray was the president of the local Basque organization, Euzkaldunak, during the last Jaialdi.

The organizers have focused on corporate sponsorships this year and as a result, Jaialdi is being supported financially by several corporations this time, “and that’s been really nice,” said Wray.

The group Luhartz at the Bakersfield festival in 2010.