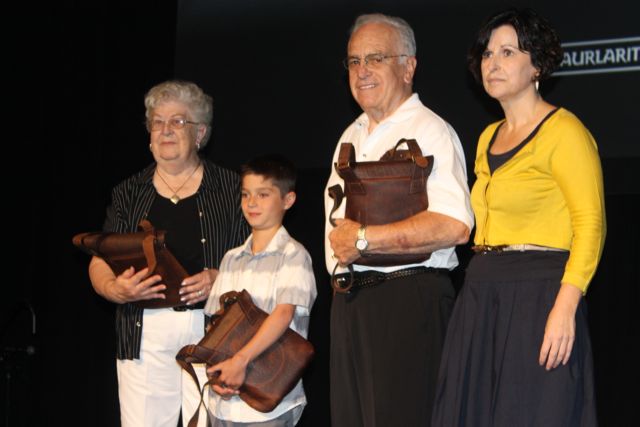 The regional Basque government in Spain honored the many volunteers who have put on the Jaialdi festivals over the years and Professor Emeritus William Douglass Friday, July 31, during a special reception at Jaialdi 2015. Basque Lehendakari Iñigo Urkullu was present for the ceremony, as were other Basque dignitaries.

“Nowadays, being Basque is in fashion in the American West,” said Maria Elorza, Basque Secretary General of Foreign Affairs. “Jaialdi is proof of this. It’s gaining popularity and a reputation around the world. Jaialdi has become an international event and it’s the biggest Basque event outside the homeland.” Hundreds of people deserve to be acknowledged for their effort, she noted.

Al Erquiaga and Gerri Achurra, who were the original organizers of the first Jaialdi in 1987, were chosen to represent the hundreds of volunteers who have been behind Jaialdi, through the years, along with Giazka Malone, 11, to represent the new generation. Emcee Jill Aldape noted that the volunteers have spent hundreds of hours “rolling croquetas, setting up tables and chairs, practicing music, teaching dance, hanging flags, coordinating millions of details of logistics.” at the recognition ceremony.

Erquiaga related the story of how Jaialdi was born, noting that he was riding in a car with the late Basque Govt. official Jokin Intxausti, who asked him what would be one big thing he would like to do, and Erquiaga responded “I have always thought it would be great to have a big Basque festival.” Intxausti pushed him to go for it.

“Whoa,” responded Erquiaga. And the idea for Jaialdi was born. Achurra recalled that the fire marshall told them that if he inspected the site of the first Jaialdi, at the old penitentiary, that he’d have to close it down, because of the large number of people who showed up, but he walked away and allowed them to hold their festival.

What’s Planned for Jaialdi 2015
The Basque government also honored Prof. Douglass, who spearheaded the founding of the Center for Basque Studies at University of Nevada Reno.

“I was asked to say a few words, but I really don’t have any,” said Douglass, to laughter. “This was a complete surprise to me.” Douglass has studied the Basques since 1963 and published many books on the Basques, including the seminal book “Amerikanuak,” about the immigration of Basques to North and South America.

“We have come to recognize that you have earned the respect of the society that has become your home,” said President Urkullo, to the crowd in English, although he also spoke in Euskera and Spanish. “You have obtained this respect without giving up your Basque heritage. Basques from near and far have met in Boise to celebrate our identity and our culture. He continued later in Spanish “We have survived difficult periods in our long history. We are surrounded by cultures and languages much stronger than ours. We are a small country. But we have something few other cultures have: pride of belonging and and a blind faith in democracy, social justice and peace…Our objective is to survive as a people, as a developed and peaceful country.

The reception, held at the Grove Hotel in downtown Boise, included videos of the honorees, as well as a video of Euskadi, which impressed the large crowd that included many Basque-Americans and groups visiting from the Basque Country. The delegates from the North American Basque Organizations, who were meeting during the festivities, were also at the reception and gathered for a photo with Urkullu at the end.

Lehendakari Urkullu also invited Basque-Americans to attend the IV Basque Congress of Basque Communities Oct. 7 – 9 in Vitoria-Gasteiz. During the week he was in Boise, he met with the Idaho governor and Boise’s Basque-American mayor Dave Bieter and signed an agreement with Boise State’s Basque Studies Program to continue providing support.

Crazy Wheels, a band from the Basque Country who was invited to Jaialdi, and two Oinkari dancers performed for the audience. The Boise Bihotzetik choir also sang at the reception.