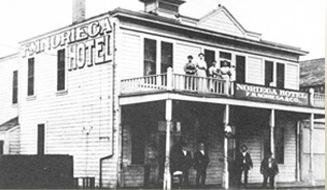 The Noriega Hotel in early Bakersfield.

The history of the many Basques in Kern County has been painstakingly recreated by authors and researchers Steve Bass and George Ansolabehere, who recently published their work in a book, “The Basques of Kern County.”

“We uncovered a lot of things that were very interesting,” said Bass, a retired history teacher who previously spent a considerable amount of time researching early Basque explorers to the New World. Ansolabehere, a retired civil engineer, had previously researched the large Ansolabehere family tree and was very familiar with Bakersfield’s Basque families.

Read about what the Bakersfield Californian had to say about their book.

Among the intriguing facts they discovered was the story of Gracian Etchechury who walked to Kern County from Argentina, the fact that early sheep rancher Jean Bidart died in the Spanish flu epidemic of 1918, and that the family members running the Pyrenees Bakery are relatives of the first Basque woman in Kern County, Marianne Laxague.

They researched all the early Basque hotels and uncovered that the Hotel Des Alpes had been located right next to the latest Pyrenees Bakery building, but no one knew, said Bass, because it was converted to a commercial building.

The largest working ranch in California — the Tejon Ranch just south of Bakersfield — first belonged to a Basque, Jose Antonio Aguirre, who was awarded the ranch in 1843 as one of the early Mexican land grants.
Three Inda sisters were mentioned among the earliest immigrants to Bakersfield, but Bass and Ansolabehere discovered a fourth sister, Mary. All of them married prominent early Basque pioneers.

Also be sure to see the comments at the bottom of the page.

The largest family may be the Ansolabeheres. Their first ancestor to Bakersfield was Jean, who arrived in 1881. He married Marie Eyherabide and they had nine children. Other relatives from the same family joined them. At one point, Bass noted, five Michel Ansolabeheres were living in the Bakersfield area. Teachers were confused by the large family to the extent that they renamed two cousins who were both named Jean Ansolabehere, “John Five” and “JohnSix,” based on the grade they were in. “That’s all they were ever called, because they couldn’t tell them apart,” noted Bass.

Mary Grace Paquette’s book, “Basques to Bakersfield,” published by the Kern County Historical Society in 1982, was the pioneering work on the topic, and the two men used much of the information as the basis of their book.

“She did a fantastic job,” said Bass, noting that they were able to verify almost everything she wrote with current family members. Some name misspellings were corrected. Bass noted that she mostly collected information through interviews, which may have led her to misspell a few of the complex Basque names. The two men visited Union Cemetery, Bakersfield’s oldest cemetery, and looked for gravestones to confirm spellings.

The old Basque neighborhood was in what was then known as East Bakersfield, next to the train depot. They were able to pinpoint former restaurants, hotels and grocery stores. They interviewed at least 100 people for the book, a couple of whom have died since then. The authors note in their book that they feared that much of the history of the local Basque families would disappear if they didn’t record it.

Bass notes that he first got the idea for the book when Professor Steve Gamboa of Cal State Bakersfield asked him to speak on the early Kern County Basques in 2009. Since then, Gamboa, a philosophy professor, always passes requests for presentations to Bass, including one on Jan. 12 for the Kern County Historical Society.

Bass, whose wife is Basque, first became interested in Basque history many years ago when he took a class on Mexico and noted that a lot of the historical names mentioned were Basque, yet they were called Spaniards.

Much of the book is made up of vignettes of local Basques. which are included word-for-word from interviews. Bass said almost all the men started out as sheepherders, although there were a couple of chefs and another couple of cowboys. Almost all the Spanish Basques immigrated from the Baztan Valley in Nafarroa, while the French Basques came mostly from the towns of Baigorri, Urepel, Aldudes and Banka.

The authors also used a lot of data collected by Basque researcher Koldo San Sebastian of Reno. Bass notes that the research and writing took three years to research.

Only one significant problem surfaced while publishing the 300-page book. It has no index. Bass notes that creating the index, which had to be done after the pages were printed, would have fallen to him, and with the hundreds of names, many of them duplicate and triplicate names, “it would have been a mind bender.” The missing index will hinder researchers, but is not likely to bother those reading for pleasure.

For more information, please email Bass at steve@bassque.com. If you’d like to order by mail, send your name and address and $25 per book to cover tax and shipping to Kern History Book, c/o 12012 Tulane Park Place, Bakersfield, CA 93311. Checks must be made out to the Kern County Basque Club. (Purchase info updated May 2021)