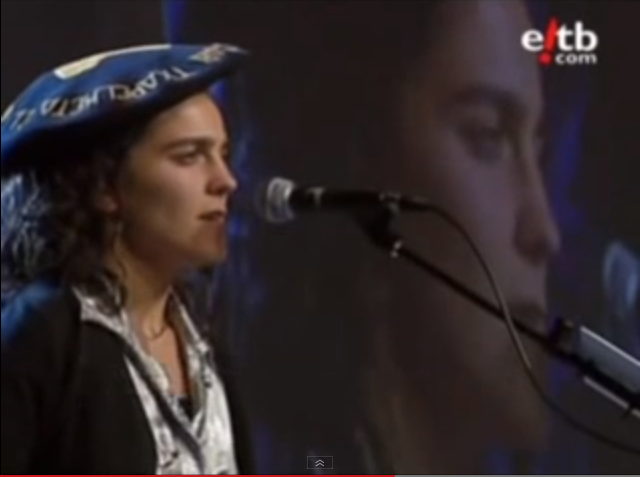 In my last article on learning Basque, I wrote about immersing oneself in an environment where Euskera is spoken as the best way to learn the language. However, for those of us outside of the Basque Country, this is difficult.

Basque clubs try to address the desire to learn Basque in the United States by hosting lessons. But if you don’t live near one of these clubs, your options are limited.

Buy their albums from Amazon

Over the years, I found enjoyment and some success in learning a few vocabulary words from songs. But the album or CD had to include a translation of the words into English, Spanish or French, in order for it to work for me. One of my favorite albums was Peio eta Pantxoa’s Euskalduna naiz eta maite dut herria, which was accompanied by the lyrics in four languages. I learned many words from the songs. My favorite was “Baionako Suprefecta.”

Learning vocabulary this way made me think of my friends in the Basque Country who told me they learned some English by listening to songs of the Beatles. They loved the music so much they were compelled to listen and learn.

Today, the easiest option is to listen to videos in Basque on the internet. However, few include English translations that help me understand what’s being said. I will be looking for Youtube videos with subtitles to add to the playlist above. Check back occasionally to see what videos may have been added to the list.

The first video on this playlist, Bertsolari Pilota is a short feature on bertsolaritza — the Basque art of creating impromptu verses. I have heard bertsolaris singing my entire life, at many Basque functions. They are essentially an more traditional version of rappers, who improvise rhyming verses in Basque about any topic, right in the moment. Despite efforts over the years to learn Basque, I have never learned enough to understand them. But I knew what they did was special when I watched my father, Jean Baptiste Zubiri, listening to them. Usually a fairly unemotional man, my father would inevitably laugh and cry at the same time as they sang. That weepy reaction that most people experience is what led Asier Altuna to make the documentary highlighted in this video.

Amazon: A great book to
learn about the Basque language

The largest Bertsolaritza championship (Txapelketa Nagusia), held every four years in the Basque Country has become a huge affair, which you can see by watching this short video. Up to 14,000 people buy tickets to attend the event. Many factors come together to generate this interest: the preservation of the unique Basque language and the touching verses, usually conveying messages about life. The shots of the audience’s reaction to the verses show how moved they are by the words. A film review of the final movie by Rebecca Naughten gives a stirring description and history of the bertsolari art.

The next national bertsolaritza championship is in 2017. Perhaps I should make it a goal to learn enough Basque to attend and understand the bertsolaris.

For now, I can only catch a word here or there to let me know what the singers are talking about. Some words come from Spanish, so those are easier for me. I learned a few words by watching this video. Hopefully these videos will help you learn a few words as well.

// Bertsolari Pilota
Some words in the order they are presented:

Pantxoa eta Peio singing one of their popular songs.