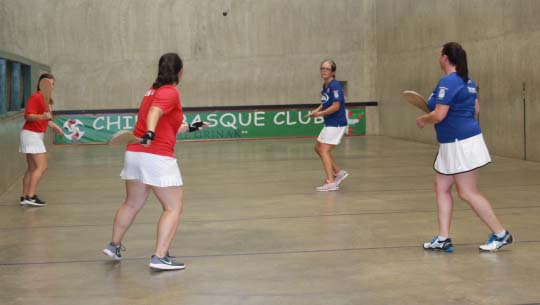 The 2017 pilota finals for the North American Basque Organizations were held at the Aphessetche Trinket in Chino, Calif. this year for the first time. The games took place Saturday, Sept. 2.

In the youth pala category, brothers Aingeru and Asier De Luz of Bakersfield beat their competition Nico Calderon and Riley Anema of Chino. Aingeru De Luz said he and his brother spent a few weeks  in their father’s hometown  Zumarraga in the Basque Country this summer and played pilota or pala every day, sometimes a couple of times a day. “We played these 12-year-olds. They were really good,” he said.

For the women’s games, the more experienced Teresa Iparraguirre and Michelle Freibel beat their younger counterparts in paleta goma. Iparraguirre is also the NABO Pilota chairwoman and was in charge of running the games.

The trinket, built in 1981 by former dairyman Xavier Aphessetche, with its roof and open air side walls along the top provided a bit of relief from the heat which topped 105 degrees during the afternoon. A five-minute rainstorm provided momentary coolness. The court has four cement walls, although the left-handed wall bumps out over a spectator viewing area, a feature that provided some unexpected bounces for many of the non-local players.

For more information about playing pilota at the Aphessetche Trinket, click here.

Final scores in the championship:

Class B Paleta Goma Semi-Final: San Francisco A. Camou and O. Sidbie 40 vs. Boise’s PJ Mansisidor and A. Eiguren 21