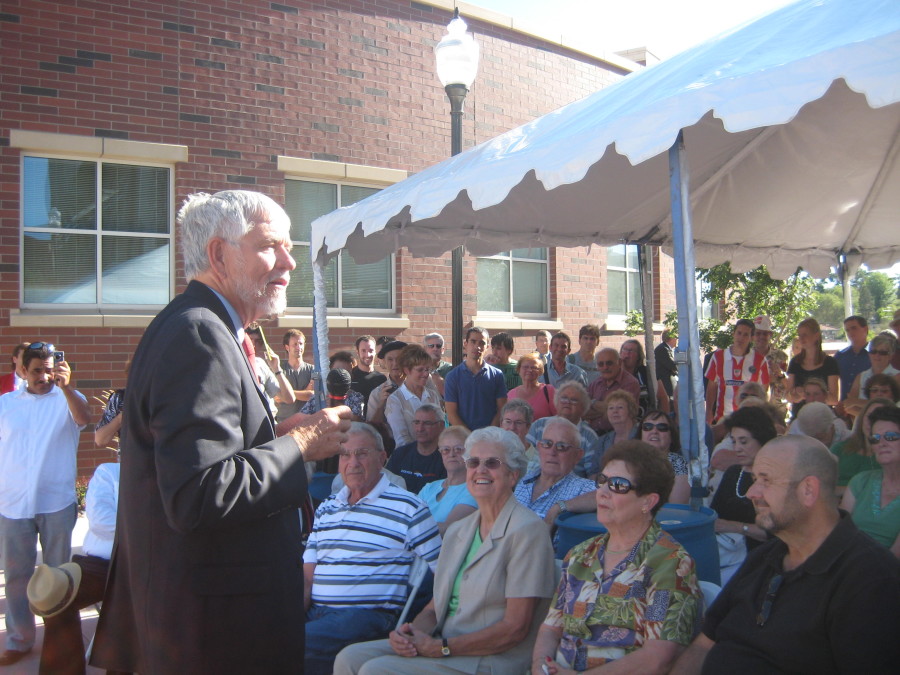 Dozens of people attended the dedication of the new location of the Center for Basque Studies at the University of Nevada Reno.

The July 24, 2009 event helped kick off the annual convention of the North American Basque Organizations, which was held in Reno.

The dedication began with a reception right outside the Center’s library located in the new Mathewson-IGT Knowledge Center on campus. Many of the visitors included NABO delegates from all over the country, as well as local supporters of the center.

The Basque center at UNR is the leading academic venue outside the Basque Country dedicated to research of Basque-related issues, Center co-director Eric Herzik told the audience. It maintains the largest special collection in the University’s library.

“It is the work of hundreds and hundreds of people over the last 40 years,” said William Douglass, professor emeritus and former coordinator for more than 30 years. Douglass was instrumental in founding the center, when it was known as the Basque Studies Program.

Douglass related a bit of the history of the center as it moved from one location to another. It started 42 years ago as one small cubicle occupied by his “messy desk,” to its modern spacious location in the red brick building. There, he joked, he continues to have a small office with a messy desk, but now his is the least significant in the new center.

The president of the university, Milton Glick, and the new minister of exterior relations of the Basque Country, Guillermo Echenique, also spoke to the crowd.

Echenique spoke on behalf of Patxi Lopez, the new lehendakari or president of the Basque government in Spain, extending his congratulations on the inauguration of the new headquarters. His appearance in Reno was the first visit to the U.S. by a representative of the Basque Socialist Party, newly elected in March.

Previously located in a corner of the Getchell Library, which is now closed, the Basque collection was moved to its new space last year, related office manager Kate Camino, after the Knowledge Center opened in August. The official inauguration of the center, however, was timed to coincide with the NABO convention, which attracted many Basques from outside of Reno.

The new library is highly specialized with advanced technological capabilities, to provide researchers with easier access to its resources. Even the bookshelves themselves represent the latest technological advances, accessed via a numeric keypad that works to open the shelves.

The library has an extensive collection of thousands of photographs which the staff has spent the last few months cataloguing in order to make them available via the internet, according to Marimar Ubeda, in an article in the Center for Basque Studies Newsletter. Although the digital photograph collection is still not complete, it is available online.
The digital collection is part of a larger collection of photographs donated by numerous individuals that have great historical value for the Basque community, wrote Ubeda. Many of these collections can be accessed online as well.

The library’s many resources are available online in several languages. This bibliographic database has been in the works for many years, started by Basque scholar Jon Bilbao in the 1960s.