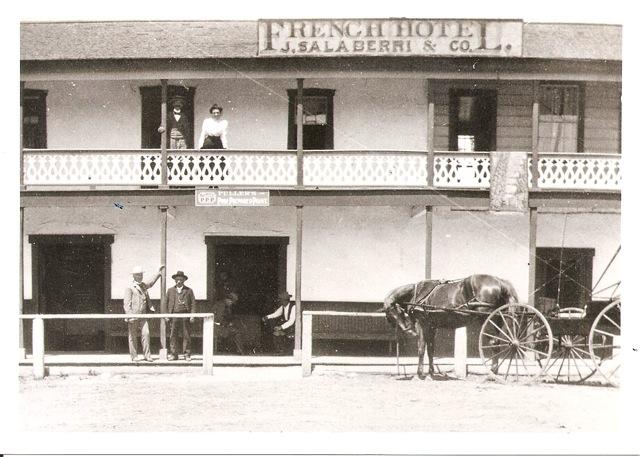 Domingo Oyharzabal and Juan Salaberri ran the French Hotel in Southern California in the late 1800s. Courtesy of Carmen Oyharzabal.

The Basque Museum will unveil two new exhibits on Basque boardinghouses and frontons on Thursday, June 5. The exhibits will include over 100 photos and many items from the historic homes once used by many Basque sheepherders.

“People may not realize how widespread the boardinghouses and the frontons were in their heyday,” said museum curator Michael Vogt about the new exhibits.

The exhibit gallery will also include a number of fascinating artifacts that were discovered during an archeological dig that occurred on the museum property of the Cyrus Jacobs/Uberuaga House.

The early history of the Cyrus Jacobs/Uberuaga House revealed

During a project to repair the floorboards of the covered side porch in 2012, museum staffers discovered the home’s original well, which was completely intact.

“We could see down six to eight feet,” noted Vogt who was present for the discovery of the well. “When we dug down to the bottom, it was 13 feet deep.” At the bottom they found a trove of old household objects such as ceramic doll parts, medicinal bottles, pieces of plates, beef bones and other items. Vogt said they estimate the fragments date back to the 1870s, because that’s when the covered porch was added, and the city began providing water to its residents in the 1880s. Some items could be traced back to Boston and even England.

Visitors will be able to see many of the artifacts recovered from the family well during the archaeological excavation that took place on site during the summer of 2012. The museum found many old relics during a similar surprising dig in 2004, but this discovery prompted the museum to call in some professional archeologists to oversee the job.

“Visitors could see the whole project,” said Vogt, as artifacts were uncovered and cleaned on the porch surrounding the old boardinghouse. However, after the dig, the archeologists took the pieces to the university, to study them. This will be the first time the items will be on display at the museum.

The Expanding Horizons Public Recognition Piece will be unveiled on the 5th at 7 p.m. The new exhibits will open at 7:15 p.m. As part of the local First Thursday celebration, musicians will be playing, and appetizers and beverages will be served.