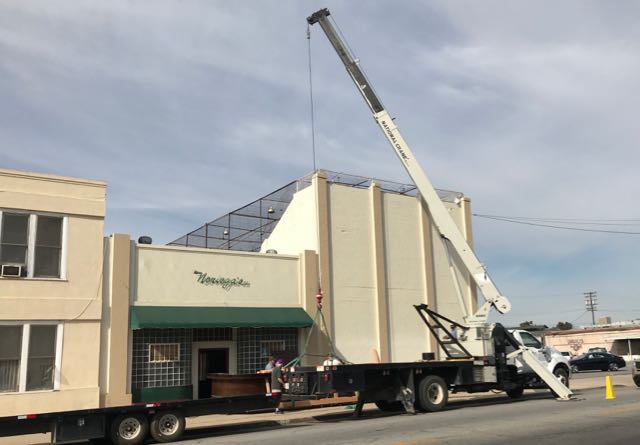 A crane was used to move the historic bar from Noriega's to the Kern County Museum after closing of restaurant.

Updated July 2021: A new Noriega’s, with menu, chef and decor from the original Noriega’s, has opened at 4809 Stockdale Hwy.

The doors finally closed on Noriega’s, the oldest Basque boardinghouse-style restaurant in the West. The historic Noriega Hotel in Bakersfield, California was brought down by the coronavirus pandemic.

Years and years of mementos and memories left the two-story historic building in recent days, as a June 30 final deadline for the shuttering of the restaurant loomed and people and organizations bought items from the restaurant.

The Elizalde family, which had owned the restaurant and boarding house at 525 Sumner St. since 1931, announced on Facebook that they would not be reopening after coronavirus restaurant closures were lifted. The April 24 post generated 386 comments and was shared 750 times. The Bakersfield community and the Basque community were devastated.

“It was an institution,” acknowledged Rochelle Ladd, who with her sister Linda Elizalde McCoy and daughter Brianna had run the restaurant in recent years. The community response was surprising to the family, considering that “business hasn’t been that good for the past few years,” she added.

In early years, the restaurant’s location next to the railroad depot brought in the customers – young men from the Basque Country who got off the train looking for employment as sheepherders. More recently, however, the location became a detriment as Old Town Kern lost its sheen.

Nevertheless, locals celebrated marriages, birthdays and other special occasions at the historic institution, whose old-world homey setting and generous portions made the clientele happy. The restaurant was granted the prestigious James Beard award as an “American classic” in 2011, for its food and appeal. Read our story about Noriega’s James Beard award.

The primary reasons behind the family’s decision were increasing rent and the pandemic, which prompted government health officials to close restaurants. The restaurant stopped serving customers on Tuesday, March 18.

Noriega’s owners worried that when the closures were lifted, the family-style dining and shared tables that were an essential part of the Noriega experience were likely to be prohibited. “We could see the handwriting on the wall,” Ladd said, explaining Noriega’s closure.

“This has been an incredibly difficult decision for the family to make and one that wasn’t taken lightly,” the family posted on its Facebook page.

MORE STORIES FROM EUSKAL KAZETA
Basque Restaurants in the U.S.

“Most of us thought COVID would be the end to family-style dining,” said Steve Bass, whose family has held numerous events at the restaurant over the years, including his two sons’ wedding receptions. “That was the charm of Noriega’s,” he said.

Initial negotiations after the Facebook announcement included attempts to keep Noriega’s going in the same location under different ownership in an attempt to preserve an important piece of Basque history.

A local businessman, Seven Bates, hoped to keep the restaurant alive in an arrangement that would involve the Elizalde family and started a “Save the Noriega Hotel” Facebook. “I’m glad to have had a Picon Punch and an ABC (Amaretto, Bailey’s and coffee) a few days before they closed,” Bates said. He called McCoy’s Bloody Mary “an art form.”

Ladd said they received so many offers from people who wanted to buy the business, including calls from Europe, that they had to use a business broker to field the queries. “It was getting out of control,” she said. The broker led them to local restaurant owner, Bill Osathanugrah, who already owns two restaurants in Bakersfield, Happy Wings and KK’s Café.

Osathanugrah bought the name, the liquor license, the tables and much of the interior décor. He is looking for a location to lease as soon as possible. “We’re gonna try to make it look the same,” he said.

The Elizalde family moved ahead with plans to sell all the items, but cancelled their final liquidation sale because all the restaurant’s furniture and decor went so quickly. Bass said he personally received requests to save items for posterity, including from the Basque Museum in Boise and a museum on the Basque diaspora in the Basque Country.

The restaurant’s historic back bar, which dates back to 1940, was purchased with the help of donations and moved to the Kern County Museum. The museum is planning a display commemorating Noriega’s in its Trolley Car Station.

Started in 1893 as the Iberia Hotel, it later became the Noriega Hotel. In 1931, Gracianne “Grace” and Jean Elizalde, who Ladd referred to as “Amatxi” and “Aitatxi,” bought the hotel from the Noriegas.

Many people have expressed their sorrow over the loss of the iconic institution and what it may portend for other similar family-style Basque establishments across the West.

“It hurts us too,” Ladd said. “I feel so bad for the employees and customers that were there regularly,” she said. But she added: “Everything has an end.”

Noriega’s was the oldest Basque boardinghouse still in operation in the American West. Next in line is the Martin Hotel in Winnemucca, Nevada, established in 1898, and not far behind is the Star Hotel in Elko, Nevada, built in 1910.

A great video on the way things were.