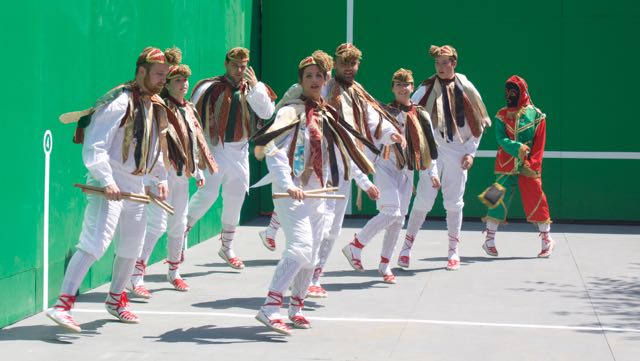 The National Mall turned into a huge Basque celebration on Day One of the Smithsonian Folklife Festival today. The Smithsonian is exploring the unique language and distinct heritage of the Basque people through “Basque: Innovation by Culture.”

The opening ceremony, at the Smithsonian’s newly renovated Art and Industries Building, included comments from Smithsonian officials and representatives from the Basque province of Bizkaia, who helped sponsor the event. Other sponsors include the governments of Navarra, the Basque government and the provincial governments of Araba and Gipuzkoa.

Musician Kepa Junkera played his trikitixa while contemporary dancers kicked up their feet for the crowd. Bertsolaritzas from the U.S. and the Basque Country improvised verses specifically for the American crowd.

In addition to highlighting the Basques, the festival is also giving the stage to “Sounds of California.”

The Basque constitute perhaps the oldest community in Europe, and today approximately 1 million people worldwide speak Basque, or Euskara, a language once on the brink of extinction and now an example of successful language revitalization. The 2016 Festival is hosting musicians, cooks, language experts and more from the region to explore themes of cultural sustainability, identity and migration. Of the 330 participants in the festival, about 70 percent are people of Basque descent living throughout the United States, according to festival media representative James Mayer

“Celebrating Basque culture at the Smithsonian Folklife Festival is an important opportunity to bring forth compelling stories of cultural heritage, vitality and resilience,” said Rep. John Garamendi (D-Calif.), a Basque American who represents California’s Third District, who spoke at the opening ceremony. “These are American stories, too. I’m delighted that Festival visitors will also experience Basque traditions that remain an integral part of this country’s cultural landscape.”

“I think of the story of my grandfather who came from the Basque Country in 1906, from the impoverished village of Lekeitio,” related Garamendi. He explained how his grandparents both came to the U.S. where they struggled to get ahead. “That is the story of America, where each generation looks to do better than the one before.”

The Festival will be run from Wednesday, June 29, through Monday, July 4, and Thursday, July 7, through Sunday, July 10, outdoors on the National Mall between Fourth and Seventh streets. Admission is free. Festival hours are from 11 a.m. to 5 p.m. each day, with special evening events beginning at 6:30 p.m.

Kepa Junkera and Sorginak presented a well-attended evening concert on the mall. Among the first day’s participants were the dance group Gauden Bat of Chino, Calif., and Noka, a female trio also from Chino, with Basque Country folk singer Mikel Markez.

The Smithsonian Folklife Festival, inaugurated in 1967, honors contemporary living cultural traditions and celebrates those who practice and sustain them. Produced annually by the Smithsonian’s Center for Folklife and Cultural Heritage, the Festival has featured participants from all 50 states and more than 100 countries. Follow the Festival on Facebook, Twitter, Instagram and YouTube. Festival fans can also keep up with each day’s events through the Festival Blog.