Performance by youngsters to kick off Elko Basque Festival 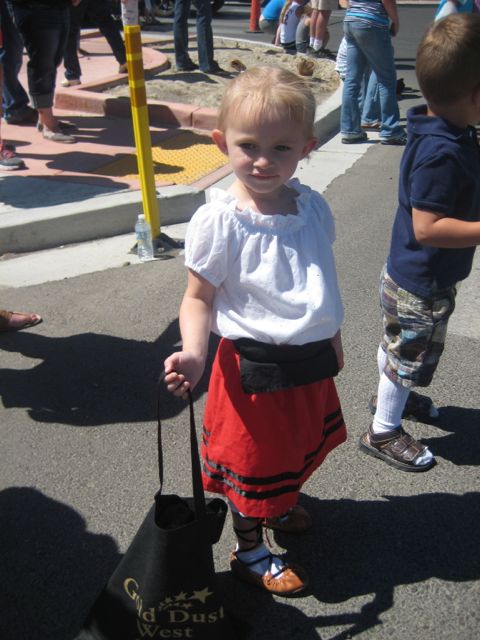 This young spectator dresses for the Elko Basque parade.

This year, the three-day National Basque Festival in Elko, Nevada will kick off Friday July 4 with a showcase of Basque culture by young campers.

The Elko festivities start earlier than usual, at 4 p.m. with the youth show at the Elko Basque Clubhouse (1601 Flagview Dr.). The participants at the Basque summer camp known as Udaleku will be demonstrating dances, music and other cultural traditions they’ve learned during the past two weeks.

At 6 p.m., the traditional festival kicks off, with folk dance performances, weight lifting, wood chopping and a paella contest, all at the clubhouse. Handball players will compete at the Elko fronton at City Park a short walk away. The Fourth of July fireworks show will take place at 9 pm.

“It will be a good place to be on Friday night,” said Teresa Franzoia, director of Udaleku.

The campers are part of Udaleku, the Basque summer camp being held this year in Elko. A total of 64 youngsters ages 10-15 are attending the camp, which rotates every year to a different Basque community. The group includes youngsters from California, Nevada, Idaho, Wyoming and even Texas.

The campers have been taking classes from several Basque experts, including culture teacher Lisa Corcostegui from Reno, Basque Country musician Eneko Espino and Basque Country dancers Jexux Larrea and his son Mattin Larrea. Monique Flesher is back as the favorite mus teacher. In addition to dancing and mus, the campers are learning euskera, pandero (tambourine) and txistu. Bob Echeverria is teaching them how to make makilas (walking sticks). Classes are taking place at the clubhouse and at the Headstart building nearby. They are practicing their handball and pala skills at the Elko fronton. See the Elko Daily’s story on Udaleku.

The youngsters hiked in Lemoille Canyon, visited two local gold mines and even experienced a six-hour lockdown one day, during an Elko police incident, said Franzoia. She will be missing the campers’ final performance because she is leaving for Gaztemundu in the Basque Country. Franzoia was one of a few Americans selected for Gaztemundu, a workshop sponsored by the Basque government in Spain to help promote the Basque culture throughout the world.

On Saturday, the National Basque Festival starts early with a 5K run at 7 a.m., starting at the clubhouse, and the annual parade takes off at 11 a.m. in downtown Elko. The festivities continue at 1 p.m. at the fairgrounds again with more dancing, weightlifting, woodchopping, weight-carrying and tug-of-war. Dancers from Elko, Reno and Utah will be performing.

Amuma Says No, the popular Basque rock band from Boise, will entertain the crowd during the evening dance which starts at 9 p.m. at the Elko clubhouse.

On Sunday, the traditional Basque picnic, with barbecued tri-tip and lamb stew, will be served at the Basque clubhouse. The sheepherder’s bread contest starts early, at 10:30 a.m., followed by the mass at 11 a.m. and then the barbecue lunch. More dancing will follow in the afternoon. A jota and irrintzi contest is fun to watch.

This year, the Elko Basque Club website includes a countdown to the festivities. Check it out!