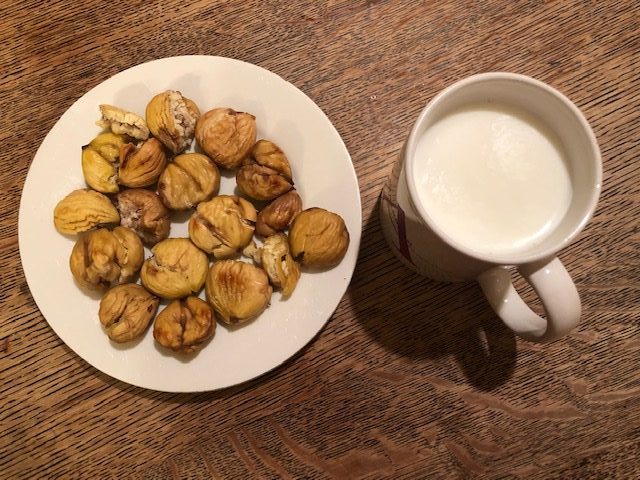 My family in the Basque Country ate their roasted chestnuts with warm milk.

The first line of the famous “Christmas Song” about chestnuts roasting on an open fire was a  reality for many Basque families in the early 1900s. In fact, roasted chestnuts helped many poor farming families in the Basque Country make it through the wintertime, when fewer fruits and vegetables were available.

The European sweet chestnut trees were prolific in the Basque Country and the chestnut is highly nutritious, with complex carbs, fiber and several vitamins and minerals, including a hefty dose of Vitamin C. It also contains antioxidants which are not harmed by the roasting. Chestnuts have been eaten since ancient times. Families would roast the chestnuts in the fireplace. 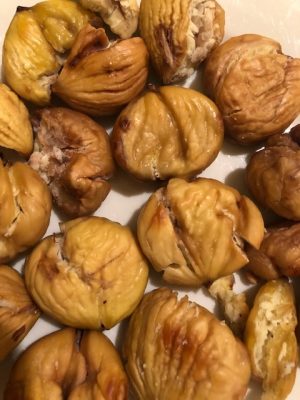 “Those were fun nights, sitting around the fire,” said one of my older cousins who grew up in the small town of Esnazu, on the French side of the Pyrenees . “We had a special pan with a handle hanging in the fireplace. “ She recalls turning the chestnuts in the metal drum-like pan to keep them from burning. They typically ate the chestnuts for dinner, often accompanied by warm milk.

She also remembers eating green chestnuts, in the first days after harvesting them from the trees on the mountainside behind the family home. “We used to boil them and they had a completely different flavor,” my cousin says.

The nuts are covered by a prickly outer shell known as a bur, which they would get off with a shoe or a shovel. Families would pick the chestnuts from the tree in the fall and store them in cool, dark storage rooms where they lasted for many weeks. They would bring out a bucketful whenever needed.

The importance of chestnuts in Basque culture is illustrated by Gaztañarre Eguna, or Chestnut Day, a tradition which is celebrated in some towns in early November. Chestnuts are roasted in drums known as tamborils and sold on the street.

Porrusalda and Other Basque Soups

In earlier times, because of the abundance of chestnut trees, they were a food enjoyed by rich and poor alike. In the US, the low demand and the fact that they are imported makes them a bit expensive. In recent years I have seen them for $5.99 a pound. This year, they seem more difficult to find and very expensive. A recent price of chestnuts in a Southern California supermarket was $11.99 a pound.

In the U.S., chestnuts are found in markets around Thanksgiving and Christmastime. Luckily, nowadays they are easier to cook. 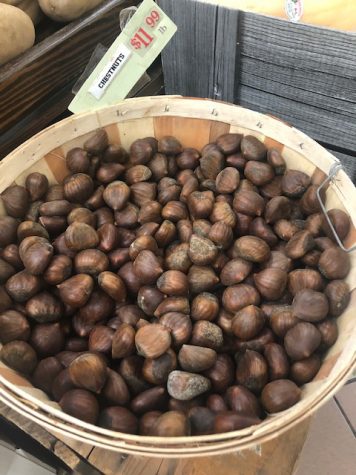 When choosing chestnuts, it’s best to pick them one by one. Check to make sure they have no black dots, which could indicate a worm. Once you buy them, keep them in the refrigerator and use them promptly, as they can quickly get moldy.

Preheat the oven to 375 degrees. Use a small, sharp knife to cut a slit into the side of the chestnut, piercing the shell. This is important to keep them from exploding.

Put them in a baking pan in the oven and cook them for approximately 20 minutes. Pull one out to see if they are ready. They should be soft to the bite.

Take the pan out and wrap the chestnuts in a wet towel for 5 – 10 minutes.

Enlist some help to peel the chestnuts quickly, as letting them cool too much can make them more difficult to peel. Smashing them lightly with a hammer helps release the shell.

Chestnuts are a tasty addition to many dishes including turkey stuffing. Buche de Noel, a French Christmas classic cake, is traditionally made with chestnut puree. They can also be purchased already roasted and peeled. Click here to purchase these delicious peeled chestnuts from Amazon.