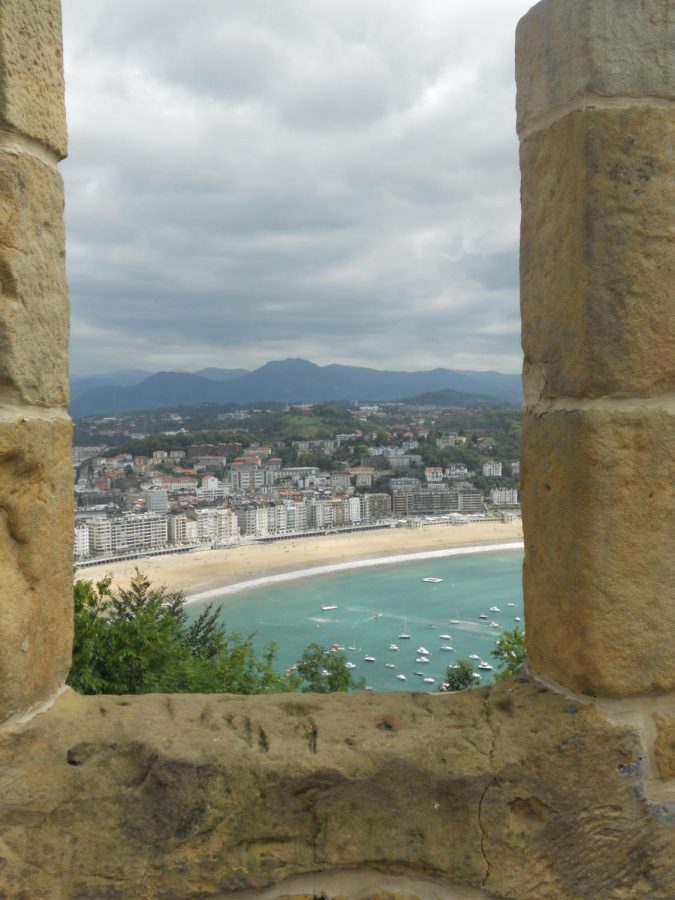 San Sebastian. In the Basque language, it’s known as Donosti. It’s the most famous city in the Basque Country.

With a population of 188,000, San Sebastian is not the Basque Country’s biggest city – that’s Bilbao at 345,000. But its picturesque setting alongside La Concha Bay, its beautiful beaches flanked on both sides by prominent hills, plus the waterside promenade with its 100-year-old white decorative railing and historic lampposts make it irresistible.

The small island in the bay adds to the seaside resort’s unique landscape. And a bounty of pintxo bars, plus several of the best restaurants in the world are located here, attracting visitors from around the world. Many people come to San Sebastian specifically for its excellent cuisine. (Read about the top Basque restaurants in Europe.)

The San Sebastian international Film Festival, which started in 1953, brings stars and filmmakers from many countries every year, adding to the resort city’s cachet. The festival, scheduled annually in mid-September, includes a variety of specialized categories of films, including Zinemara, which features films produced or directed by Basques. (Read our story on past festivals)

San Sebastian maintains its Basque traditions and has the largest number of Basque speakers of any city in the Basque Country. It is the capitol of the province of Gipuzkoa, which is part of Euskadi, the Basque Autonomous Community.

San Sebastian is a very walkable city. Its many neighborhoods all have very good local supermarkets, small food stores and bars and restaurants, which make almost any neighborhood a good place to stay. Summer is the best time to visit, but it can rain here any time of year, so bring an umbrella.

Visit the Beaches and Surrounding Area

San Sebastian has three beaches. The main beach, Playa de La Concha, facing La Concha Bay, is one of the top beaches of Europe. Santa Clara Island in the middle of the small bay keeps the waves small. Ondarreta lies to the west and, as the least known beach, it’s also a bit more tranquil and good for families. To the east over the Urumea River and outside La Concha Bay lies the rougher Zurriola. This is the beach to visit if you want to see the surfers because of its exposure to the ocean. Surf classes are offered here.

During the summer, a ferry makes the quick trip to Santa Clara Island daily. The small island has a bar and a walking path that make it an enjoyable visit. During low tides, a small beach is available as well. It is even reachable by kayak.

This beautiful seaside town was the summer residence for the Spanish Royal Crown during the late 1800s and early 1900s. The well-maintained gardens of Miramar Jauregia or Miramar Palace, where the royal family lived during their stays, are open to the public and provide a pleasant visit, especially for the views they provide of the picturesque bay. The building currently hosts the summer courses of the University of the Basque Country and is available for tours.

Summer Festivals in the Basque Country

What is the Basque Country?

Monte Urgull, with its fort Castillo de la Mota at the top that houses a small museum, is a wonderful way to spend an afternoon. It’s an easy uphill stroll surrounded by trees that makes you feel far away from the nearby urban scape. A giant statue of Jesus, Monumento del Sagrado Corazon, stands atop the hill’s highest point. At the bottom, the Paseo Nuevo walkway gives you a close view of crashing waves and the “Construccion Vacia” sculpture of Jorge Oteiza. The city’s port hugs the west side of the hill and the Basque Maritime Museum, which is free, is located here.

At the other end of the bay, you have Monte Igueldo, with a historic amusement park at the top. This hill is steeper than Urgull, but there’s a funicular railway that gives visitors a ride up to the top. At the bottom is the famous Haizearen Orrazia or Wind Comb sculpture by Basque artist Eduardo Chillida.

One of the top reasons people visit San Sebastian is to taste some of the best pintxos in the world. Pintxos are typical Basque fare – tasty bites of meat or seafood served on a small piece of bread, usually with a toothpick in the middle, holding it together. In fact, places that serve pintxos will charge customers based on how many toothpicks they have, because the pintxos are out on display and patrons can serve themselves. They are meant to be eaten with a glass or two of wine or the Basque version of sparkling wine, txakoli.

Take a stroll through the popular Old Quarter (Alde Zaharra in Basque), a maze of narrow cobbled streets where buildings date back to the mid-19th century. The best pintxos are here.

There are least 20 pintxos bars in this neighborhood and all are good. You might need to elbow your way through the crowd at Gandarias and La Cepa de Bernardo, two of the best and both on 31 de Agosto Kalea. Goiz-Argi and Mendaur Berria are on Fermin Calbeton Kalea. Bar Txepetxa (Arrandegi Kalea, 5) is famous for its anchovy pintxos. Or stop by Bar Nestor (Arrandegi Kalea, 11) for their tortilla de patatas (See our recipe for tortilla de patatas) If you want to eat Burnt Basque Cheesecake (Watch our video) at the restaurant where it originated, visit La Viña Restaurant at 31 de Agosto Kalea, 3.

Other places to visit in the Old Quarter include the Museo San Telmo and the Basilica of St. Mary. Hang out in Plaza de la Constitucion, right in the middle of the Old Quarter. This plaza, which in its early days served as a bullring, is a normally a tranquil spot to drink a glass of wine and take in the local atmosphere.

At the latest count, San Sebastian and the immediate surrounding area have 11 Michelin star restaurants which claim a total of 19 Michelin stars. No trip is complete without a visit to one of the restaurants in this gastronomical paradise.

Three of the restaurants have three Michelin stars. The most famous, perhaps because of how long it’s been in business and been winning awards, is Arzak, run by chef Juan Mari Arzak and his daughter Elena Arzak. It’s a family business, having been started by his grandparents in 1897 as a wine shop and bar. The tasting menu currently costs 225 euros and with a wine pairing is 410 euros. (See addresses at the bottom.)

The second three-star restaurant is Akelarre, located on Monte Igueldo and boasting a marvelous view of the ocean. Chef Pedro Subijana runs this three-star facility, which now includes a luxury hotel and spa. Their traditional tasting menu costs around 240 euros.

The original restaurant of Basque chef Martin Berasategui, who has amassed 12 Michelin stars throughout the world at his various restaurants, is located just outside Donosti in Lasarte-Oria, in a more nature-like setting.

Two Donostia area restaurants have two stars: Amelia and Mugaritz. Amelia is located in the Hotel Villa Favorita, along the bay. Mugaritz, like Berasategui, is a bit outside Donostia in a renovated farmhouse in Errenteria (Renteria). It closes for four months every year, according to its website, to devote time to creativity. The list of the 50 Best Restaurants in the World claims that this restaurant is the second best restaurant in the Basque Country. The tasting menu here is $220.

Six restaurants in Donostia have one Michelin star. While also amazing, these restaurants are not as expensive as others mentioned here and might be good places to indulge your palate without indulging your wallet. eMe Be Garrote is one of Martin Berasategui’s newest restaurants and is located in a former ciderhouse. A tasting menu here is a more reasonable 98 Euros. Elkano is known for its grilled fish and seafood. Kokotxa is located in the Old Town. Mirado de Ulia is located in a villa and is one of the only ones to offer vegan dishes. Zuberoa is in the oldest farmhouse in the nearby town of Oiartzun and Alameda is in Hondarribia and has held its Michelin star for more than 20 years.

The Tamborrada – a traditional Basque festival of drumming takes place Jan. 20, the feast day of the city’s patron saint Sebastian. The city’s biggest celebration stars at midnight of Jan. 19 in the Plaza de la Constitución, where the city flag is raised. Different groups, big and small, continue drumming through the Old Town for 24 hours.

Karmengo Jaiak – the festival of the port of Donostia – takes place the second weekend of July. The port fills with dancing, roving bands and “gigantes y cabezudos” (giants and big heads) and lots of good food, with grilled anchovies in particular. Read our story about the greased mast competition and other fun activities during Karmengo Jaiak.

Donostiarras (as the locals are called) find many reasons to party. They come out on July 31, the feast day of the patron saint San Inazio, and take to the streets for a whole week during Aste Nagusia – the third week of August.

If you’d like to catch the city at its most cosmopolitan, consider coming for the San Sebastian International Film Festival, which takes place mid-September – this year Sept. 16 – 24 2022. You can buy tickets to any of the films online.

**Disclosure: links above are affiliate links which means at no additional costs to you, we earn a commission if you click through and make a purchase.