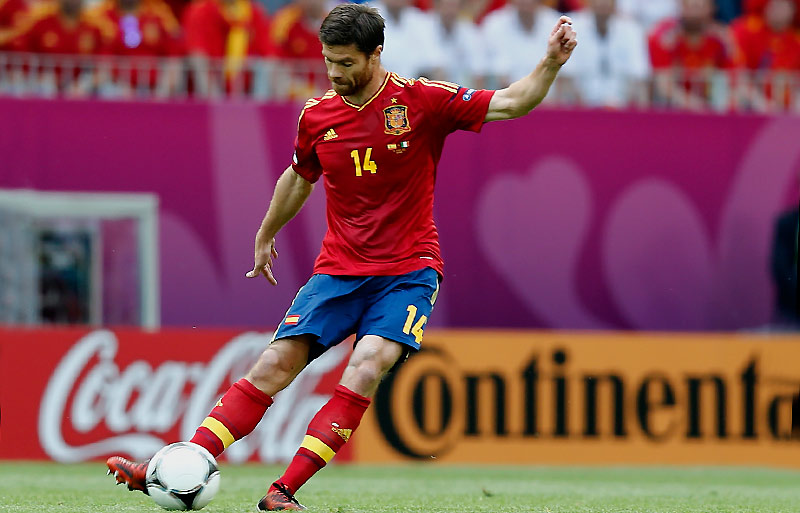 Xabi Alonso is playing in his third World Cup.

“In terms of depth and the amount of Spanish talent produced, Basque Country is almost unrivaled for their production of footballers,” states the soccer news website Bleacher Report.

A Basque Country national soccer team has existed over the years, although they have no official recognition and play only friendly games.

The FIFA database website Futhead even has a projected “Basque Country national team.”

On the French national FIFA team, the goalkeeper, Stephane Ruffier, and the coach, Didier Deschamps, are Basque.

Was a key player in Spain’s 2010 World Cup team and also played in 2006. His father and brother also played soccer professionally.

Currently plays for Chelsea in England. First time on the World Cup team.

Javi Martinez Aginaga: midfielder #4. Age: 25. From Estella-Lizarra, Nafarroa. Started playing in Osasuna, but was recruited to Athletic Bilbao at age 17.

Currently plays for Bayern Munich in Germany. He played in Spain’s last World Cup team in 2010.

Didier Deschamps: coach. Age: 45. From Baiona, France. Deschamps also started his career in Aviron Bayonnais. Most of his career successes occurred while playing for Marseille, and he was captain of the French national team when France won its only World Cup in 1998.

In January, the Bleacher Report posted a rundown on the top Basque soccer players in the world, who they play for, and what their prospects were if they played as their own national team in the World Cup.

FIFA interview with Didier Deschamps on the 2014 World Cup.