Stephanie Braña: Wood Chopping with the Big Boys, and Winning 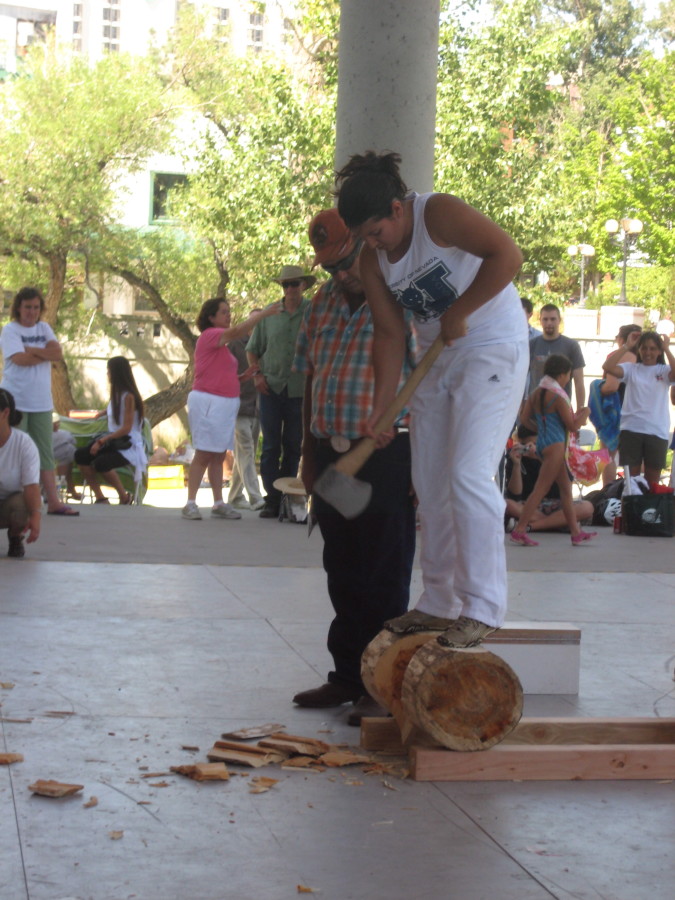 Stephanie Braña, seen here with her coach, is a proficient log chopper.

Stephanie Braña has an unusual hobby–if we can call it that–which is chopping logs.

No doubt she inherited the inclination from her aita (dad) Juan Braña, a well-known aizkolari (woodchopper), who delights audiences at Basque festivals throughout the American West by axing logs as if they were made of butter.

Stephanie Braña started wielding the axe at age 13 and for eight years she has competed in Basque festivals alongside her father. She’ll be competing at the Gardnerville picnic August 8 and at another Basque festival in Carson City in September.

Braña was born in Reno, Nevada, and attends the University of Nevada, Reno (UNR). You might think that at the university she studies forestry, but actually she is into biology and pharmacy. (So, she pays $300 to be part of the UNR team of wood choppers.) There are about 12 to 14 mostly male students, who with axes and chainsaws battle against students from Washington, Oregon, Idaho, Montana, and California universities. The events last a week, and the toughest opponents–according to Braña–are from the northern states of Washington, Idaho and Montana, because they have more funds (and trees, for that matter). Nevada has the least, and for practice the Brañas have to manage with logs that the City of Reno cuts around town. To finance travel, lodging, and meals the team members all pitch in and cut wood in the national forest and sell it in town at $180 a cord, but lately with the bad economy it goes for $150. This way the students earn about $2,000.

Most matches are men against men and women against women, but they must also compete against each other, and usually the men win.

The Brañas say that American and Basque woodchoppers have different techniques. The former try to cut through the log as fast as possible–and the Basques do the same–but in addition, it has to be done in a neat v-shape cut. The students wear steel shoes and mail socks, while Basques wear tennis shoes or just (regular) socks and, mon Dieu!, will drive the axe inches away from the toes.

The best axes are Australian, but they are expensive and Mr. Braña says that UNR imports them from Germany.

–What about Basque axes?, I asked.

–Well, you cannot drive them in like Australian ones. They are heavier, thicker, made for harder wood like beech and oak. Australian steel is better tempered for the logs we cut here.

With practice, Braña has developed her strength. She is at her best when chopping the log horizontally, in the Basque manner, when she usually wins against the women.

Yet, in 2008 at Santa Cruz, California, Braña won the chainsaw competition, as well. She beat all the competing students, boys and girls, from Washington, Oregon, Idaho, Montana, and California. She says that she was surprised, but happy to be the winner. In 2009 in Ukiah, California, again she won the woodchopping competition against all female students.

So what’s next? Braña says that she has been thinking about signing up as a professional woodchopper.