Basque summer camp, known as Udaleku, is a place for Basque-American youth to connect with their ethnic culture. At this year’s Udaleku in Bakersfield, about 100 youth, mostly from different Basque communities in California and Nevada, sang songs in Basque and learned to play the ball game pala and the card game mus. They learned a little bit of the Basque language, known as Euskera — enough to act out a few skits for the camera.

Montserrat San Mames loves Udaleku so much she is back for the ninth time. She attended her first camp in Boise at the age of eight and is back this year from college in Scotland to work as an aide at the camp. She has made lots of friends with young Basque people from many different places over the years.

“It’s a great experience,” said San Mames. “It’s a great opportunity for Basque kids to learn about their culture. I meet new people every year and then you get to see friends you met at Udaleku but that you haven’t seen all year.”

The camp rotates every summer to a different Basque community and local families host the out-of-towners, leading to strong ties that last for years.

NABO, the North American Basque Organizations, has been running the camp since 1975 and many camp alumni run into their Udaleku friends at different Basque festivals across the West. A marriage or two has even resulted from friendships that started at camp.

Maria Toretta and Teresa Echeverria ran the two-week camp, which has not been in Bakersfield since 2005. Originally, they were only going to allow 80 kids to attend, but there was a huge waiting list. “We started looking at the list and I didn’t want to deprive anyone,” said Toretta. Eventually, they accepted 102 youth, who had to be between the ages of 10 and 15 to attend.

Next year Udaleku will be in Elko, Nev. Many of the campers are already talking about attending next year.

Naturally, many of the kids in this year’s camp are from Bakersfield. Monique Heguilustoy Flesher of Salt Lake City notes that over half of the local kids “have never been to camp before,” so she has kept very busy, teaching them all how to play mus. She ran a tournament won by Kaiet Ysursa and Janet Echeverria.

Mus is a highlight of the camp. Maddie Reyes, Whitney Willey and Elise Rose all said their favorite activity is mus.

“I like the competition, bluffing and lying,” said Reyes, 14, of Bakersfield.

Most of the teachers at the camp are brought over from the Basque Country. Irati Del Rio is teaching txistu, a recorder-like instrument. This is her first time in the United States and she is enjoying the camp a lot. “Everyone is so friendly,” she said.

Asked about Bakersfield’s hot weather, which reached 100 degrees on a couple of days, Del Rio says she doesn’t mind. The weather in her hometown of Vitoria-Gasteiz in the province of Araba has been really cold. It even snowed once in May. So to open the curtain and see the sun is wonderful, she said.

This year’s activities included a visit to a local dairy, bowling, roller skating, and ice cream at the popular Dewar’s candy shop and soda fountain. The Woolgrower’s restaurant hosted the kids for dinner one evening and a local Basque club member held a pool party at her nearby ranch home for the large crew.

Toretta, who was once a middle school principal, and Echeverria worked hard to make the camp successful.

“I was here until 10 o’clock every night,” noted Toretta. “I got donations and expertise from local members of the club. You need support to really make it fabulous.”

The camp ended with a dinner and performance at the Kern County Basque Clubhouse Friday June 28, attended by more than 400 family members and friends. The next day many of the campers also performed at the annual Sheepmen’s picnic, also held at the club. 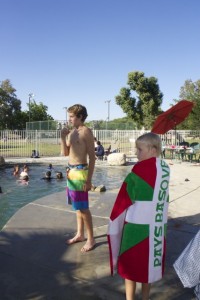