Summer Festivals in the Basque Country 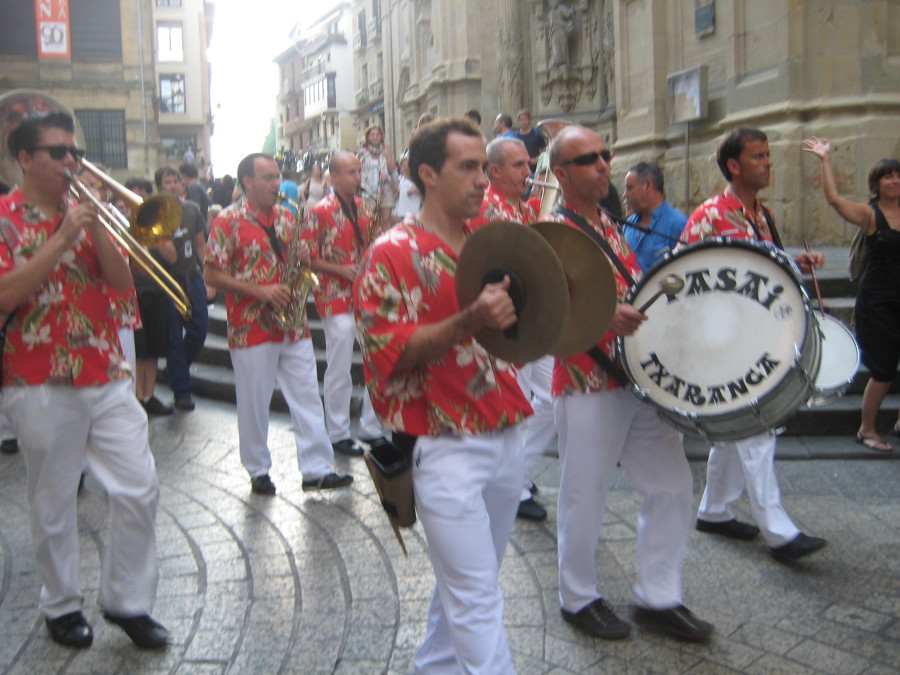 Peñas or small bands parade through the streets during the festivals.

Festivals in the Basque Country

Les fetes, las fiestas or jaiak: a summer visit to the Basque Country would not be complete without hitting a local festival. Every Basque town has its traditional annual festival and the list is endless, since there are so many towns, and bigger cities have several festivals. In fact, even neighborhoods have festivals! So as you make your traveling plans, consider which nearby festivals you might attend.

Most of the Basque festivals are scheduled around the feast day of the patron saint of each town, according to the Roman Catholic calendar. For example, big feast days are St. John (June 24), Santiago Apostol (St. James) on July 25 and the Feast of the Assumption on August 15.

The Basque festivals feature traditional music, typical local food, folk dancing performances, live bands, public dances, Basque sporting events, fireworks and a myriad of other traditions, depending on the town. The Fetes de Bayonne is among the largest in France, while the San Fermin festival in Pamplona is known worldwide, showing that the Basques know how to throw a party!

Here are just a few of the best known, listed in chronological order. The festivals are usually held on the same day or weekend every year. Keep checking back, because this listing will continue to grow as Euskal Kazeta researches the many festivals and provides you with links to helpful festival websites.

Tell us the dates of any Basque Country festival in the comments below and we’ll add them to the list.

The names of the cities are listed in Basque first. The weeks listed start on Monday, since festivals often extend over the weekend.

IPARRALDE (north side) – French side of the Basque Country

Fourth week of June
Donibane Lohitzun/St Jean de Luz
Fetes de St. Jean- This is the biggest and probably best of the summer festivals that take place in the beach resort town of St. Jean de Luz. Centered around the summer solstice (and longest day of the year), this festival is celebrated with beach bonfires, music and dancing. Residents will be dressed in traditional red and black garb. Starts on Thursday and runs through the weekend.

Second week of July
Donibane Lohitzun/St. Jean de Luz
Fetes du Thon – The Festival of Tuna (Saturday) is yet another celebration of the bounty coming from the sea near St.-Jean-de-Luz. The streets fill with Basque music and dancing – and best of all, lots of stalls selling sizzling hot tuna steaks. Yum. St. Jean parties are known for their toros de fuego running through the streets.

Hendaye
Fete du Chipiron – Always held on July 13, this is a food-tasting feast of the baby squid delicacy.

Donibane Lohitzun/St. Jean de Luz & Biarritz
Bastille Day – While there are celebrations all over France commemorating the national holiday on July 14. the seaside resorts of Biarritz and St.-Jean-de-Luz feature fireworks over the ocean and lots of dancing and celebrations.

Fourth week of July
Baiona/Bayonne
Fetes de Bayonne – It always starts the fourth Wednesday of July, at 10 p.m. in front of the Place de la Mairie, where celebrities throw out three keys to the city. The five-day festival — the biggest on the French side — includes courses de vaches (running of the bulls in a ring), tamborrada (drumming parade), live bands and dancing in the evenings. More info.

Mauleon/Maule-Letxarra
Fete de l’espadrille – celebrates the espadrille in the town famous for its handmade production of the rope-soled shoe. August 15

READ What is the Basque Country?

HEGOALDE (south side) – Spanish side of the Basque Country

Eibar
Fiestas de Eibar – These festivities last over a week.

First week of July
Irunea/Pamplona
San Fermin Festival – Without a doubt, the biggest festival in the Basque Country. Visitors come here from all over the world to enjoy this non-stop week-long party that starts with the famous txupinazo rocket on July 6. The highlight is the daily running of the bulls at 8 a.m., which gets more crowded with runners every year.

Donosti/San Sebastian
Karmengo Jaiak – Festival of the port of Donosti. Events start on Tuesday, heat up on the weekend, and include a greased mast competition.

Vitoria-Gasteiz
Día de la Blusa – This festival, held July 25, is named after the smock that men wear on festival days and is known as “garlic day.” Stalls along San Francisco street sell garlic products and locals are expected to buy a string of garlic and wear it all day.

First week of August
Vitoria-Gasteiz
Festival de la Virgen Blanca – Six days of fiestas that start with the six o’clock chimes and the lowering of the character Celedon from the tower of San Miguel. They end with his climb back up the tower at 1 a.m. of the seventh day. More info.

Third week of August
Bilbo/Bilbao
Semana Grande or Aste Nagusia (Big Week) – Starts on the Saturday following Aug. 15 with the arrival of Mari Jaia, patron saint of the festival. The festival continues for 10 days with live music every night at several different locations.