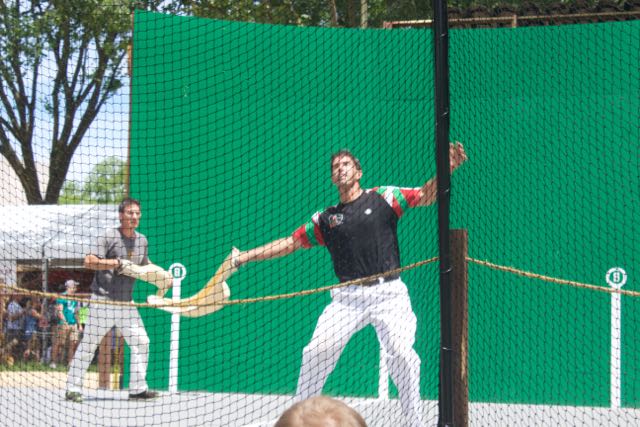 Historically, the handball court or fronton was at the center of Basque village life and later of almost every Basque community in the United States. In a similar way, the court, identified by the Smithsonian by its Basque name “frontoia,” became the focal point of the Smithsonian Folklife Festival: Basque: Innovation by Culture.

“We spent quite a bit of time — a month and a half — in the shop and on the mall,” creating the frontoia, said Tyler Nelson, the technical director of the festival.

Basques have traditionally used the fronton as a setting not only for pilota, but also for parties, dancing, and other activities. In a similar way, the Folklife Festival is also using the frontoia as one of its primary stages. Folk dancing and log chopping have been taking place at the Frontoia, in addition to pilota.

Building the handball court was the first job given to Nelson when he was hired as director in December. Read the Smithsonian’s article on handball courts.

“That immediately set me up for a pretty big challenge,” said Nelson, during an interview with Euskal Kazeta. The Smithsonian didn’t have the budget for a masonry wall that is typically used, so they opted for wood. Nelson noted that for his technical team, the court was “the center of the workload for sure. We managed everything else around it.”

The biggest initial obstacle was meeting the requirement for structures placed on the National Mall. It had to be able to withstand 3-second gusts of 90 mile-per-hour winds, said Nelson. “It’s like a wind tunnel here,” he said of the lengthy flat grass-covered Mall. “We have an excellent opportunity for wind to travel in a straight line.”

They started with a steel skid or base that weighs 3,000 lbs. Brackets and receivers were welded to the skid to connect with the beams and timbers that would hold up the frontoia walls. On top of the skid, they decided they needed 26,000 lbs. of ballast to hold the walls of the structure down. Later, they realized they needed twice as much. The ballast took the form of sand, covering the steel skid. The Smithsonian hopes to reuse the skid and the timbers used for the court for future programs.

Nelson visited the Basque Country for a week in February, “to see what the Basque culture and traditions were all about.” During his trip he saw a unique bowling tradition on a dirt alley that he later decided to incorporate into the frontoia structure as well.

Along the long left wall, they decided to create planters to connect to the timber frames that formed the roofing over the bowling alley. They covered the side roof with plastic tiles created to mimic ceramic tiles used in Spain. The four planters were filled with 7,000 lbs. of dirt each, and pepper plants were put in. A hinge system is incorporated into the entire structure, which allows the walls to be taken down in five minutes, if weather conditions required it, explained Nelson.

As part of the process, Nelson’s team also talked with experts who knew about pilota, to be sure the games could be played on the wooden court. Xavier Berrueta, president of the U.S. Federation of Pelota, was consulted.

“Because of it’s being wooden, we had to modify what we displayed,” said Berrueta, who is an emcee for pilota exhibitions at the festival along with pilota player Esther Ciganda. The players had to bring special balls that bounce differently.

“I think it’s a fabulous piece for playing on and demonstrating different aspects of our culture,” said Berrueta about the court, although he added that because of its necessary limitations, “it only shows a snapshot of our sport.”

“They seem to be having fun,” said Nelson, “and the audience seems to be enjoying it.” Berrueta and Ciganda were fielding non-stop questions about the games.

Berrueta said the sport of pilota, which includes jai alai, handball, and paleta goma, among others, is evolving. If it were limited to the Basques who play it and the specific games they play, the sport would likely die.

The goal of the Basques should be to leave a legacy and keep the sport going, even if it changes from the way they have played it, noted Berrueta.

“We have two girls from Brooklyn today playing frontball,” said Berrueta the first week of the festival. “Is it Basque? No. Is it a fusion? Yes. And it is beautiful. And that is the direction we need to be going in,” he said, noting that the festival’s title “Basque: Innovation by Culture,” aptly described what is happening in the field of pilota.