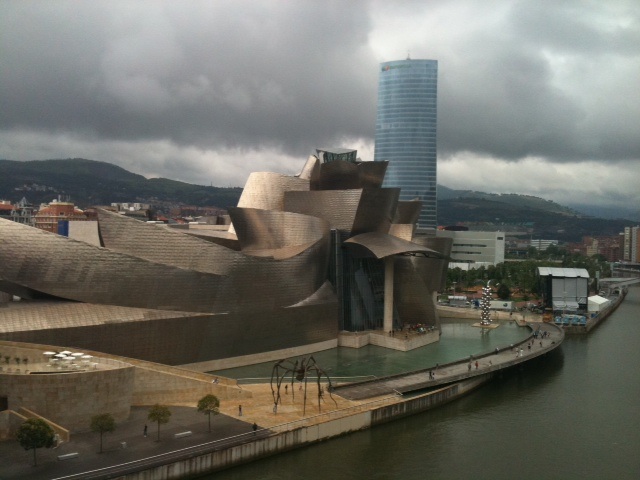 The Guggenheim Museum seen from the Puente de la Salve.

My trip to the Basque Country did not include a long to-do list. I haven’t been here in 16 years, yet when I arrived two weeks ago, I did not feel compelled to do a lot of sightseeing. I only wanted to attend a family reunion and visit with friends. Wiith the exception of one excursion: a visit to the Guggenheim Museum in Bilbo, as Bilbao is called in Basque.

When I was in Europe before, in 1995, the plans for this massive architectural jewel were already in the works and quite controversial. The primary question then: Why Bilbao?

I had previously spent quite a bit of time in the Basque Country – mostly in Iparralde – the French side – where my immediate family is from, and a bit in Gipuzkoa. Never in Bizkaia. Bilbo had a tradition of being a very industrial city, and I was told factories poured their wastes into the Nervion River that runs through it. Local friends did not encourage me to visit, claiming there wasn’t much to see here.

The construction of the Guggenheim changed that image. The museum, which opened in 1997, has brought millions of new visitors. The biggest Basque city has become a must-see stop for international travelers.

In fact, it is referred to in news reports as “the Bilbao effect” -– the regeneration of a city, led by art. 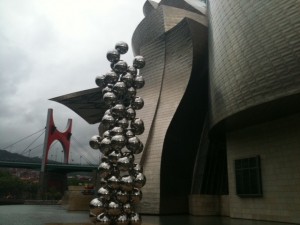 “Despite attempts to emulate the ‘Bilbao effect’ elsewhere in the world, very few new museums or galleries outside capital cities have succeeded in getting so many visitors. Gehry’s architecture and the Guggenheim’s art have proved an irresistible combination,” a Forbes magazine declared in 2002. This article unfortunately does not take into effect what I call “the Basque factor.” The Basques have survived over the centuries because of their ability to take what is there and work hard at making it better, yet making it theirs at the same time. (The Basque Country is an economic cornerstone of Spain. Those who left have found economic success and perpetuated their culture in their new homes.)

Admittedly, none of the exhibits we saw were specifically Basque. Yet that is as it should be. The museum is international in scope. However, the Basque influence is ubiquitous. The explanations for all exhibits are in Spanish and Euskera. The main signs for visitors are in Spanish, English, French and Euskera.

The exhibits accomplished their objective. No easy explanations for most of these modern, unusual artistic installations lead visitors to wonder what is the point and question their own thoughts and ideas. The majority of the exhibits we saw were part of “The Luminous Interval,” a private collection of contemporary art that will be here through Sept. 11.

The best feature of the museum is without a doubt the building itself. Inside and out, the design creates different, magnificent views from every single spot. Architect Frank Gehry explains through the free multilingual audio guides offered to visitors that nothing except the floor is straight. All lines curve. Much of his inspiration for the museum’s design, he relates, came from the fish he brought home from trips to the market with his grandmother, then put into the bathtub until it was time to cook them. 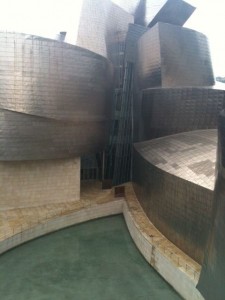 Gehry explains too that part of his goal of placing the museum on the edge of the Nervion River was to have the building itself bring people to its doors. Our personal experience is a testament to his success.

The museum is fairly easy to locate because of its high visibility from many parts of the city. We parked on the north side of the river in a parking structure under the elegant Hotel Hesperia. After thoroughly enjoying a classic almuerzo at the Cafeteria Mandobide in the Plaza Funicular, we were directed by the friendly manager to the tree-lined walkway along the river then up the elevator to the top of the Puente de la Salve, built in 1972, whose red arch was added in 2007 by artist Daniel Buren. At the top, we had a stunning view of the shiny titanium-plated architecture.

The picturesque bridge, which is a sight to see in its own right, led down to curving sidewalk around the building to the front of the museum, where a pink, red, yellow, purple and white-flower-covered puppy greets visitors. During our visit, many windows and skylights encouraged us to look upward and down. Glass doors in the museum lead to many open spaces where sculptures, water and views encourage visitors to linger. It was a rainy day in the middle of the summer – a moment likely to create a packed house. Yet the Guggenheim never felt crowded, due to the many options and directions available at any point in time.

Our visit to the museum led us to extend our visit to other parts of the city, as it is intended to do. After the Guggenheim, we went to visit the Casco Viejo, the original citadel where the city began, which dates back to the 15th century. The historic stone buildings flank the pedestrian-friendly walkways, similar to those of old Baiona and Donostia. We found good prices in the stores, including a couple that sold traditional Basque costumes and shoes. Well-placed signs explained various historical points of the city’s center, some which date back to the Late Middle Ages. Signs posted on barricades around ongoing construction of an obviously historic building note “Bilbao Berri” (new Bilbao). We had a hard time choosing a place to eat from the variety of bakeries, cafes and bars. By chance, we lunched late at a restaurant in one of the oldest buildings of the quarter – the Palacio Arana. Twin Hercules were carved in stone over the arched doorway leading to the building’s patio.

All aspects of our encounter with this city were extremely positive. We opted to fly in to the Basque Country via Bilbao, and after leaving the small, easily navigable airport with our rented Hertz car, we followed well-marked directions to the city.

Street parking here is practically non-existent. Looking for a place to stop to look at my map in order to find our hotel, I pulled into a bus stop. Within 30 seconds, a police car had stopped alongside me. I told the two officers in Spanish that we were looking for our hotel near the Jardines de Albia. The officer driving told me to follow him and led me through the city to the small park. He got out of his car to point out the Jardines. When I asked him about parking, he told me “Sigueme.” I followed them around the park. He got out of his car again, told me to take the spot where a car was pulling out and pointed out a nearby hotel that might be mine. I asked him if all police here were so friendly and he admitted that probably not, “pero deberían serlo” (they should be). They waved away another car that wanted to take the empty spot, then drove away.

We had made our hotel reservations online, choosing the Spa Husa Jardines de Albia because of the economic prices it offered. We ate croquetas, bocadillo de jamon and tortilla de patatas at the Bitoques de Albia, a bar that has earned several awards in recent years for best pintxos. My daughter said the toasted croissants and hot chocolate we ate the next morning at the sidewalk café next to the Jardines was her favorite breakfast of the trip.

On the same street as our hotel we discovered the Gabriel Aresti Euskaltegia, a language school visitors can attend for short sessions to learn Euskera. I had been looking for just such a school so I can learn some Basque. A friend told me the Bilbao school is very well-known.

All in all, the Bilbao effect, coupled with the “Basque factor,” made our visit to this cosmopolitan city one we will readily repeat.