The Film “Guernica”: A must-see for Basques 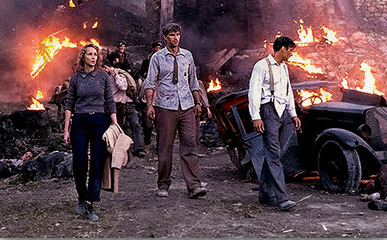 The 2016 movie “Guernica,” available on Redbox and for purchase, is based on the perspective of a New York Times journalist (James D’Arcy) on assignment in Bizkaia during the days leading up to and after the market day bombing massacre of Gernika.

The film, by Basque director Koldo Serra, is based on the journalist’s first-hand account of the bombing by the German Luftwaffe and the Italian fascists at Spanish Dictator Francisco Franco’s invitation. It is the first feature-length film on the pivotal event.

It shows some great footage of Bilbao, Gernika and other rural and coastal areas around Bermeo, etc. Of note is a scene where the foreign journalists are taken on a tour of Gernika days before the bombing, a scene right in front of the Junta and Gernikako Arbola where a txistulari with tambor and a Basque traditional dancer in full regalia performs a classic dance in the court yard. You hear dialogue in Spanish, English, Euskera Bizkaitarra (sometimes a little muffled, maybe due to colloquial regionalism), but one does catch common simple Basque phrases.

You get a look into the German air camps in Burgos preparing for their nefarious assault on the innocent little town, receiving briefings from their superior command in German revealing some insight on their patriotic motives for bombing the little town and saving face and atoning for their losses and shame from the “great war.”

This film was produced in northern Spain with a cast and crew replete with Euskaldunak. It is from the perspective of foreigners in the Basque Country and how different nationalities were juxtaposed in a conflict that was a harbinger of worse things to come, but the world turned a deaf ear.

MORE STORIES FROM EK ABOUT GERNIKA

“Guernica” is One of this Artist’s Favorite Basque Books

The film starts out a bit slow, there is some interaction between a Spanish journalist and a bespectacled man that at first, I was wondering, appeared to be Lehendakari (Basque president) Jose Antonio Aguirre. But then it became apparent this “maketo” is a member of the Nazi party on Basque soil (Jack Davenport) in a press office, who seems to have feelings for the young Spanish lady working in the office (Maria Valverde). She obviously is navigating between his attentions and those of the American journalist with whom she develops a relationship in time. There is also a daring young foreign photographer who takes every risk at filming footage of the war and on a number of occasions almost loses her life for her maverick tactics in capturing the moment.

There are snippets of authentic life of the baserritarrak and kaletarrak throughout the build-up of the film. In one scene, a Basque street vendor in the market refuses the patronage of a Spanish fascist woman who comes to his stall to buy produce, telling her I won’t sell to your kind, and she responds back to him almost in warning.

With the air raid scene, things start moving faster, with the horrific scenes of carnage and destruction, people scurrying from bomb shelter to other coverings as the Luftwaffe Bunkker buster bombs prove to be formidable weaponry against this humble defenseless community.

This film is a definite must-see not just for Basques and Spanish alike but for all who need to be aware of this most infamous moment of history where the Western world turned a blind eye and a deaf ear. I often wonder if they had paid attention to this thunderous prelude to World War II, would the Nazis had been stopped from marching into Poland in 1939 and later France, followed by the rest of Western Europe? Also think of the millions of lives, Jewish and many others that were extinguished in the Holocaust of racial cleansing. Now in 2017, have we learned enough to prevent a replay of such a dark history?

“Guernica” is available to rent on Redbox and Itunes, and also for purchase on Amazon and other major outlets.

According to an article from the  Guardian, the movie was originally called “Gernika,” using the Basque spelling and some movie posters reflect this spelling. However, on Redbox and other English-language video outlets, the movie is referred to as “Guernica.”