Three Generations Play in the Klika 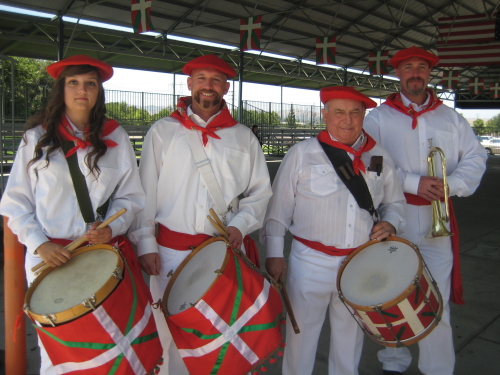 For the Aguerres, the family that plays together, stays together. Plays in the klika, that is.
Three generations of this Basque family play the bugles and drums for the Chino Basque Club klika.
“We’re born into it,” said Charlot Aguerre. “It’s in our blood.”

Charlot has been playing the snare drum at the annual Basque festival here since he was nine. That makes over 30 years he’s been in the Chino klika. Asked how he got started, he admitted with a laugh, “I didn’t want to dance,” referring to the folk dance group many Basque youngsters participate in.

His brother Andre Aguerre plays the bugle. Their father, J.B. Aguerre, plays the snare drum, too, as does his daughter Monique. The three generations are always in the klika parade, a highlight at the Chino Basque Club festival, held the same day every year, on Sunday of Labor Day weekend, at the Chino Fairgrounds.

Klika is a band of bugles and drums, a musical tradition that developed among French Basques. In the French military, Basques were often recruited for the military bands because of their culture’s reputation for musicians. They often returned home and started a village band, today referred to as klikas. J.B. Aguerre played the drum when he did his service in the French army.

Basque immigration to California was dominated by those from Iparralde, the French side, which influenced the traditions that developed locally. Groups of Basque men started klikas in Bakersfield, San Francisco and Chino, mostly in the 1960s, and these bands have continued through the years.

“I started at home with my dad,” recalled J.B. Aguerre, noting that his father started a klika in his hometown in St. Esteban, France. His grandfather also played the drum. Over the years, J.B. has also been president of the Chino Basque Club.

Monique Aguerre, the fifth-generation klika player, has been playing since she was 12. In her case, she also learned the Basque dances. As a result, admits her grandfather, “she’s a little better than all of us.”

The Aguerres claim playing the snare drum for the klika is easy.

“I learned in the parking lot before mass,” said Monique. Do they ever practice? Playing during the celebration masses – that’s their practice, they joke.

The four Aguerre klika players admit they are proud of carrying on a Basque tradition. Andre hopes one day his children will play for the klika, like his brother Charlot’s daughter Monique. But ultimately, the Aguerres do it because they like it.

“We enjoy the music and playing together,” said Charlot.