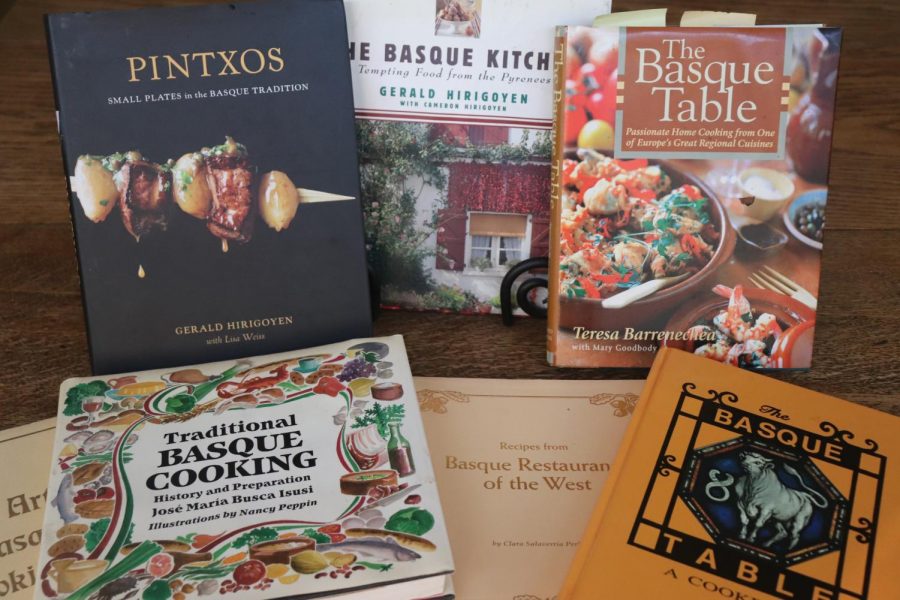 Many Basque cookbooks have been published over the years.

The fondness for Basque food has led to many Basque cookbooks over the years. I currently have nine in my cookbook collection, all of which are available on Amazon. Read our reviews of these Basque cookbooks, published in the U.S., to help you decide which one might be right for you. I am listing them in order of preference.

**Disclosure: links below are affiliate links which means at no additional costs to you, we earn a commission if you click through and make a purchase. These are all products that we recommend.

This is the newest Basque cookbook and it immediately jumped to the top of my list. Author Marti Buckley, a cook and blogger who lives in Donostia, has written a great cookbook, which she has dedicated to the Basques. Her writing is down-to-earth, but full of well-observed details about the Basque Country. It’s obvious she’s very familiar with the Basque culture. The photographs are great and the book is top notch.

What about the recipes? Well, Buckley tells the reader: “My intention with this book is to present the real, traditional recipes of the Basque Country. You won’t find avant-garde versions of dishes or concessions to global tastes, like adding a bit of black pepper or squeezing lemon where it doesn’t ‘belong’…The recipes in this book are the recipes of the Basque Country.” Check it out for yourself. Click here to buy “Basque Country: A Culinary Journey Through A Food Lover’s Paradise” from Amazon.

The photos in chef Gerald Hirigoyen’s cookbook are beautiful and enticing. His choice of recipes reflects the variety of dishes eaten in the Basque Country. He also gives a little background or tips on many of the recipes. I might be partial to Hirigoyen’s first book because I know him personally and he has a charming personality. I also appreciate the fact that the chef of the renowned Piperade Restaurant has a strong connection with the San Francisco Bay Area Basque community and occasionally participates in local Basque events.

, given five stars by many Amazon shoppers.

Click here to buy Hirigoyen’s cookbook from Amazon: The Basque Kitchen: Tempting Food from the Pyrenees

Porrusalda and Other Basque Soups

3. Recipes from Basque Restaurants of the West – Clara Salaverria Perkins
1995

We recently moved this cookbook up to Number 3, from its previous spot in Number 4. Some of our favorite Basque dishes are the ones we’ve eaten at Basque restaurants throughout the American West. Clara Salaverria Perkins went to the trouble of collecting recipes from chefs at 33 of these restaurants, several of which no longer exist, such as Arnaud’s in Winter, Calif., the Basque Hotel in Fresno and Des Alpes, San Francisco. This is Basque comfort food at its best. We are familiar with most of the recipes.

This is not a fancy book — it’s ring-bound with a sturdy paperback cover. But the historical information about the Basque restaurants is invaluable and the recipes are well presented, with drawings and a few photographs. This book is no longer available from Amazon, but you can find it on the Etchepare’s website, Basque Imports.

During the 1990s, chef Teresa Barrenechea ran the popular Marichu’s restaurant in New York City, and she later opened a second restaurant nearby in Bronxville. They have since closed. She grew up in the Basque Country, spent several years in the U.S. and has now returned to Spain.

Her cookbook is easy to read, with large print, and her book includes interesting tidbits about Basque culture and food. It doesn’t have any photos, but the recipe titles are straight-forward and let you know what you’re cooking, like “Fresh Tuna, Potato and Green Pepper Stew,”  and repeated with their original name in Spanish or Basque (Marmitako Arrantzale).

To buy it from Amazon, click here: The Basque Table: Passionate Home Cooking from Spain’s Most Celebrated Cuisine.

This cookbook is written by a daughter-in-law of Fermin and Agustina Alustiza, an immigrant couple who built and ran the Alustiza’s California Hotel in Stockton, initially with partner Saturino Garamendi (grandfather of Congressman John Garamendi), from 1924 to the 1980s. Alustiza provides some wonderful history about the Alustiza family, plus background on the Basque culture. However, most of the book is dedicated to the “Treasured Recipes of the Alustiza Family,” which reflects many of the dishes that were served in the boardinghouse, which Basques referred to as a “hotel.” Many of them are “comfort food” fare and fairly easy to cook. I’ve made many dishes from this book, often finding all of the necessary items in my pantry.

To buy the book from Amazon, click here: The Basque Table: A Cookbook.

This is not officially a cookbook, but it is a mandatory read for anyone seriously interested in Basque cuisine. Of the book’s 189 pages, the first 120 are dedicated to the history of food in the Basque Country; what meats, fish, fruits and vegetables are native to the region and how certain styles of cooking developed. Considering how highly regarded Basque food is globally, this history by Busca Isusi is an important addition to the libraries of cooks and historians, to provide the background of the culture’s food. The book is translated from the original book written in Spanish, also in 1983.

A possible prophetic quote from his book: “…it could be that we are the last generation to boast of having eaten in a healthy and decent fashion. Already, a dawn is foreseen with its horizon full of synthetic products, artificial flavorings, etc.” By reading this book and following some of the recipes from the books on this page, perhaps we can avoid a food armageddon.

Unfortunately, copies are no longer available on Amazon (May 2021).
Perkins, who grew up in Winters, Calif., tells the story at the beginning of this cookbook of her trip to her parent’s hometown of Goizueta, Nafarroa in Spain, where she was welcomed by several neighbors with delicious five-course meals. She decided then that she would eventually return to write a cookbook. She did return in 1980 and collected those recipes, visiting with families and cooking with them in their homes. When she returned to the U.S., she repeated the recipes, in order to adapt them when certain ingredients were not available here. The result is a collection of traditional Basque dishes of meat, seafood, soups and numerous desserts.

Buy it here from Amazon: The Art of Basque Cooking.

8. The Basque Book: A Love Letter in Recipes from the Kitchen of Txikito – Alexandra Raij with Eder Montero
Ten Speed Press 2016

This is among the most recent Basque cookbooks published in the U.S., but unfortunately doesn’t rate as high as the ones listed above, because of the complexity of its recipes. It’s written by the owners of the celebrated Txikito Restaurant in New York City — husband and wife team Alexandra Raij, an Argentinean Jew from Minnesota, and Eder Montero from the Basque Country, both trained chefs. The recipes are described as classic time-honored recipes as well as recipes that are modernized. Raij says Basque cooking celebrates single ingredients, but admits that “simple” cooking does not mean easy. I take her at her word, because many of the recipes seem complex.

Most of the seasonings require purchase of special ingredients. But the large variety of recipes in the book (and the great photographs) means there is something for everyone. For example, Braised Flat Beans (Vainas y Patatas) and Grilled Head-on Shrimp (Langostinos a la Plancha) seem easy, as long as you replace the exotic Maldon salt with Himalayan or some other version you can find at your local store.

To buy it from Amazon, click here: The Basque Book.

Pintxos — the small bites typically served on a slice of fresh French baguette — have become very “in vogue” in the Basque Country in recent years. Donostia (San Sebastian) is famous for the numerous pintxos restaurants in the Parte Vieja neighborhood. Hirigoyen has put together a collection of recipes of these small bites. He says he was inspired to write the cookbook when he threw together a dinner with several pintxos after his wife spontaneously brought some friends home.

While one pintxo dish would be a great appetizer and a number of pintxos could certainly be enough for a meal, many of the recipes appear complex and a lot of work and may be appealing only to the die-hard cook. I love Hirigoyen’s first cookbook, but I suggest getting this book only if you have someone to help you in the kitchen with these recipes or are planning to hold numerous dinner parties. They aren’t your easy throw-together style recipes, despite Hirigoyen’s claim that they are. Perhaps as a chef, Hirigoyen keeps a large variety of items in his pantry, but most of the recipes require the purchase of numerous items. He does make suggestions for wine-pairings with each recipe, so for wine lovers who wish to expand their experimentation, this would be a good cookbook.