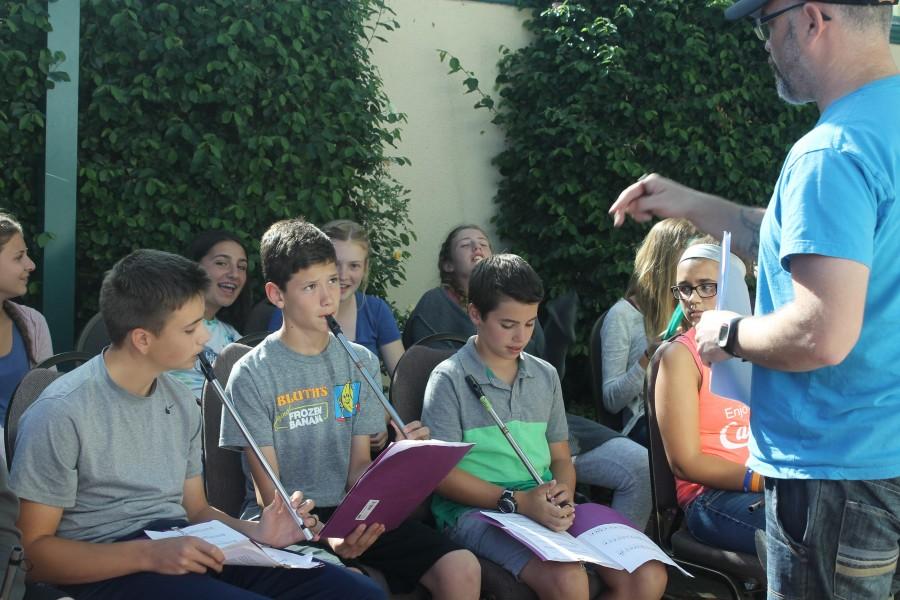 Basque dance teacher Lisa Etchepare attended Udaleku, the Basque culture camp, seven times. Those were the days when campers could attend until they were 18, she remembers. Today, the camp is so popular that campers are limited to ages 10 to 15.

“I love it because you get to meet people from all over,” said Etchepare, who is one of the organizers of the current camp at the Basque Cultural Center in South San Francisco.

Almost 120 campers are attending, from the Western states of California, Nevada, Idaho, Wyoming, Utah and Oregon. A few campers come from the East Coast and one from th e Basque Country. Thirty-five local families are hosting 90 kids from outside the S.F. Bay Area, notes organizer Valerie Arrechea. The camp is held in the San Francisco area every four years, and this is the largest group they’ve ever had, she said.

Every summer the camp rotates to a different Basque community. It’s sponsored by the North American Basque Organizations (NABO), a non-profit group that works to maintain the Basque culture in the U.S. NABO brings teachers from the Basque Country to pass on some of the traditions. The Basque provinces are well represented. This year the students are taking dance and Euskera language classes from teachers from the province of Zuberoa: Patrick Quehille, Elodie Arangaray, and Titika Recalt. Eneko Espino, a professional txistu teacher who is teaching at his sixth Udaleku, is from Vitoria, Araba. Ximun Destaillac, who plays joko garbi in Ustaritz, Lapurdi, is teaching pala and handball. Teachers from the U.S. include pala and handball player Jesse Kvarna, language teacher Virginia Aramburu and txistu player Caroline Izoco Chiramberro.

Campers and teachers switch fluidly between several languages. Campers mostly speak in English, but Quehille easily finds French speakers to translate his instructions to their groups. Teachers speak Euskera, French or Spanish, depending on who they are speaking to. And the Basque Country visitors practice their English with campers.

Gabriella Camou, 10, was enjoying catching a ball with the joko garbi basket, which resembles the jai alai basket, but smaller.

“It was a long drive from Bakersfield to get here, but it was really worth it,” said Camou. “I encourage other people to come and do it.”

The campers are separated into smaller groups for classes, but the teachers sometimes find it difficult to keep the attention of so many at one time. Espino likes to give one-on-one attention when teaching songs on the txistu, but admits it’s hard for the other kids to wait. Nevertheless, by Wednesday of the second week, the kids playing the song “Bonbolontena” sound good. And none of the kids seem to mind the schedule of seven classes a day.

“Udaleku is really fun and I like all the classes,” said Ashley Coleman, 10, of San Francisco.

Ten-year-old Jakob Sarratea of Gardnerville, Nev. agrees. “It’s fun. I like lunch the best,” he joked.

In addition to the classes, camp organizers sponsored a day-long picnic at Angel Island on Sunday, and bowling and park outings during the week. Campers enjoyed activities with their host families as well.

The Udaleku campers will present a final performance at the cultural center on Friday, when parents return to pick up their kids. They’ll play songs on their txistus, present some traditional dances, and perform a “pastorale.

The camp attracts a fair number of older aides, who help the teachers. They are all former Udaleku campers. Alyssa Goyhenetche attended Udaleku six times. She and Mikaela Goicoechea are returning for their first time as aides. Goyhenetche said she’s already making plans to apply again next year. What is their favorite part of camp? The two 16-year-olds look at each other and both agree: “the people.”