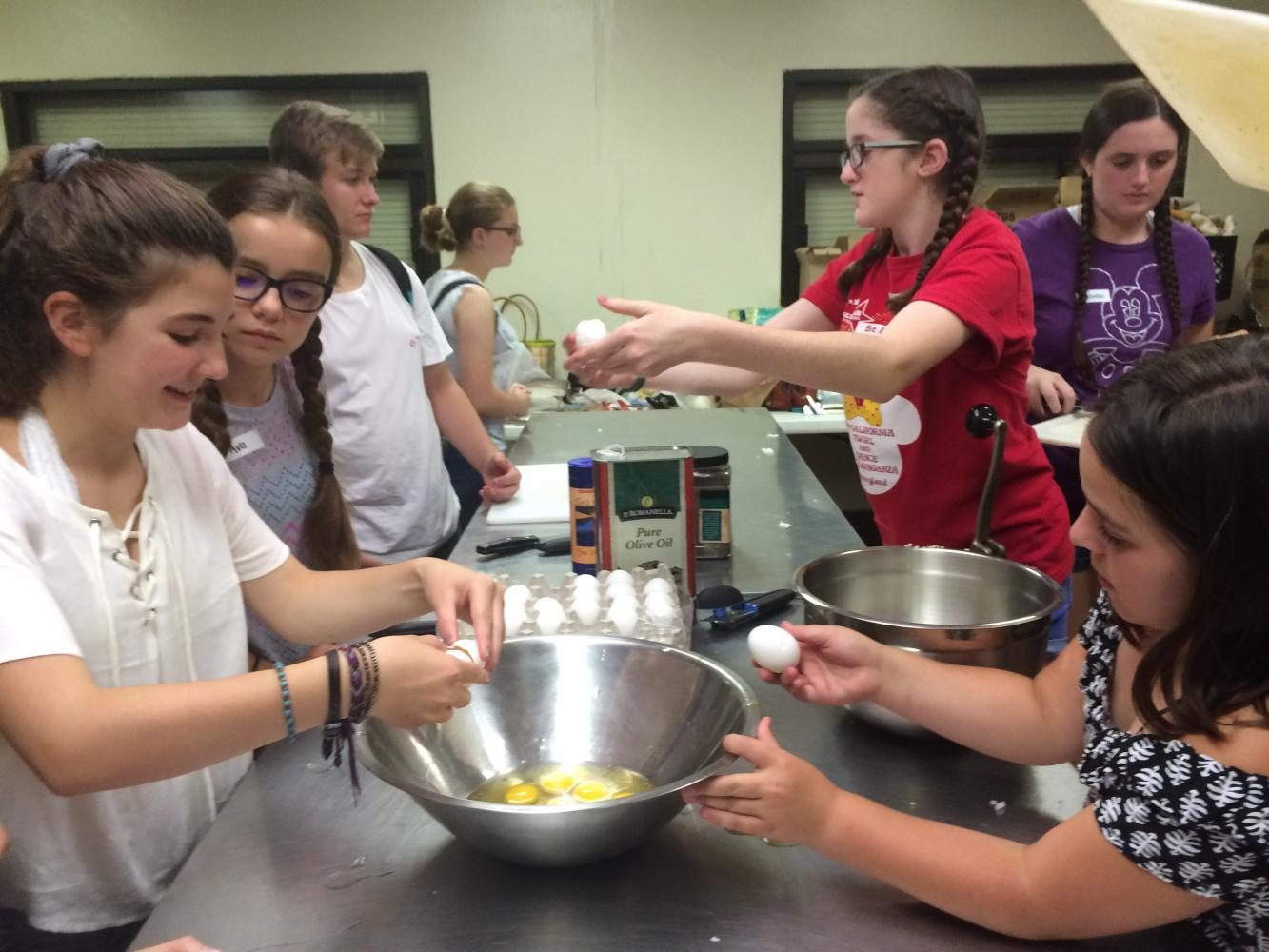 Udaleku is an annual summer camp where youngsters from all over the U.S. gather to learn about Basque culture. One hundred campers, ages 10 to 15, are currently attending the two-week camp which is taking place in Chino, Calif.

The students learn the basics of the recorder-like txistu and pandareta (tambourine), Basque folk dances, plus songs and cultural activities. They also receive lessons in the Basque language, Euskera.

On the first day of class, several parents said their children were extremely excited for Udaleku. The camp rotates every year to a different Basque community, and local families, usually with participating children, host youngsters from farther away. This group is meeting at the Chino Fairgrounds, where the hall was fortunately air-conditioned to compensate for the 100-plus degree weather.

In the afternoon, campers can choose an elective class and on Monday, June 26, about 15 showed up in the kitchen for a cooking lesson from teacher Jenny Ysursa. The recipe for that day was “tortilla de patatas,” or potato omelet, a common dish in the Basque Country, which is often used in bite-sized pintxos.

“The Basque club makes it a lot and it’s really good,” said Maite Frank, 13, who belongs to Txoko Ona of Homedale, Idaho.

“It’s really practical, because it’s easy to slice, easy to pack for a picnic,” said Ysursa. She admitted that she doesn’t make it that often, because potatoes can sometimes be slow to cook. But the Alustiza recipe she chose calls for boiling the potatoes first, which might shorten cooking time in the frying pan.

Ysursa gave quick lessons to the students about cooking and Basque culture as they peeled and chopped. “Potatoes are a staple in the Basque Country too,” she said, noting that many cultures use them because they are cheap and easy to grow.

As she added the spices, Ysursa pulled out a bottle of Piment d’Espelette, a red pepper that only comes from the Basque Country.

“It’s getting pretty popular with well-known chefs,” she said, as she sprinkled some into the beaten egg mixture.

After the eggs were poured in to the potato mix in the pan, Ysursa told the group “It needs to cook slowly so it doesn’t get too brown on the bottom.” When it was done, everyone ate a piece.

“I’ve had it before,” said Jean Pierre Negeloua, “but it’s still just as good,” as he ate a slice.

Peel and boil potatoes in salted water, until just tender. Cut in cubes. Fry in plenty of oil in a heavy skillet, along with onions and the garlic and salt and pepper. (Cayenne pepper adds a little “zip.”) Watch carefully, as you keep turning. Cook until quite golden and potatoes are tender.
Mix in the beaten eggs. As it cooks, loosen the omelet all around the edges with a spatula. When eggs are set and it all holds together and is brown underneath, remove the heat and place a plate face down over the skillet. Carefully flip over onto the plate. Return pan to heat. Scrape pan so particles won’t burn; add a bit more oil. Let the pan heat again and slide the omelet off the plate into the skillet. Cook as before until firm. Remove to platter.

From The Basques in Nevada

From Dorie Greenspan’s book: Around My French Table

Frankie the Basque – The story of athlete Frankie Alustiza, son of Basque immigrant Fermin Alustiza, who built the California Hotel in Stockton, Calif. where this recipe comes from. In Spanish. Frank is listed in the Athletic Hall of Fame of Stanford University.

Alustiza, Fermin and Frankie: Basques in USA – a short biography of these two men. In English and Spanish.