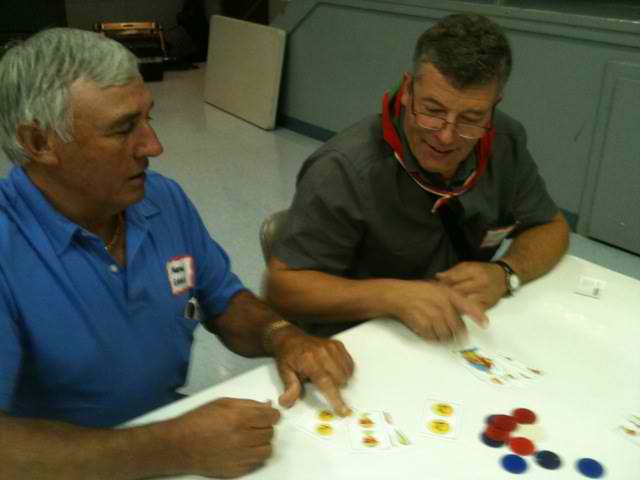 The team representing Euskadi, Angel Rivero and Juan Antonio Vicente, earned the championship title after the 11th game, but they played one more for the tournament, hosted by NABO, the North American Basque Organizations.

“Nobody could beat them,” said Jean Baptiste Bidegaray, scorekeeper for the tourney, of the Rivero and Vicente team. Since the tournament started in 1978, the Euskadi team has won the tournament 15 times.

“I’ve played since I was little,” said Roger Mendiondo, who always has a ready partner in his brother. He and his brother came with their wives, who also enjoy playing mus.

While all the terms for the game are in Basque, Spanish, French and English also floated in the air as the players bet and bluffed their way through the 12 rounds.

The international mus tournament brought players from Argentina, Australia, Canada, Chile, Euskadi, France, Mexico, Peru, Spain, Venezuela and the United States. The number of teams increases or shrinks, depending on who sends a team. Uruguay, Colombia and Navarra have all played in the past, but didn’t have representatives this time.

All the participants are members of local Basque groups. The players are usually the winners of their national mus tournament. The international tournament rotates each year to a different country. Last year, it was in Spain. Next year it will be in France. NABO decided to start a global mus website, to post the scores for everyone to see and announce upcoming news for next year.

Most of the players flew in to Los Angeles on Sunday, Aug. 29, and the tournament started Monday. They played for three days, then took a day off to visit Las Vegas before the final rounds on Friday.

“They did an exceptional job,” said Juan Arrieta of Mexico about the U.S. hosts. He came to the U.S. for the tournament several years ago when it was held in Boise, Idaho. On this trip, he visited Las Vegas for the first time. Arrieta belongs to the Mexico Euskal Etxea in Mexico City, which has about 1,000 members.

On Saturday, the Chino Basque Club sponsored a tournament open to everyone at Brinderson Hall in Chino Fairgrounds, and local Chino players joined the international visitors for more rounds of their favorite card game.

The game is played with a partner and involves betting on different combinations of cards. Players can bluff their opponents into betting on combinations they don’t have.

Mus is the main reason NABO has 42 clubs as members, said NABO mus chairman Pierre Etcharren. Some of the smaller clubs are too small to sponsor a dance group or other cultural activities. But if they host an annual mus tournament, they are bound to get out-of-town members who sign up just to vie for a chance to win a tournament. The winners of all the club tournaments compete at an annual NABO championship, and that winning team gets to play in the international tournament.

“If we didn’t have mus, we probably would have one-third less clubs,” said Etcharren.

Mus chairman since 1977, Etcharren noted that France players used to come to the U.S. to play mus, and in 1978, Spain and France had a friendly competition, and NABO sent players. The following year, NABO suggested they hold a world championship and invite all the countries with Basque communities.

“That was the beginning of the NABO convention on a big scale,” said Etcharren, remembering the huge event in 1979 at Fort Mason in San Francisco, made even bigger because of the international mus tournament.

Never one to think small, Etcharren is trying to attract players from other countries, so the mus fan club can grow even more. “We are going after federations in other countries like England and Italy,” he said, adding that NABO even reached out to a Basque communities in the Philippines and Japan.

“I think it will be even bigger,” said Etcharren.

How to Play Mus